In the years between 1946 and 1958, the United States conducted a total of 23 nuclear tests in the Bikini Atoll area in the Pacific. The first of these nuclear tests was called "Operation Crossroads". During operation crossroads a total of two detonations were conducted codenamed "able and baker". Both able and baker, each yielded twenty-three kilotons. The bombs dropped on Japan during World War II were called "Little Boy and Fat Man" and they were thirteen to eighteen and twenty-one kilotons, respectively.

Operation crossroads was carried out in a lagoon of the Bikini Atoll as a test on the effects to Naval ships and equipment. Two tests were done, the first being test "able", where a B-29 Superfortress named Daves Dream, dropped a fission bomb which detonated at 520 ft above the lagoon at the Bikini Atoll. The second test was done by detonation of another fission bomb suspended from underneath a Navy ship. Over 95 ships were placed for the tests in a large natural lagoon surrounded by the Bikini Atoll Islands, along with other military equipment. There were also some live animals tested during Operation Crossroads.

The Bikini Atolls are a small group of Islands in the expanse of the South Pacific, basically, located between Hawaii and Australia. There were 164-167 indigenous islanders and their Island King, "Juda" that were relocated to another groups of islands. Bikini Atolls is a group of about 23 small islands that form a large circle with a central lagoon, in the Pacific.

The Japanese had taken over the group of islands in 1914, but was left mostly to the local people. Shortly after World War II, the United States controlled the islands and it was to be used for a Naval Ship graveyard.

On July 1, 1946 test "able" was conducted by dropping an atomic bomb from a B-29 and detonated at 520 ft above the lagoon, with a yield of 23 kilotons. Two destroyers, the Anderson and Lamson, two transport ships, Carlisle and Gilliam and a Japanese Cruiser Sakawa were sunk after the blast. The bomb dropped on test "able" missed its intended target by 710 yards. Several other ships and equipment were heavily damaged, but the bomb caused less damage than expected due to it being dropped on a less crowded part of the lagoon.


On July 25, 1946 test "baker" was conducted by detonating an atomic bomb suspended 90 feet in the water, attached to the bottom of the USS LSM-60, which was an amphibious assault ship redesigned for the test. No parts of this ship were ever found. In the test, ten ships, notably the battleship Arkansas and the carrier Saratoga and many others were severely damaged and/ or sank later.

Unlike test able, where the bomb was detonated in the air where the heat of the blast vaporized and "burned up" a lot of the available material, test baker was underwater and produced a massive amount of left over radioactive material. Some considered it the first "nuclear accident" because of this. A huge amount of water from the blast was propelled into the air, only to fall back onto the ships that didn't sink and also back into the lagoon. Attempts to clean the ships, left over from the blast failed and only subjected Navy crews to radiation. A third test codenamed "charlie" was canceled.

Years later, some of the original islanders returned to the islands in the mid 1970s only having to leave a couple of years later due to radiation. Today, some people have been diving some of the sunken Navy ships still in the lagoon. 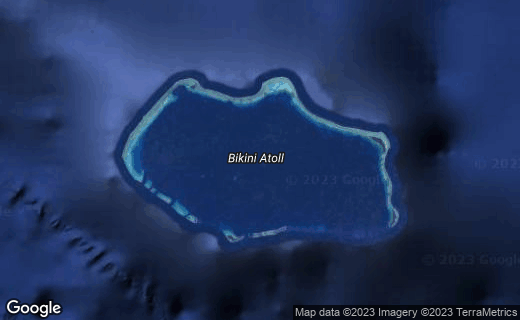