This chapter discusses the importance of focusing on contribution. “The focus on contribution is the key to effectiveness” (Drucker, 2006, pg. 52). I love how this chapter really focused on the results of effort coming from individuals within the organization and not just the effort itself.

In this one chapter I found answers to many of the questions I’ve had about my own business and where we are struggling. Anybody within a company can say or look like they are “busy” at work, however when the ultimate goals of the effort in the first place are not met, the effort is worthless.

Many, if not the majority, of executives in business focus on efforts rather than results, assuming that the time and effort they have invested give them some sort of right to entitlement. “They worry over what the organization and their superiors ‘owe’ them and should do for them. And

they are conscious above all of the authority they should have” (2006, pg. 52). Drucker makes it clear that the only way to truly be effectual is to ask yourself what you can do to contribute to your relationships and to the performance of the organization as a whole. 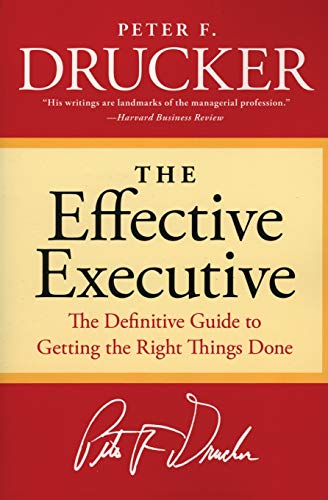 This is probably one of the more difficult areas of discussion in regards to organizations, simply because it is too hard to communicate the need and the skill of communicating effectively.

Just this afternoon I encountered a huge issue in communication as it relates to the way my consultants communicate in different situations. It is difficult enough to teach my girls the non-bureaucratic way I run my business versus the bureaucratic way in which they are accustomed.

In fact, I spend the majority of my time in training, when a consultant first joins the company, teaching them to open up, discuss ideas and thoughts, and be comfortable asking questions. However, “the harder the superior tries to say something to his subordinate, the more likely it is that the subordinate . . . will hear what he expects to hear rather than what is being said” (Drucker, 2006, pg. 65).

They keep tending back towards what they know. They simply want to be told what to do so they can do it. They want to be given work hours, they want me to schedule training, and they take every piece of advice as a direct order that they “have” to do.

What’s humorous though, is just as soon as they learn to start opening up and start contributing to the company in any way, I then tell them that they cannot share everything with their clients. They have to be confident professionals and keep the work details to themselves. I’m always wondering where I have miscommunicated.

Drucker suggests that, from the beginning, subordinates be asked for what contributions that they will make to the company that they should be held accountable. This way, they are setting their own expectations and will more likely take responsibility for them instead of being unclear about what you expect of them.

“The focus on contribution leads to communications sideways and thereby makes teamwork possible” (Drucker, 2006, pg. 66). In our business every person has a direct effect on every other. We may be a bridal consulting business with consultants nationwide, but an impression made in one state trickles down to everyone else.

I’ve had a mother find me at a bridal show and be so impressed that she called her daughter in North Carolina to tell her about our business and she hired us shortly after. I’ve had another consultant in California make a positive impression with a couple who later hired me here in Arizona because they wanted to have the wedding here, and it’s not just positive impressions that have an effect.

When any consultant leaves a bad taste in someone’s mouth after a bad encounter, we all very shortly hear about it through phone calls from the family, reviews on Facebook, etc. and that effects business for each and every one of us.

As Drucker (2006) states, in order for the company to be successful, all of our consultants “must consider themselves responsible for their own competence and for the standards of their work” (pg. 67).

Although, we each deal with a different population of brides from different cultures, traditions and states, we are all on the same team working towards the same goals. Without considering our actions and overall contribution to the company, there is no way our business will be successful.

An effective executive focused on their contribution to the organization will consider what strengths and opportunities they are bringing to the table and what they still need to learn to be as successful as possible.

If they are lacking in English skills, computer skills, or whatever, they will take the initiative to find the professional development or classes needed in order to build their strength in those areas.

I have had one girl on my team that somehow made it through six months of training before I found out that she had no idea how to use Microsoft Word. I have been really shocked at how many adults have made it out of college and don’t have the skills they need to be successful in professional positions.

Well, she had been struggling for a while with just about every aspect of the job but wouldn’t tell me because she was embarrassed. It really confused me why she wouldn’t have taken the initiative to go through the tutorial on Word to make sure that she knew what she was doing so she didn’t have to struggle anymore.

Those individuals with no initiative or understanding of what contribution they are making will never be successful or effective. These sorts of people bring down an organization rather than helping it to reach its goals. “If they demand little of themselves, they will remain stunted. If they demand a good deal of themselves, they will grow to giant stature – without any more effort than is expended by the nonacheivers” (Drucker, 2006, pg. 69).

The only way for an organization to truly be successful, it must be constantly changing and growing, which means that those in the organization must continually be exposed to professional development. “An organization that is not capable of perpetuating itself has failed. An organization therefore has to provide today the men who can run it tomorrow” (Drucker, 2006, pg. 56).

This provides not only for the need for training and refining, but for those in the company to have mentors to answer questions and provide a positive example of what it means to be on the next level. The next generation of individuals “should then, standing on the shoulders of their predecessors, establish a new ‘high’ as the baseline for the generation after them” (pg. 57).

From there, every generation should only get better if we are to truly grow as an organization. This tells me that I not only need to be an example myself, but I need to be setting my expectations higher to demand what I want rather than lower to meet the girls I’m hiring where they currently are in their skill and knowledge level.

“People adjust to the level of the demands made on them. The executive who sets his sights on contribution, raises the sights and standards of everyone with whom he works” (Drucker, 2006, pg. 57).

A focus on contribution sets people in the organization apart. “What he does and how he does it will be materially different” (Drucker, 2006, pg. 53). The further I get into my studies the more obvious it becomes in my own business.

I have wondered why I am not attracting better quality people, but I have not set my standards to the level to reach those people. I wonder why those in my company are not motivated to succeed and grow, but I do not demand it.

Luckily it’s not just me and my efforts to blame. At the beginning of this chapter Drucker discussed the difference between those focusing only on efforts and those choosing to focus on results. I love this quote from Drucker and had to find somewhere to use it.

"The man who focuses on efforts and stresses his downward authority is a subordinate no matter how exalted his title and rank. But the man who focuses on contribution and who takes responsibility for results, no matter how junior, is in the most literal sense of the phrase, “top management.” He holds himself accountable for the performance of the whole" (Drucker, 2006, pg. 53).

Many things are going to need to change along the way to start seeing the results I am looking for in my business.

What did you think of this essay? Was it helpful to you?