Queen of an Era: Queen Victoria

Talk about a study in contrasts; prim and proper in public, witty with a boisterous laugh in private, Queen Victoria ruled England and its empire of 250 million people for 63 years, becoming an icon for an era known for its repressiveness … but if people knew what she had actually been like, the Victorian era might have been very different.

Born in London on May 24, 1819, Princess Alexandrina Victoria was the daughter of Edward, the duke of Kent and Strathearne and Princess Victoria of Germany and granddaughter of George III, King of England, Scotland, Wales and Ireland. Her father and grandfather both died shortly after she was born, and young Victoria endured an unhappy childhood dominated by an overly controlling mother. When she was 18, Victoria inherited the throne of England after the deaths of her uncles, none of whom had a legitimate heir of their own. As her very first act as queen, Victoria immediately moved out of her mother’s chambers. She had little contact with her mother for the rest of her life afterwards, and it wasn’t until her mother’s death did Victoria learn how much her mother loved her.

Victoria soon found herself in a difficult position; as queen, she ruled an empire of millions, but she lived in a time when women were supposed to be fragile, demur, weak creatures, never to be seen in positions of control and power. Victoria managed to maintain the decorum of a proper lady while never relinquishing an inch of her power. She pretended to hate being queen, publicly claiming that it was not fit for a woman to rule, but privately writing in her secret diaries, “I delight in this work!” She commanded respect from everyone, from her 445 palace servants to the members of the nobility and government, and if anyone attempted to influence or control her, she would declare fiercely, “The Queen will not be dictated to!” and punctuated the statement with a stamp of her foot or angrily sweeping off all the items on her desk onto the floor.

As queen, Victoria’s primary duty was to supply an heir to inherit her kingdom. That of course meant she had to marry, but Victoria was reluctant; to marry meant losing some of her power to her husband, something she wasn’t eager to do. She took her time selecting a husband, eventually proposing to her cousin Prince Albert of Germany when she was twenty years old. Albert not only became a loving and supportive husband to Victoria but also became her best friend and partner in ruling the British Empire; they worked at adjoining desks and Albert always had a neat stack of papers ready for Victoria’s review. “He is perfection,” she once wrote. They had a highly active sex life, producing nine children after difficult pregnancies. After her last infant was born, the royal physician advised Victoria to not have any more children, to which the worried queen asked, “Can I have no more fun in bed?”

Despite her own difficult childhood with her domineering mother, Victoria proved no different in the lives of her own children; every night before they went to bed, each prince and princess was brought one by one to Victoria’s chambers so that she could test them on their lessons and manipulate their behavior. She tried to control every nuance of her children’s lives, even arranging every one of their marriages, but showed little in the way of love and affection to any of them, criticizing more often than praising, causing deep rifts to grow between them. Still, it hurt Victoria deeply when she had to send her daughters away to be married.

When Victoria was 42 years old, Albert saw one of their sons outside playing in the rain and went outside to scold him. Shortly afterward Albert developed a cold that turned in pneumonia, killing him. Victoria was absolutely devastated, blaming Albert’s death on her son and never truly forgiving him for it. Unable to cope with the loss, Victoria kept Albert’s room exactly the way it had been when he died, slept with a plaster cast of his hand in her bed, always wore a miniature picture of him on a necklace (often holding it up so he could “see” what was going on around them), and forever wore black afterwards. Desperate not to lose any contact with Albert, Victoria then became close to Albert’s servant John Brown, a handsome Scotsman, causing rumors to go around that the two were secretly married, though no such evidence exists, and began to experiment with séances and other occult sciences in attempt to communicate with her dead husband. It was several years before Victoria recovered enough to resume her duties as queen.

Victoria ruled for another 40 years, living by her claim that her “vocation was to be that of trying to do good in the world.” She was Protestant, but was tolerant of all religions. She hated racism, and praised Harriet Tubman’s efforts to free slaves from the southern United States with a medal and a letter of recognition. At the same time, Victoria did little to help the poor in her own country; 30,000 children lived in the streets of England. Relations with Ireland deteriorated sharply under her reign as she did, giving rise to such revolutionaries as Constance Markievicz, and abuses conducted by the British army in India caused the rebellion led by Lakshmibai, the Rani of Jhansi, though Victoria expressed horror at the events. She still had herself crowned empress of India despite any wretched feelings she might have had.

Still, Victoria had her fans; Empress Tz’u-hsi (Wu Chao,) the tyrannical ruler of China, adored Queen Victoria, even keeping a picture of the British monarch by her bed, and places in Texas, Antarctica, Africa and Canada were named in her honor.

It may come as a shock that a woman who so loved being in power would violently resent the idea of women gaining the right to vote. The idea of suffragism and equal rights for women was abhorrent to Victoria, and she made it known that anyone who supported it “ought to get a good whipping.” To Victoria’s chagrin, however, she became sort of a poster child for feminists around the world; having been widowed and still serving as queen, Victoria represented working mothers everywhere, and was proof that women could handle business and government as aptly as men.

In private, Victoria continued to be a contrast; one of her favorite pastimes was to have someone read poetry to her as she worked at a spinning wheel with a plate of cookies and a glass of whiskey beside her. She could laugh until tears ran from her eyes, but responded to a guest’s joke with a withering, “We are not amused.” And while new inventions were making life easier for millions of people, Victoria remained stubbornly old-fashion, preferring things like candles to electric lighting, and the unpleasant paper square to the new-fangled toilet paper.

Victoria continued to wheel and deal in her children’s lives as well. She continued to act coldly to her own daughters and sons, but lavished affection on all of her grandchildren, spoiling them with peppermints, private circuses at the palace, and personally sewing quilts for each one. She soon married her grandchildren and then her 37 great-grandchildren off to every royal family in Europe, a crafty political move that united all families by blood and prevented any wars, keeping her empire safe.

Always managing to conduct business despite her advancing age and failing health, Victoria kept working until just a few days before succumbing to a stroke at the age of 82 on January 22, 1901. Her son Edward VII inherited the throne and her grandson Wilhelm would become the last Kaiser of Germany. 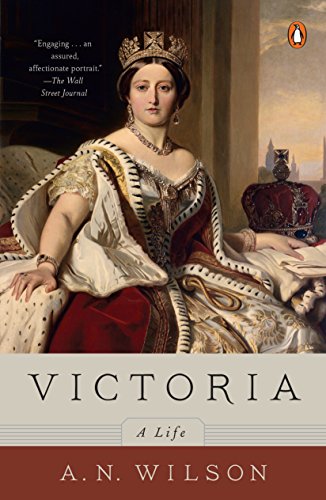