Essential Bushfire Safety Tips (Landlinks Press)
Bushfire tragedies need not happen. Homes need not be destroyed. Lives need not be endangered. Post-bushfire scientific research has found that 90% of homes can be saved from even the fiercest wildfires when defended by one or more people over the age of 10 who know what to do. In the widespread conflagrations we now experience, householders cannot expect a fire unit to be available on each doorstep. Bushfire safety is a personal responsibility. The purpose of Essential Bushfire Safety Tips is to enable and empower this process.
Buy Now

This aspect of the series will focus on fires. The improvement of fire prevention technology means that most fires occur in rural settings. In the United States and Canada the term 'wildfire' is used while in Australia and New Zealand the word is 'bushfire' for these devastating conflagrations.

View From the Kitchen Window

Community Bushfire Safety [OP]
Managing community safety requires a diversity of knowledge and an understanding of the many social processes that shape and ultimately determine a community’s resilience to bushfire. Community Bushfire Safety is accessible to practitioners, policy-makers, researchers and students. While the research reported has been undertaken in Australia, much of the material is generic and is likely to be relevant and useful to those dealing with community bushfire safety elsewhere in the world.
Buy Now

From 7 February to 14 March, 2009, 173 people died, and 414 were injured as 4,500 square kilometres of the State of Victoria in Australia burned.  Victoria, one of the smallest Australian States, is 237,629 square kilometres in size, about a third the size of Texas. As many as 400 fires occurred affecting 78 communities across Victoria. 7,562 people were displaced and over 11,000 livestock were consumed by the conflagrations.  Over 1 million animals altogether perished, with many also being injured (many kangaroos and koalas that survived were given veterinary care as a result of their burns). Over 3,500 structures were totally destroyed, 2,030 of these were homes. Many thousands of other buildings were damaged.

Black Saturday was the 8th deadliest fire in recorded history. Black Saturday is conservatively estimated to have cost around 4.4 billion dollars in damage, not including agricultural losses.

A week before the fires, an unprecedented heatwave hit Victoria. Record temperatures occurred (45.1 degrees Celsius/113.2 F on 30 January) during the heatwave. Conditions were remarkably dry as well as windy due to an approaching weather front. The fires started on a day when the highest temperatures since 1859 were recorded in Melbourne, the States capital. Victoria, like much of Australia at the time, had been in drought for an extended period. On the day before the fires the State Premier, John Brumby, issued a fire warning saying the following day would be the "worst day [of fire conditions] in the history of the state".

The next day saw winds of over 100 kilometres per hour coupled with extreme temperatures. Power-lines came down due to the winds. These extreme conditions meant that there was little firefighters could do to put out the fires. It is unknown what exactly started all of the fires, (lightening, felled power-lines or arson), but some of the fires were deliberately lit. A 39 year old man was arrested and charged with arson shortly after the fires.  His name was suppressed out of concern for his and his family's safety. He was not given bail and it was said that he was at risk from the other inmates in prison.

A temporary morgue was set up in Melbourne with the State Coroner issuing a press release that it may be impossible to properly identify all of the human remains.  A Royal Commission identified issues with building codes, fire policy and the locations of various townships.

Bushfires: Webster's Timeline History, 1822 - 2007
Webster's bibliographic and event-based timelines are comprehensive in scope, covering virtually all topics, geographic locations and people. They do so from a linguistic point of view, and in the case of this book, the focus is on "Bushfires," including when used in literature (e.g. all authors that might have Bushfires in their name). As such, this book represents the largest compilation of timeline events associated with Bushfires when it is used in proper noun form.
Buy Now

Devastating Fires in the 20th Century

There have been many other reported fires in the 20th Century which have resulted in tragedy and devastation.

With 1,200 people dead, the Kursha-2 Fire is the deadliest in the 20th Century and beyond. Kursha-2 was a small community built shortly after the Russian Revolution in 1917 as a logging town. Located in the middle of European Russia, it was completely destroyed in a firestorm on 3 August 1936.

At the beginning of the conflagration an empty train arrived at the Kursha-2 depot. It was proposed that the townspeople be evacuated but the depot master had it loaded with wood instead. All of the townspeople perished, except 20 who managed to hide from the fire in a pond, wells, a channel and on an un-forested hill. Ironically, the train was also burnt with no survivors, so perhaps the depot master saved the 20 survivors with his lack of generosity.

The town was re-settled after WWII but the railway line was ultimately dismantled and today no one lives there except one elderly woman. The only reminder of the fire is a common grave near the former railway depot. 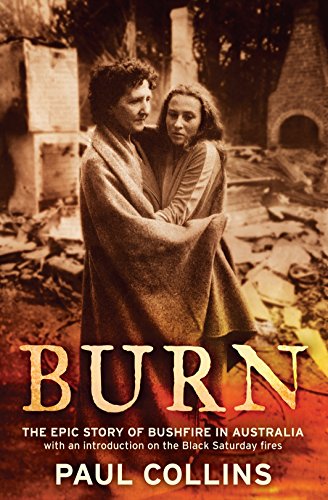 Burn: The Epic Story of Bushfire in Australia
Drawing on accounts of devastating conflagrations in Australia’s recent history, this grand narrative of cataclysmic fires chronicles legendary acts of heroism, stupidity, political incompetence, and environmental vandalism Down Under. The Black Thursday fire of 1851, which destroyed one quarter of Victoria; the Black Friday fires of 1939, which incinerated thousands of hectares in Victoria, New South Wales, South Australia, and Tasmania; the Canberra inferno of 2003; and Black Saturday of February 2009 are some of the epic stories of bushfire recounted in this vivid and provocative exploration of the most fire-prone land on Earth.
Buy Now

Are Fires Getting Worse?

Fires have occurred through history, and like earthquakes and floods it is really hard to support the proposition that they are getting worse in intensity or frequency due to climate change or any other factors. The consensus of researchers is that while many contributors to the warming trend over the last 50 years can be identified as the result of human behaviour, the dryness in Australia over the last 12 years (a major factor in fire severity) may be due to natural variability. It is unknown if greenhouse gas buildup has resulted in more severe fires. However, the vast increases in population and development mean that when a conflagration happens, the damage and the death toll are likely to be worse than in the past. We are aware of more fires today than we were in the past because the media is able to use technology to keep people well informed.