The White Rhino is in the Near Threatened status, according to the World Wildlife Fund, with about 99% of our 20,400+ individuals living in only four nations on earth: Kenya, Namibia, South Africa, and Zimbabwe. The State of Ohio helps make USA a fifth nation in which to find the white rhino.

A century ago, we had few white rhinos on the planet, but today, we have stopped many poachers and bred additional individuals across the planet in 60 zoos and wildlife refuges that are partners with the International Rhinoceros Foundation/IRF.

In Ohio, three zoos are partnered with IRF, including zoos in Cincinnati and Cleveland as well as The Columbus Zoo and Aquarium/The Wilds complex in the Central and Southeastern parts of the state. These three zoos lie roughly along the old 3-C Highway and Ohioans are still hoping for a new passenger rail system to connect them once again.

Our friends at the Detroit Zoo also partner with IRF, as does one zoo in Canada - The Toronto Zoo. Many US states are home to more than one zoo or park that is working with IRF and many are contributing to the ongoing survival of the last five species of rhinoceros left in the world.

Recognized in 2012 for predominating conservation activities by the AZA or Association of Zoos and Aquariums, The Wilds is a very important part of rhino conservation and preservation. Together, the Columbus Zoo and The Wilds fund 24 separate programs for preserving 1) global wildlife and 2) native prairie plants of North America, as well as community projects in Africa, including the arts.

The Columbus Zoo and Aquarium takes care of a group of black rhinos, while The Wilds to the east has a small herd of white rhinos, which are record breakers of a sort -- At least 16 rhinos were born there and still live there. Five generations of white rhinos have been born at The Wilds, with the first individual of the fourth generation, tracked worldwide, and born in Ohio in 2009, outside of their native Africa.

The latest new white rhino birth occurred on November 12, 2014, making the male infant the first of the fifth generation of white rhinos tracked at present. His mother is Anan, the Number One white rhino in the fourth generation. 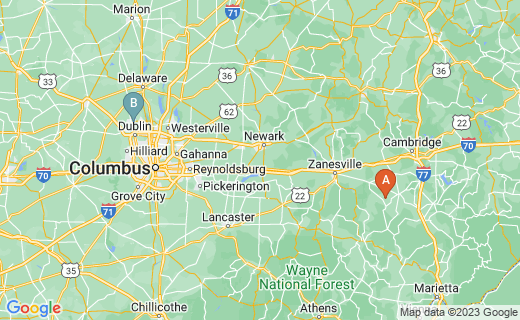 More About the Columbus Zoo and Aquarium

The park is a great place, partially because it has put to good use 10,000 acres of reclaimed surface mining land in southeastern Ohio. One of my great uncles was a coal miner there for many years and I think he would be pleased.

Education programs have been offered to the public ever since the beginning of the park. Today, children from lower-income counties in Southeastern Ohio are brought to the facility on scholarship funds as part of science learning in their schools and homeschool experiences.

The land was replanted with native flora and incorporated as a nonprofit entity in 1984 with the help of Jack Hanna and other wildlife activists. The land came from the Central Ohio Coal Company (Part of American Electric Power/AEP) and today, the visitor's center is heated with geothermal energy. AEP also donates the energy for the Columbus Zoo's Wildlights nighttime visitors' program from November through early January every year. Energy production of all kinds is increasing in Ohio. Continuing a theme of sustainability, The Wilds began a successful vegetable and herb garden in 2010.

Today, the park is a metropolis of animal care, but is not an amusement park. Everything here is for the animals and the visitors and students that want to see them. Of course, the 10 zip lines throughout the park may be looked on as an amusement ride, but riders surely see a lot of animals on the way across.

The first animals brought to The Wilds were a herd of Przewalski’s Wild Horses in 1992, followed by a Baringo giraffe breeding program. A 12-acre butterfly habitat opened to the public in 2004, the year that the first white rhinoceros was born at the facility.

The wild horses mentioned above were once declared extinct, but those born in captivity have been successful seeded back into Mongolia, China, and Kazakhstan, according to the National Zoo. Conservation efforts do work.

Przewalski’s Wild Horse in the State Emblem of Mongolia

Przewalski’s Wild Horse is simply "spirit" or wind horse in the Mongolian tongue. Never tamed for riding, it represents the spirit and independence of the people.

White Rhinos. These creatures are the largest of the rhinos and can stand as tall at 6 feet and weigh as much as 8,000 pounds (four tons), all the while looking vaguely prehistoric. As a child, I felt that they were descended from the Triceratops. I still wonder if the Triceratops, indigenous only to North America, was not a mammal instead of a great lizard.

White, black, and greater one-horned rhinos have been brought back from near extinction. Two more species also have hope: Javan and Sumatran, of which in 2014 there are about 50 and 100, respectively.

Both white and black rhinoceroses are gray in color. White, then, does not mean the color white in this animal case. Most published researchers feel that white or weit means "wide" in the Afrikaan spoken in South Africa and refers to the width of the jaw and lip.

The species is in a near-threatened status because of poachers who cut off the rhino horns for potions that can be sold at high dollar amounts to ineffectively treat anything from arthritis to warts. In a Chinese medicine shop in Manhattan in the late 1980s, I saw powdered white and black rhino horn sold as aphrodisiacs.

In Africa, one conservation effort is to cut off rhino horns above the lips so as not to cause bleeding, leaving the poachers with nothing to steal.

Poaching, the illegal hunt, involves cutting off the rhino horn close to the head and leaving the animal to bleed to death. If caught, yet failing to surrender, poachers die by rifle fire from rangers. We then have dead poachers, dead animals, and useless horns.

Some Additional Animals at The Wilds

Take A Vacation Safari without a Gun

The park is well known for breeding endangered and threatened animals to preserve the species. It is well known for its animal viewing tours as well, which can be enjoyed all through the year, even in winter. Overnight experiences are offered in warmer weather. Evening tours happen after a meal in the on-site cafe or restaurant.

The park even has two lodges, so tourists can feel they are on an old-time Hemingway safari - minus the guns.

Winter tours in enclosed vehicles are more expensive than spring or summer tours, but discounts and special packages are offered. In warmer weather May through October, a tour can be had at $20 - free to military personnel. Compare this to the $51USD cost to see the Australia Zoo and you can see the value in Ohio.

November 2014 -- The Dallas Texas Safari Club auctioned off a permit to hunt a Critically Endangered Black Rhinoceros in Africa for $350,000. The winner applied to the US Fish and Wildlife Service for another permit, this one to return to America with the dead animal as a trophy. He may not receive that permit.

Raising Funds for Rhino Conservation by Killing a Rhino

The Dallas Hunting Club in Texas auctioned off a permit in mid-2013 to hunt and kill one black rhino in Namibia, Africa. The black rhino is still a Critically Endangered animal and the auction money was given to a rhinoceros conservation fund. Some find this unacceptable.

Namibian national officials allow five black rhino hunting permits ever year, the money for them going to fund conservation programs. The policy seems counter intuitive, but perhaps it works if the rhino permits all bring in $200K - $300K each and he money is applied effectively.

The 2013 auction winner, who received death threats over winning the prize, is a big wig with The Hunting Consortium, which sells big game hunting tours in 54 counties for many thousands of dollars each.

I may be fine with hunting for food and clothing, but not with sport hunting, even if the kill is fast and clean. I object to throwing away the animal except for the skin and head. However, to their credit, some of the hunters on these vacation tours help bring in meat for starving villages. They are not required to do so.

In Ohio, extreme hunting is such a power-proving sport that if one cannot kill a deer or a turkey, one can rent a dead animal with which to take a photo for a holiday card announcing that he did, in fact, kill the animal. I'm glad that we cannot rent a dead rhino.