The peasant's revolt in England in 1381 was a rebellion of the common people against unfair taxes that were being levied on every person in the land. The poll tax was set at an identical sum, whether you were a serf or a Lord of the Manor.

The acknowledged leader of the revolt was Wat (Walter)Tyler. He was born on January 4th 1341, and died June 15th 1381. Little is known of his past until this time, except that he probably came from Essex but crossed into Kent to lead the Kentish men in the revolt. His second in command, John Ball, was a roving priest whose radical views on social equality had him thrown into prison on three occasions. He was born in 1338 and executed on 15th July 1381.

However doubt has been cast on the very existence of the third of the leaders of the peasants revolt, Jack Straw. Some chroniclers state that the name Jack Straw was a pseudonym used by Wat Tyler. Thomas Walsingham states that Straw was a priest and was the second-in-command of the rebels from Suffolk, although this story could be confused with a certain John Wrawe, a priest who was the vicar of Ringfield near Beccles in Suffolk, who was the leader of an uprising in that county. Although, according to information in the church of St Mary, Great Baddow, Essex, Jack Straw led an ill-fated crowd from the churchyard there to the revolt and he is referred to as the leader of the men from Essex. However, whether he was real or imagined, the records show that he was present at the uprising against the crippling taxes levied on the workers, or serfs as they were known. A particularly hated tax was the poll tax which taxed every individual.

A plague named the Black Death ravaged England in 1348 and 1349 and had greatly reduced the labour force. Consequently the surviving labourers could demand higher wages and fewer hours of work. The lords of the manors were desperate for people to farm their land and tend their animals. Then, in 1351, King Edward III summoned parliament to pass the The Statute of Labourers which attempted to curb the demands for better terms of employment by freezing wages to the level they were at before the plague. The introduction of this new law really angered the workers and formed another reason for the peasants revolt.

King Edward died in 1377 and was succeeded by his grandson Richard 2nd. Richard was only 14 years of age at the time and as he was a minor the country was ruled by the Dukes of Gloucester, Lancaster and York.

On 13th May 1381, Thomas Bampton, a tax gatherer tried to collect the taxes from a village called Fobbing in Essex, but he was sent packing having collected nothing. Robert Belknap, the Chief Justice of the Court of Common Pleas was sent to investigate and to punish offenders. He was attacked and the counties of Essex and Kent were in revolt. Kent marched on London behind Wat Tyler and John Ball. They were to meet up with the Essex men and Jack Straw in London. When the mob reached Blackheath, John Ball preached a sermon to them, the gist of which was, 'In the Garden of Eden, were there any class distinctions?'

The next day the rebels, encouraged by the sermon, crossed over London Bridge into the city.

The rebels then entered the Tower of London and captured the unpopular Archbishop of Canterbury, Simon Sudbury. They beheaded him and several of his followers. They also destroyed the Savoy Palace during the rioting and killed the king's uncle.

The men of Essex had gathered with Jack Straw, (or was it Jack Wrawe) and marched on London. King Richard finally agreed to meet the rebels and hear their demands, and a meeting was arranged for June 14th at Smithfield.

The meeting went ahead and Richard Wallingford presented the King with a series of demands, including the dismissal of some of his hated ministers and the abolition of serfdom.

The King's party took the demands away to study them and agreed to meet again on the following day.

At this meeting, Wat Tyler rode ahead to talk to the King and his party. It is alleged that Tyler became very belligerent, shouting his demands at the King. Tyler made the mistake of drawing his dagger whereupon the Lord Mayor of London drew his sword and stabbed Tyler, mortally wounding him. One of the King's knights, Sir Robert de Standish then drew his sword and ran it through Tyler's stomach, killing him instantly. The rebel army was in uproar, but King Richard, even though still a boy, rode towards them and shouted, 'You shall have no captain but me,' to defuse the situation. He made promises to the rebels that their demands would be met. They were to march to St.John's Fields where he would meet them. They agreed, but when they reached the rendezvous they found the King had broken his promise and an army of 7000 awaited them. The rebels dispersed but leaders were pursued, captured and executed, including John Ball and Jack Straw, who was beheaded. Following the collapse of the peasants revolt, the king's concessions were quickly revoked. 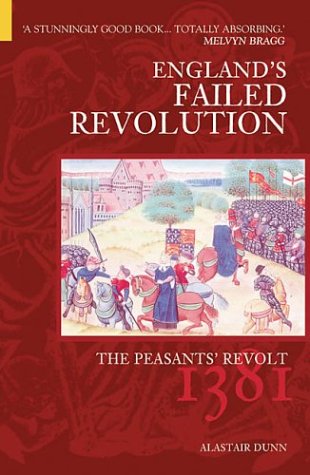