Karen gets fascinating WWI and WWII aviation stories from the Vintage Aero Flying Museum as writer for the Great War Stories Gift Shop.

Who Was Eddie Rickenbacker?

Eddie Rickenbacker is best known for being the top American ace pilot of World War 1. Though his score of 26 seems pathetic beside Red Baron Manfred von Richthofen’s 80, that’s what happens when you join the fight years after everyone else. But for the amount of time Rickenbacker actually spent in action, not even the Red Baron, nor any Allied or enemy pilot in World War 2, scored as high.

But before this pinnacle of fame in his life, Rickenbacker was a top race car driver, and before that a teenaged car salesman.

After that he was the president of Eastern Airlines, a major force in the way civilian and military air power were set up, and one of the voices warning the US of the buildup of German power before World War 2. During World War 2 he volunteered for various speaking and fact-finding tours in support of the war effort, including one to Russia. He had 14 brushes with death before he ever got to World War 1, and later survived two plane crashes, and 24 days at sea. He died in a hospital at the age of 82.

Rickenbacker’s autobiography is almost 500 pages, but is a good, and quick, read. It covers a lot of very exciting things, and his general attitude to life makes the everyday things sound interesting too. Also, he seems to have considered himself a plain man all his life, and his writing is very straightforward, with quiet humor. If I were allowed to post pure quotes of his stories, it would be much more interesting than my own writing. But since I can’t do that, I’m aiming for a series of articles to entice the reader to read something better - Rickenbacker’s own writings.

Before reading this, what did you know Eddie Rickenbacker as?

Rickenbacker – Early life as a Rickenbacher

Like many Americans at the time of World War 1, Eddie Rickenbacker was of German descent, though his family came to America by way of Switzerland. His name was originally Rickenbacher, and as a child he had the nickname “Kraut”. For obvious reasons, he changed the spelling during World War 1, but it is interesting to think that a couple generations before, the Richthofen and Rickenbacher families could have been fighting on the same side.

Eddie seems to have had a happy family life, as the third of eight children. His father made a great impression on him in his first 13 years, training him to work hard, work well and see the rewards of the work, so that even at the age of 8 or 9 he considered work before and after school to be a privilege rather than a punishment. Hard to imagine an attitude like that today? Just wait!

The four-room house in Ohio this family of 10 lived in had no electricity, running water, or heat other than from the kitchen stove, but it was great progress to a Swiss immigrant who came to the land of opportunity with no money and ended up foreman for a bridge-building company. Rickenbacker’s father seems to have been quite strict but also full of common sense. What some people today would consider child abuse, Eddie Rickenbacker considered lessons he badly needed as a rebellious young man. Looking back from the end of an eventful life, he saw that he had profited, both figuratively and literally, from what his father taught him.

Eddie’s father also showed his son the changes that were happening in the world, telling him at the turn of the century (to 1900!) there were going to be more and more of these new motorcars, and talking about how much it would shrink this great land of America to be able to travel across it that fast. Eddie’s father had also heard of the Wright brothers' activities, and was excited about the possibilities of a flying machine. Sadly, his father died within a year after the Wright brothers’ flight, when Eddie was 13.

To help support the family, Rickenbacker quit school (7th grade) and started work at 13. At that time it was illegal to hire anyone under 14 and who had not finished 8th grade, but as many of that generation and the next did, he lied about his age in order to take on responsibility, rather than escape from it.

At the age of 13 he also quit that first job in a glass factory, in order to (four hours later) find a job in a steel factory that allowed him to work during the daytime, and only 11 hours instead of 12, for $1 a day. He only stayed in this job for three months, because he found a cleaner, closer-to-home job capping bottles in a brewery, and a job setting up bowling pins that made him as much as 50 cents a night. He didn’t question his wages, assuming that his employers were paying him what he was worth. On the other hand, if he found better conditions or someone who thought he was worth more, he didn’t hesitate to quit. He quickly moved through a series of jobs working at a shoe factory, carving stone, cleaning railroad cars, and helping in an auto repair shop.

An accident that put him out of work for several weeks meant no pay for that time, but he found it valuable to have to stop, and think about the direction of his career. He decided he wanted to be in the automotive industry. He learned from experience (including some experiences he was not supposed to be having with customer’s cars!) about fixing an engine and electric batteries. He started wanting to build or even design cars. So he started an auto mechanics correspondence class, which he considered better than learning from a teacher, because he had to figure things out for himself - including learning how to study.

He wanted a job at the plant that was actually building cars, but was told they had no jobs for him. They changed their minds after he cleaned up the very dirty shop, to prove his ability to be useful.

These first couple years of a career helped develop the discipline, drive, and competitive spirit Rickenbacker already had, while other boys were sitting in school or playing. His interest in mechanical things, willingness to keep learning, and attitude of not being "too good for" any job were all helpful in becoming America’s top ace, but first these traits made him a winning race car driver.

What Race Cars Looked Like When Eddie Rickenbacker Was 13

Rickenbacker seems to have just been in the right place at the right time for a lot of opportunities, but it wasn’t all coincidence. He had already made a good impression on decision-makers in the company when he was invited to be a riding mechanic at the age of 15.

Winning races was very important to car companies in those days; not only did it show off the company’s product, but the races built up public interest and trust in this newfangled invention of motorcars. (Why it built trust is beyond my understanding, as I read about how many drivers died racing, but obviously it did – we’re driving the descendants of those cars today, though with a few added safety features!)

Rickenbacker experienced his first car accident when the brakes failed; there were no seatbelts in race cars then, so he was thrown clear of the car. When his boss lost a race they had worked very hard for, and quietly accepted it, he learned the lesson of manhood expressed in Kipling’s If poem, "If you can make one heap of all your winnings/ And risk it on one turn of pitch-and-toss,/ And lose, and start again at your beginnings/ And never breathe a word about your loss;"

It was a good attitude to develop for the risky business of being a fighter pilot.

Rickenbacker’s early life seems to be one story after another of success through hard work, cleverness, impressing the right people at the right time, and good salesmanship. Reading between the lines, at this point in his life, he wasn’t perfectly honest all the time. But he and his employers agreed on an honest day’s pay and an honest day’s work. Besides, he really was pretty smart, he could communicate well, and he had the aggressive attitude important in a fighter pilot, salesman, and many other careers.

This is the attitude of being very good at what you’re doing, but willing to bluff when you don’t know what you’re doing. It is not completely incompatible with humility, but fits in very well with arrogance, which is part of why fighter pilots have the reputation they do.

What is interesting about Rickenbacker is that he seems to have had a lot of humility. This may seem like an odd statement to the reader of his stories, but what he was really saying throughout his autobiography was, “I achieved great success, and this is how I did it, and with enough work, so could anyone else.”

My own opinion is the level of his success was due to his talents, but the fact of his success was due to his hard work. Not everyone has the same talents, and not everyone following his advice is going to be top in the world at anything. But even in America of a century later, anyone who works that hard in the job at hand, constantly educates himself on everything related to the job, and has Rickenbacker’s attitude about the worth of other people, is almost certainly going to get some recognition.

Part 2 of this series is Rickenbacker: Building Cars and Making Auto Racing History

Or if, like me, you prefer to use the library... 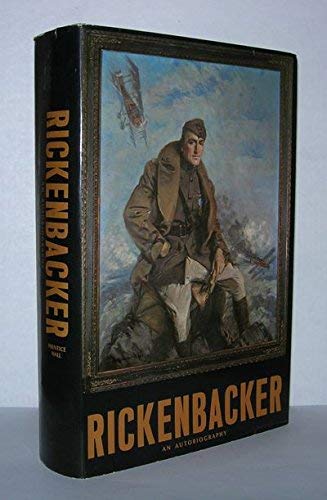