A New Park is Evolving

One of the most fascinating and horrifying histories of young America is now being shared with the nation. The bloodiest battle of the War of 1812 occurred where the River Raisin flows into the marshy shores of Lake Erie in Michigan. The lands acquired, then known as Frenchtown, became a designated National Battlefield Park on October 26, 2010.

Easy to get to off of Exit 15 on I-75 in Monroe, this National Park is a must to see and is near several hotels and many restaurants. It also links directly to Sterling State Park. Take Exit 15 off I-75 and head west, past the stoplight, to Detroit Avenue which is just past the Pilot Travel Center on the left and directly across from the Heck Park Vietnam Memorial Park entrance. There is no stoplight at Detroit Avenue. You'll drive about a mile to Elm Street (you'll pass the exit from the park on the right). Turn right on Elm Street and then a right into the Park.

A grassy field with a few trees stretches north from Elm Street along the River Raisin in Monroe, Michigan. An older building sits on the property and serves as the visitor center. Inside is a museum of information including dioramas and artifacts from the time period. It's a must see story that should be remembered!

The 200th anniversary of the Battles of the River Raisin was in January, 2013. Re-enactments, bands, trail walks, etc. are planned to commemorate this important part of U.S. history. Here's a link to the National Park System's brochure of events planned.

Park Hours -- No Charge to Enter

Life-size figures dressed in period clothing of the various peoples involved in the battles include soldiers for Great Britain and Canada, a Native American Indian, a Kentucky militiaman and a local Frenchtown settler.

Several dioramas show the battlegrounds of the War of 1812. Artifacts from the time period and a miniature hand-crafted diorama of the settlement scene also are very interesting. A highlight of the museum is a fiber optic wall-size depiction of the military movements. Visitors can try on some period clothing and touch a muskrat pelt. Behind the museum are paved trails with points of interest, such as a small cannon, in the park. Plan to spend an hour or two soaking up the history in the museum and on the grounds. 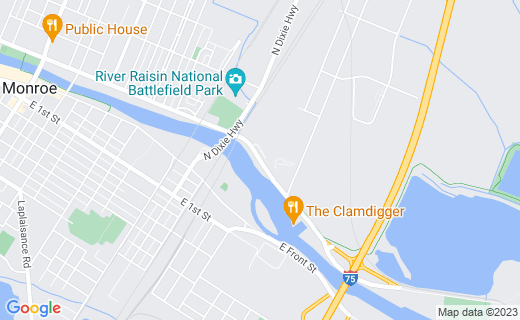 Other Things To Do Nearby Monroe, MI

Heck Park Vietnam Memorial is also off Exit 15 from I-75. It includes helicopters and other tributes to fallen service men and women from the Vietnam War.

General George Custer, Civil War hero who died at the Battle of the Little Big Horn, lived in Monroe with his wife Libby. A statue of him stands at Elm and Monroe Streets.

The Monroe Historical Museum is in the downtown area.

Monroe, Michigan, is a half hour or so drive from Ann Arbor, Toledo, and Detroit.

A nearby trail, called River Raisin Heritage Trail, connects to Sterling State Park. Over eight miles of paved trailways are used for biking and hiking. Sterling State Park has a nice campground, a beach on Lake Erie, and other waterways for boating, canoeing and fishing.

Lots of wildlife and great views are waiting along the trail, including blue heron, turles, catfish, deer and eagles.

From the 200th Anniversary

The War of 1812 was fought over the Northwest Territory, including the valuable Great Lakes, that Canada wanted to keep for Britain and the young United States wanted to lay claim to. During the war, the United States sent a general to build a road to Detroit to try to recapture the area from the British. He ended up surrendering and giving up Michigan, including the settlement of Frenchtown, in August of 1812.

In January of 1813, the British forces and the United States forces clashed again. The first battle was won by the United States. The victory was short-lived as reinforcements took the settlement by surprise on January 22. The U.S. forces surrendered, even though the Kentuckians wanted to fight on to the death, and the British promised them protection. The British took those who could walk to Fort Malden as prisoners. The severely wounded were left behind to wait for sleds to return for them. What happened to those left behind became the rally cry for our young nation.

Some Indians came back to the settlement the next morning for revenge. On a cold January 23, 2013, they murdered many of the wounded and took some as prisoners. Then the Indians burned down the house that the remaining injured were in. Those who could escape the flames were tomahawked as they crawled out the door. The Indians made their prisoners walk to Fort Malden and those who weren't strong enough to walk were left to die along the way.

This sad ending became known as the River Raisin Massacre. The Americans who fought the British and Indian allies in remaining battles of the War of 1812 often rallied to the cry, "Remember the Raisin!" 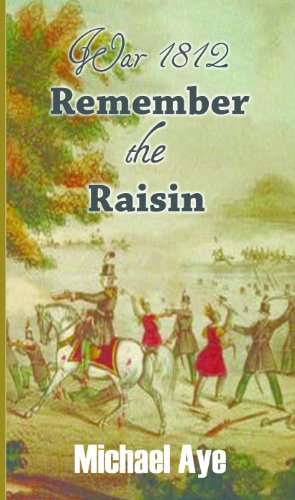