Spiders and their sticky webs

How many people do not bother cobwes in their homes or barns? Spider webs are everywhere, and if they are not here at the moment, they will certainly return soon. A British researcher has ever calculated that agricultural land per hectare houses more than a million spiders and all insects in Britain annually eaten by spiders together weigh more than all the inhabitants of the island together. For all these insects to catch the spiders need a cobweb. The spiders in webs are usually female. Males do not build webs as adults, the females, however, need the proteins from insects to produce eggs.

The origin of the spiderweb

About 400 million years ago, spiders used mainly used their thread to weave a shelter. At some point, the spider had to go to higher grounds because insects (their prey) developed wings. Tarantulas, and some other species still use their silk to build a shelter, but about a third of the 35,000 known species of spiders weave webs.

How is a spiderweb made?

A spider has six spinnerets with which she spins a thread. If the wire is long enough, the spiders cuts the thread with a hind leg. First the spider spins a framework of wires that are not sticky, these are the long wires from the center of the web to the outside, also similar to the spokes of a bicycle. After that the well known spiral is formed, which are sticky. How is it that a spider doesn't stick to its own web? That's because spiders have a layer of oil on their paws so they do not stick to their own web and they avoid the sticky part of their web and remain on the framework. 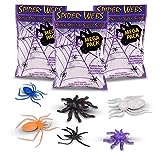 How is an insect caught?

Spiders eat about 15% of their body weight on insects per day. How do they catch insects exactly? There are quite a lot of insects trapped in spider webs, but it is estimated that 80% of the insects escape from webs. If an insect is, the spider goes to it and injects a paralyzing poison. After that insect is wrapped in silk, another than that used for cobwebs. Then the spider sucks the insect blank if he has time.

There may also be toxic insects in the web of the spider. Those can be avoided by the spider, but can also be cut loose, after which the web needs to be restored. If unfortunately for the spider a bird flies through the web or a man is running through it, the spider can start building all over again.

There is much more to tell about spiders and cobwebs. The important thing is that most people find spiders scary animals, but they do not realize that spiders have to work very hard to stay alive.

Hence spiders are wonderful animals that are able to build the most beautiful webs, they eliminate many annoying insects and are not just scary!

For any Dutch readers, read more about spiders here.