Thunderstorms - Why They Develop More in the Summer

In the summer the air temperature heats up, driving many people to local lakes, rivers, pools and beaches to cool off.  After a fun day of water play, those people warily watch clouds build in the distance, then listen as thunder appears to come closer and closer bringing dark skies and lightning flashes with it.  The afternoon thunderstorm has arrived.  People pack quickly and hurry for their cars, fleeing the coming rain.  Nearly every summer day in some parts of the world, the summer thunderstorm makes an appearance.  Why are there more thunderstorms in the summer?

A thunderstorm is also called a thunderhead, electrical storm, thundershower, and lightning storm.  According to the National Oceanic and Atmospheric Administration (NOAA), there are approximately 1,800 thunderstorms happening at any one time; that’s about 16-million thunderstorms each year. Most thunderstorms last around 30 minutes.  But in that short time they can produce three deadly natural forces – lightning, tornadoes and flash floods. In order to understand why thunderstorms happen more in the summer, we have to understand how they are formed and what makes them tick.

Thunderstorms need certain conditions to thrive.  The summer presents the most ideal opportunities for those conditions to come together.  In order to develop a thunderstorm needs two things:

A thunderstorm is nothing more than clouds developed from the rapid upward movement of warm, moist air.  With moisture and warmth the two most important part of a thunderstorm’s development, it makes sense that they would form more often in the spring and summer, especially in humid areas like the southeastern United States.

When a thunderstorm develops, the warm air carrying moisture close to the ground rises through the cooler air above and gradually cools.  This cooling of the air causes the moisture in it to condense into water droplets and let off latent heat which warms the moist air again, making it less dense than the surrounding dry air.  This causes a cycle of the warm air continuing to rise in an updraft and form a cumulonimbus cloud, a thunderstorm cloud.

At a certain point in the updraft, the warm air meets more warm air and cannot rise any further.  At this point it spreads out in the common anvil shape of a thunderhead.  The water droplets continue to condense forming larger water droplets and eventually becoming ice particles.  When the ice particles are heavy enough, they fall through the cloud and melt to become rain.  Ice particles that are too large to melt in the downdraft fall to Earth as hail.

In a well-developed and large thunderstorm, the updrafts and downdrafts create enough turbulence that lightning, strong winds and even tornadoes are created.  Thunder, of course, comes with lightning.

Thunderstorms form more often in the summer and in warmer regions because the ground is heated and releases warm air.  Regions of high humidity already have a lot of moisture in the air so when the ground releases warmth it creates the ideal beginning for a thunderstorm – warm, moist air. 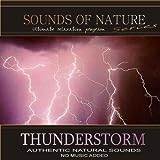