Mt Teide in Tenerife is the highest mountain in the Canary Islands and mainland Spain and the unique habitat it provides at elevations of 2,000 -3,600 metres has made it the home of some very rare wild flowers. One of these is the Teide Violet (Viola cheiranthifolia) and it is a plant that only grows in this location.

There are several other very rare species found in this highland environment of great interest to botanists. All the plants are adapted to withstand drought and extremes in temperature ranging from the heat of summer down to sub-zero in the winter months. The sunlight is very powerful at these heights too.

The Teide Violet, or Violeta del Teide as it is known in Spanish, is only found growing high on Mt Teide and also in very small populations on Pico Viejo and Montaña Blanca which are Teide's neighbours. It is the only plant found at such a high altitude in Spain. It was first described by botanist Alexander de Humboldt.

It is actually in the Violaceae or pansy family and looks like a tiny pansy or a violet like its name suggests. Its flowers are a violet-purple with yellow and white in the centres and they are only produced for a short time in spring.

The Teide Violet is a small perennial that grows amongst the volcanic rubble and rocks of the higher parts of these mountains. It has oval-shaped leaves that are hairy and resemble those of the Wallflower (Cheiranthus), and hence its botanical name.

Because it is such an exceedingly rare plant it has been included in a conservation programme since 1991 along with a number of other protected species.

The red-flowered Viper's Bugloss produces flower spikes that can be as much as three metres in height and that arise from a large basal rosette of leaves in late spring and early summer. They produce plenty of nectar and attract bees and butterflies.

This species grows on the rocky slopes and scrub-land around the Visitor's Centre and Hotel and up by the Teleférico (Cable-car) base. It is also found at somewhat lower levels around the village of Vilaflor, which at 1,160 metres is the highest mountain village in the Canary Islands. A sub-species with red flowers too and named E. trichosiphon is again very rare but found in some parts of the highlands of La Palma.

Because of its attractiveness the Red Viper's Bugloss is also marketed and sold as seeds throughout the island and from suppliers on the Internet. It is deliberately cultivated in gardens by the tourist centres on Mt Teide and, not surprisingly, is the subject of many paintings and photos of the Tenerife highland landscapes.

The smaller blue-flowered Dwarf Teide Bugloss grows in the pumice-covered parts of Las Cañadas del Teide and in the areas of the Montaña Blanca, Los Azulejos and Montaña de las Arenas Negras.

There are many other species of Viper's Bugloss found in Tenerife and the other Canary Islands but the two found on Mt Teide are protected under regional legislation.

Mount Teide has its own unique and endemic species of Catnip or Catmint that is known in Spanish as Hierba del Teide or Gatera del Teide. There are two varieties with the normal violet-flowered species Nepeta. teydea var. teydea, also found in La Palma at altitudes of 1,800-2,000 metres, and a white-bloomed variety, known as N. albiflora that is only found on Tenerife.

The plant is a woody perennial herb that can reach over a metre in height but is often a lot shorter. Its flowers are carried in spikes. It grows in the rocky scrub-land and was once used as a traditional medicinal herb by the people of the island. Nowadays it is protected under regional legislation (Annexe II of the Flora Order).

Another species of endemic plant found on Mt Teide is the Teide White Broom (Spartocytisus supranubius). It is a woody perennial bush that grows into quite large clumps that reach some three metres in height and is a dominant shrub in the highland scrub.

It flowers from May to July with masses of white and highly-perfumed blooms that scent the air up on Mt Teide and are sought after by the bees that come from hives specially kept on the mountain because of the excellent source of honey from the wild flowers.

The Teide Wallflower (Erysimum scoparium) forms bushy clumps of leaves and gives rise to pretty violet-coloured flowers in spring, and that bear a resemblance to the true Wallflower it is named after.

Canary Island Wall Lettuce (Tolpis webbii) is another plant found on Mt Teide. It has yellow flowers that are a bit like small Dandelions and it is found in the "malpais" (badland) areas of rugged rocky ground and pumice. It is another perennial shrub and has a woody stem.

The Shrubby Scabious (Pterocephalus lasiospermus) grows in clumps in the scrub-land. It has pinkish flowers and is a commonly seen plant up on Mt Teide.

There is also the white-flowered Teide Daisy (Argyranthemum teneriffae) that again forms shrubby clumps and is a plant often to be found in many parts of the Mt Teide highlands. Its flowers look like daisies and have yellow centres that contrast with the white petals that surround them.

Whilst all these plants are adapted to extreme conditions including drought, it is worrying at time of writing to consider how they will survive the winter drought the island is currently experiencing. Lack of rainfall in the late autumn and December and January has brought no snow to Mt Teide this season. The plants are all usually rejuvenated by the heavy showers and melting snow and will be suffering from an extreme shortage of water.

It is to he hoped that enough will fall in February and March to make up for the loss so far. Many of the species of flora found on Mt Teide are already in very limited populations and really do not need any further threats to their survival. 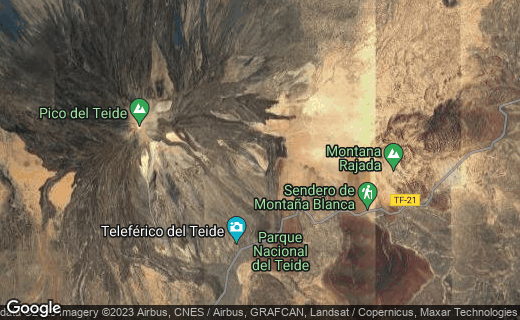