During World War II, Germany practiced discrimination against and genocide of Jews in all the European territories it controlled. The killing was accomplished on a small scale by its military and secret police, but occurred most efficiently and systematically at "concentration camps." These were compounds for holding political prisoners (which all Jews were), working the able-bodied until they became worn out and useless, but quickly killing all the young, old, ill, and unfit. In order to prevent world outrage and possible additional alliances for its enemies, Germany endeavored to keep these mass murders secret. This led to the perverse development of a "kinder, gentler" showcase camp. 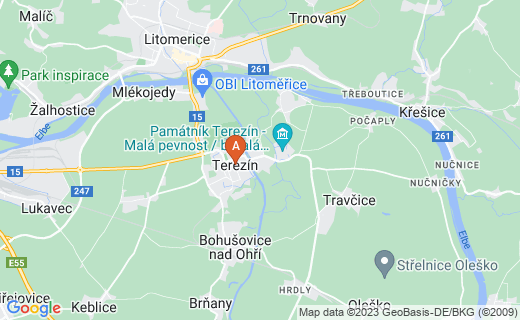 The site of the hideous Nazi appropriation of a fortress in the Czech Republic.

The city of Terezin, north of Prague, served as the location for the simulated happy camp. Hitler transported Jews from Czech lands and eight other countries to this city-fortress. In hopes of staving off objections from the rest of the world, prominent Jewish musicians, writers, visual artists, leaders and rabbis were kept there, at least temporarily. Probably, the entire Jewish membership of the Berlin Symphony was sequestered at Terezin.

The purpose for creating the Terezin Camp was to gather an impressive collection of Jewish achievers and have them create a mythical environment to be shown, if needed, to humanitarian inspectors or observers, such as the International Red Cross. The effort even had a title: "Verschoenerungsaktion" meaning "beautification." However, all musical offerings, paintings, and products were carefully controlled by the Nazis.

“The Red Cross was allowed to visit Terezin once. The village of Terezin was spruced up for the occasion. Certain inmates were dressed up and told to stand at strategic places along the specially designated route through Terezin. Shop windows along that carefully guarded path were filled with goods for the day. One young mother remembers seeing the bakery window and shelves suddenly filled with baked goods the inmates had never seen during their time at Terezin. Even the candy shop window overflowed with bon bons creating a fantastic illusion she would never forget.

“When the Red Cross representative appeared before this young mother, she remembers being asked how it was to live in Terezin during those days. Her reply implored the questioner to look around. Be sure and look around, as she herself rolled her own widely opened eyes around in an exaggerated manner. The Red Cross reported dryly that while war time conditions made all life difficult, life at Terezin was acceptable given all of the pressures. The Red Cross concluded that the Jews were being treated all right.”

Stories so that we may never forget

Above is the description of the farcical, mythical dream refuge Terezin.

Concentration Camp Terezin was undoubtedly better than every other Nazi camp. Nonetheless, in holding over 55,000 prisoners in an ill-equipped area, the inmates experienced rampant starvation and disease. Thousands died of malnutrition and exposure. Also, “selection” to be transported to Auschwitz-Birkenau or Treblinka death camps occurred weekly. Thus, one’s life could go from horrific to absolute hell.

The Terezin Concentration Camp facilities included a star-shaped thick-walled prison. Jewish artists were sent to it after having been caught stealing paper and other supplies with which they produced writings that recorded daily life in Terezin. Musicians created a censored operetta reflecting Herr Hitler’s empire and saved it. Artists and camp school teachers also stole materials so the children could surreptitiously create their works of art. Six thousand drawings, diaries, and games were hidden and later successfully retrieved.

Following is a partial list of what has been saved:

Some of the works of art are accompanied by touching narrations by the survivors.

...It acts as a bridge connecting the victims, survivors and future generations and houses a unique collection of art work created in the ghetto, where cultural activity was the key to keeping one's dignity in spite of the inhuman conditions...

So far, humans have not abandoned the illogical crime of genocide. The ills of the world are many. However, by remembering a story vowing to prevent its repetition, one works towards a higher good.