Terrorism Rocks America: The Story of the Palmer Raids

Bombs were sent through the mail, striking fear in the hearts of hundreds of thousands. A series of terrorist attacks targeted prominent places of business and power. Thousands of foreigners were rounded up, interrogated, imprisoned and deported for no other reason than they were different. A man stepped up to the plate and took control of the situation, becoming a hero in the process. If all this sounds familiar and reminds you of the terrorism that plagued the United States in the 1990s and of 9/11, think again.

In the wake of World War I, the United States was a jittery place to live, The death toll of the war had shocked many Americans, causing a good number of them to long for the days of isolationism. Inflation and unemployment were high, and many looked for something or someone to blame, causing a wave of racial tensions and labor unrest. A new threat was looming on the horizon, a dangerous idealism spreading from Eastern Europe: communism.

Communists under Lenin had taken over Russia, and the idea was that the very nature of communism would destroy the foundations of democracy in America. Because communism had its roots in socialism, the two suddenly became one in the minds of most Americans. Socialism had been an idea in the United States since the days of Karl Marx, but after the recent waves of racial tensions and civil unrest, suddenly it had become the ideals of an unseen enemy. And soon, with a wave of anarchist attacks, the public would want faces to go on this unseen enemy, and would need someone to put a face on it.

In February of 1919, anarchists tried to blow up a textile mill in Massachusetts. They were killed in the explosion. In April, a mysterious suspect mailed over thirty bombs to business leaders and governmental officials. Most were held up at New York postal centers for having insufficient postage, but two got through. One went to Seattle Mayor Ole Hanson, who immediately called the police to dismantle the suspicious package. The second went to the Atlanta house of United States Senator Thomas Hardwick, where it detonated as the maid opened the package, causing her to lose both of her hands.

A month later, anarchists managed to detonate eight bombs nearly simultaneously at various points in the United States. The intended victims of these bombings were either politicians who had called for deportation and anti-sedition laws or judges who had sentenced anarchists to prison. One such target was the attorney general of President Woodrow Wilson's Cabinet. He was coming home from a party and had just said good night to the young Assistant Secretary of the Navy who had given him a ride home. He offered the young man a drink, but was graciously rebuffed. The attorney general spent a few moments in his library before heading upstairs to bed. As he was preparing to retire for the night, a bomb exploded just outside his house, destroying a wall and shattering windows. The nearby houses were also damaged, and the mangled remains of the bomber were strewn for blocks, giving the police the idea that the bomb had detonated prematurely.

Had the young assistant secretary came in for the offered drink, both men would be dead in the library. The young man was Franklin Delano Roosevelt. The attorney general was A. Mitchell Palmer.

Alexander Mitchell Palmer was a Democratic Quaker from Pennsylvania. Born May 4,1872 in Moosehead, Pennsylvania, he was an alumni of Swarthmore College in Pennsylvania. He was admitted to the bar and practiced law until he was elected to Congress in 1909. He unsuccessfully ran for Senate in 1914, stepped out of any public seat in 1915, but accepted the position of Alien Property Officer by President Wilson in 1917. By 1919, he was awarded a position in Wilson's cabinet as the Attorney General. The bombing on his own home propelled him into the spotlight as the hero that America needed to find the scapegoat they wanted to blame.

Palmer became convinced that radical “Bolsheviks” were to blame for the string of anarchist attacks. Using the fear of the “Red Scare”, Palmer formed the General Intelligence Division, a new division in the Bureau of Investigation in August of 1919. He placed a young man by the name of J. Edgar Hoover in charge of the new division. This would later become the Federal Bureau of Investigation, and J. Edgar Hoover would become one of the most powerful men in the United States.

So we should just forget about the First Amendment?

Using the Espinonage Act of 1917 and the Sedition Act of 1918, Palmer and Hoover began their raids on Communists, Socialists, Activists, Unionists, Free Thinkers, Social Workers, anyone who was rumored to be a Bolshevik by a distrusting neighbor or coworker. By December of 1919, several hundred people had been rounded up. On December 21, well known anarchists Emma Goldman and Alexander Berkman were deported to Russia aboard a ship. Among them were over 240 other alleged anarchists. More were held for months with no charges.

By early 1920, several thousand people had been rounded up. Houses were searched illegally, newspapers shut down and people were imprisoned, often without charges. Many of those incarcerated were aliens of Italian, Jewish or Eastern European descent, who were regarded by the “old stock” Americans with little or no rights. Others were people who said anything unpatriotic or who spoke up against the raids themselves. Palmer became a hero to the hysteric masses, a man touted by President Wilson himself as one who would make a great President.

However, by the middle of the year, Palmer's rhetoric was losing steam. Secretary of Labor Louis Freeland Post had dismissed over 2000 warrants, citing them as illegal. A supposed May Day revolution by anarchists that Palmer had been claiming would happen, failed to materialize, leaving many embarrassed. The ACLU released a statement citing the illegal entrapments and detentions and unlawful arrests as lack of due process and rights given by the Bill of Rights. Another blow was dealt with Massachusetts District Court Judge issued a ruling denouncing the actions of the Justice Department.

Even though anarchy would continue to threaten the nation intermittently for another 12 years, Palmer's credibility was shot. Once thought of as the leading candidate for President, he failed to even garner enough votes for his party's nomination. He would later go on to help Franklin D. Roosevelt with his campaign, and would die in 1936 from complications following an appendectomy.

History does indeed repeat itself.

Just as echoes of the Salem Witch Hunts of 1692 would become evident in the Red Scare Hysteria of 1919-1920, Palmer's rhetoric and illegal raid techniques would be used at least three more times in American history. If memory served him right, perhaps Franklin Delano Roosevelt would not have incarcerated the Japanese during World War II. If Joseph McCarthy could have learned a lesson from Palmer, perhaps he would not have blindly accused many of being Communist and striking fear into the hearts of many. If present generations had studied the Palmer raids and found that America was based on the Bill of Rights instead of on mass hysteria, perhaps another attorney General, John Ashcroft would not have quickly detained so many “aliens” of another culture.

Davis, Kenneth C. Don't Know Much About History: Everything You Need to Know About American History But Never Learned. Perennial: New York, 2003.

Felkins, S. Leon. “We've Been Through This Movie Before: The 82nd Anniversary of the Palmer Raids.” Lewrockwell.com: Anti-State, Anti-War, Pro-Market. 2001. 1 October 2011 from http://www.lewrockwell.com/orig/felkins10.html

Weinstein, Allen and David Rubin. The Story of America: Freedom and Crisis from Settlement to Superpower. DK Publishing: London, 2002. 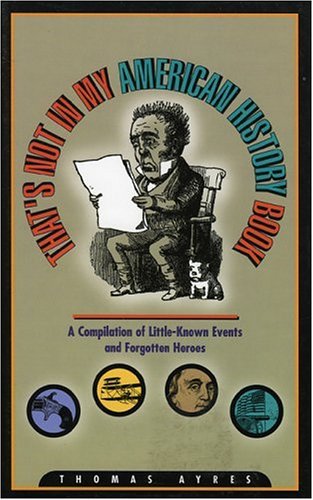 That's Not in My American History Book: A Compilation of Little-Known Events and Forgotten Heroes
Buy Now