There are about 2500 species of milkweed in the world, over 100 of which are native to North America. One of the most familiar North American milkweeds is the Common Milkweed (Asclepias syriaca). Though Common Milkweed is often treated as a noxious weed by farmers and gardeners, it is a true case of one man's trash being another man's treasure.

Interest in milkweeds, especially Common Milkweed and its relative, Showy Milkweed (Asclepias speciosa), is growing as the plant's many uses become more widely known and studied.

Host Plant for the Monarch Butterfly

The milkweed is most famous as the host plant for the Monarch Butterfly. The Monarch is the national insect of the United States and one of the most beautiful and beloved butterflies in the world.

The monarch is one of relatively few butterflies that migrate. Every year, monarchs travel more than 2,000 miles from their summer homes in the United States and Canada to their overwinter grounds in the rainforests of Mexico. Unfortunately, thanks to habitat loss in both regions, Monarch populations are in decline.

As a result, many families, schools, businesses, organizations, and other groups have started to create butterfly gardens to help protect habitat for the butterflies. Milkweed is not only the sole host plant of Monarch caterpillars, it is also a favorite nectar source for the adult butterflies.

The toxic leaves of the milkweed not only provide food for monarch caterpillars, they also provide protection. Because of their poisonous diet, Monarch caterpillars and butterflies are also poisonous and distasteful to birds and other predators. They advertise their unpleasant flavor with the brilliant orange color that makes them the most widely recognized of all butterflies.

Monarchs are not the only creature that likes milkweed nectar. Among the others known to be frequent visitors to milkweed plants include swallowtails, painted ladies, American ladies, red admirals, fritillaries, hairstreaks, hummingbirds, and several moths.

Milkweed flowers are also a popular source of nectar for many species of bees. Over 30% of human food crops are entirely or primarily dependent on bees for pollination, yet bee populations are also in decline around the world. To learn more about how you can give these vitally important pollinators a helping hand, please read Plant a Bee Garden. 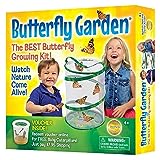 Like dandelions, maple trees, and many other plants, milkweeds rely on the wind to distribute its seeds. Each seed pod contains hundreds of small, light seeds attached to feathery floss.

This floss has been collected and used for centuries by humans thanks to its softness and warmth.

American Indian tribes used milkweed floss to line the beds of their infants, as well as blankets and clothing for adults.

During the 19th century, there was a thriving milkweed industry in Massachusetts, which used milkweed floss primarily to stuff mattresses.

In World War Two, the Japanese cut off America's supply of kapok, a natural fiber used to stuff life jackets for sailors. Milkweed floss proved to be a perfect alternative. Milkweed floss is 6-8 times more buoyant than cork. A single pound can keep a 100-150 pound man afloat for hours. The United States government enlisted schoolchildren across the nation to collect milkweed pods as part of the war effort. By the end of the war, it is estimated that they had gathered 11 million pounds.

In addition to life vests, the floss was also used for bomber jackets, because it provided a lightweight yet warm lining for the jackets, and could double as a life vest in case of a water landing.

Following the end of the war, interest in milkweed floss died off, but in recent years there has been a revival thanks to the discovery that milkweed floss, when mixed with goose down, traps and suppresses dust and dander than can cause allergic reactions in some people. Down comforters containing a mix of goose down and milkweed floss are now commonly sold as a hypoallergenic alternative to pure down comforters. "Hypodown," as it is sometimes called, is also used to stuff pillows, jackets, and other products. Studies have shown that milkweed floss is actually 20% warmer by weight than goose down; however, it has lower lift and as a result is likely to continue being used more in combination with down than as a solo product for use in bedding.

Milkweed floss is not the only useful part of the milkweed pod. The seeds, it turns off, contain an oil that has natural sunscreen properties! The oils, when stabilized, also show signs of good potential as a moisturizer, but research into the cosmetic uses of milkweeds is still in the early stages.

Other Uses of Milkweed

Milkweed as an Alternative Crop

There is a small, yet growing, milkweed industry, based primarily in Ogallala, Nebraska, where the hypodown company Natural Fibers Corporation, is located.

Curiously, though relatively easy to grow in gardens or as part of prairie restoration projects, this aggressive, even invasive, plant does not perform well under modern agricultural cultivation techniques, where it falls prey to disease.  However, the growing demand for hypodown combined with promising research into other uses for the plant provide motivation to study and improve cultivation techniques for the plant.

Interest in milkweed as an alternative crop is also growing because it is dependent upon insects for pollination, promising increased farm habitat for threatened insects such as monarch butterflies and honeybees, as well as other wildlife.

As a long-live perennial with a deep taproot, milkweed can also reduce erosion thanks to its own soil-holding capabilities and the reduced need for cultivation. Though asingle planting of milkweed can provide 10-20 years of productive harvest, the plants do take longer to mature than annual crops such as corn, typically 2-3 years from planting to first significant harvest.

Learn More About the Milkweed Industry