Missouri saw many battles during the Civil War being only third behind Virginia and Tennessee. The Battle of Pilot Knob (Fort Davidson) was the beginning of Confederate General Sterling Price's final raid to secure Missouri for the Confederacy in 1864. It also marked the beginning of the end of his raid and would be a harbinger of what was to come for the rest of his campaign.

Gen. Edmund Kirby Smith, commander of the Trans-Mississippi Army hastily put together a final raid into Missouri to be commanded by former Missouri Governor and Confederate Major General Sterling Price. Price's objective was to seize St. Louis, capture the armory, enlist southern sympathizers and then to march on to Jefferson City, seize the capital and install Thomas Reynolds as governor and thereby claim the state for the Confederacy.

However, Price had a ragamuffin band of men to support Him. Of his 12,000 strong army, 3,000 were deserters captured at gunpoint along the way, and most of his men had no supplies or even shoes. When he arrived in Missouri many of his troops didn't even have weapons.

Union General Rosecrans fortified St Louis and sent General Thomas Ewing Jr, infamous for his General Order No. 11 in the west, who was in command of the district of St Louis down with a detachment of the 14th Iowa to Ft Davidson in Pilot Knob to ascertain the overall composition of Price's army. One of Price's division commanders, Joseph O. Shelby felt any action against the tiny fort was pointless and that they should move directly on St. Louis. However, the other two division commanders, James Fagan and John S. Marmaduke, felt leaving an armed garrison in the rear was a mistake. Price agreed with Fagan and Marmaduke and they made plans to seize the tiny fort.

On the afternoon of September 26, 1864, a Union scouting party ran into an advance group of Fagans Confederates near Shut-Ins gap. The Rebels pushed the Union soldiers back to Ironton and heavy fighting broke out. The Union soldiers pushed on their own and forced the Rebels back to the gap. Nightfall and a heavy rain ended the fighting for the day.

At dawn fighting again broke out and the Union soldiers were pushed back to Ironton and then further repelled back to the fort in Pilot Knob. Confederate soldiers swarmed into the open valley while Union forces tried to hold them back from the spurs of the two mountains and with artillery fire from the fort.

The fort lay in between two mountains, Pilot Knob to the east and Shepherd Mountain to the west leaving a wide open valley in between which they would have to cross. Price, under the recommendation of one of his colonels decided on a frontal assault rather than securing the two mountains with large artillery. This would be a deadly mistake.

As the rebels closed in on the fort, Union Major James Wilson and his troops were cut-off on the spur of Pilot Knob and captured. Wilson and five of his men would be marched to Union and eventually exectuted by the Confederates. The rest of the Union soldiers now had no choice but to retreat to the confines of the fort. Price sent a messenger to Gen Ewing demanding his surrender which Ewing curtly refused.

Around 2:00PM The rebels then advanced across the field and suffered heavy losses under a barrage of Union artillery and musket fire and then fell back. The smoke became so thick that Union soldiers could only see the legs and feet of the oncoming Rebels. The Rebels then made a second charge coming withing 30 feet of the fort only to again be repelled by heavy fire from the fort. The Confederate's then made a third and final advance on the fort, this time making it into the moat surrounding the fort and began to scale the walls. However, Union soldiers fused artillery shells as grenades and began tossing them over the side, blowing up bodies as high as the fort walls. The rebels retreated and the battle ended around 5:00PM. However, the loss of life for the Confederates was major, well over 1,000 rebels lost their lives.

Ewing convened a council of war in his tent that evening and realized that in the morning Price would place his large artillery on both peaks and the fort would be overrun. He planned a daring midnight escape through the rebel lines and made his way west towards Rolla, leaving a small detachment to blow up the powder magazine in the fort. In the morning when the rebels awoke they found the fort empty. Price was livid and sent Shelby and Marmaduke after Ewing. Skirmishes were fought along the way, but Ewing finally made it to Rolla.

The victory for the Confederates came with a very high price in lives. Price knew advancing to St Louis now was futile, and he had wasted manpower and resources chasing Ewing. Price would make his way across the state, ultimately ending in final defeat at Westport. However, the battle at Ft Davidson by a small number of Union soldiers against a much larger Confederate force, earned it the title of the "Thermopylae of the West". 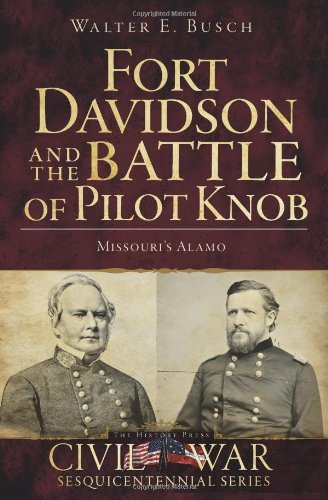