No Getting Past This Lady

Early in human history, it was common to find women fighting in armed combat. Over time, attitudes shifted, and women were relegated to the home and hearth, never to pick up a weapon in defense of their home. This was something William Montagu, the 1st Earl of Salisbury, England, was likely counting on when he marched his troops up to the gates of Dunbar Castle in Scotland.

Was he ever wrong.

In the early 1300s, Scotland was in open rebellion against their English lords, led by figures such as William Wallace, Robert the Bruce, and David II, king of the Scots. The earl of Salisbury, considered a military genius by many at the time, was dispatched with his troops to take Castle Dunbar, a strategic stronghold in Scotland. At the time, Patrick Dunbar, the Earl of March, was away fighting, leaving his castle in the hands of his second wife, Agnes, the niece of Robert the Bruce and commonly called “Black Agnes” for her dark hair and eyes. She was just a woman—how much trouble could she be?

Upon reaching Dunbar Castle, Lord Salisbury called upon Lady Agnes and ordered her to surrender the castle to him or face a crippling siege. To Salisbury’s utter disbelief, Agnes haughtily responded that the castle was not hers to give away—it belonged to her husband, not her, so she couldn’t give it up. Incensed, Salisbury began a siege of the castle, expecting it to fall within days.

Castle Dunbar was massive, so Salisbury arrived with both catapults and brand new cannons to batter down the stone walls. When it was clear that Agnes was serious about not surrendering the castle, Salisbury bombarded it with boulders and cannon shot … only stand there and watch in shock as Agnes and her maids emerged to calmly dust the parapets with their handkerchiefs and shake out the rugs at the conclusion of every single attack.

Insulted, Salisbury decided that catapults and cannons just weren’t working, and he ordered the construction of a testudo, or “tortoise,” a large battering ram enclosed within a movable shed that would shield soldiers from arrows. After observing the tortoise—or as she mockingly called it, the “sow”—pounding away at her front gates, Agnes ordered her men to roll one the boulders that had been launched at her castle onto the battering ram, smashing it to kindling. She then ordered her men to rain fire down upon the machine, and laughed as Salisbury’s stunned men fled, “like piglets.”

Furious that his own boulders had been turned against him, Salisbury frantically searched for a new way to get into the castle, eventually bribing one of Agnes’s guards to sneak him and his men in. The guard agreed, but Salisbury failed to really think this plan through; the guard did indeed let Salisbury and his men in, but not before alerting Agnes and her own soldiers. A trap was waiting when they arrived, and Salisbury escaped by the skin of his teeth.

Now on his last frayed nerve, Salisbury tried for a different tactic. Dragging Agnes’s brother, the earl of Moray, out of prison, Salisbury stood the man with a noose around his neck before the castle and shouted to Agnes that if she didn’t surrender now, he would kill her brother. From her lofty place on the parapets, Agnes laughed scornfully, daring Salisbury to do it; if he killed her brother, she said, then she would inherit his land, soldiers, and power, and become even stronger than she was already. Realizing that she was right, an embarrassed Salisbury returned her brother, unharmed, to prison.

At last, realizing that there was just no sense in continuing the siege, Salisbury gave up on June 10, 1338, riding away from Castle Dunbar in utter defeat. His soldiers, dispirited at having been outwitted, outmaneuvered and outfought by a woman, memorialized Black Agnes in a famous rhyme:

“She kept a stir in tower and trench,
That brawling, boisterous Scottish wench,
Came I early, came I late,
I found Agnes at the gate.”

The Mammoth Book of Heroic and Outrageous Women, edited by Gemma Alexander

Books You Should Be Reading: Women's History 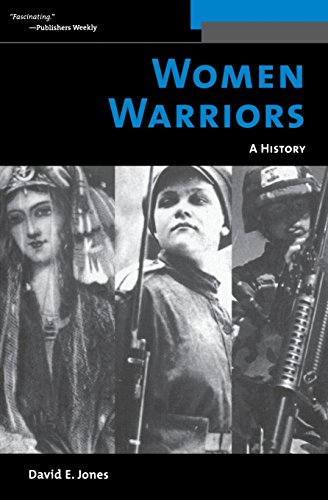