The Moral Education Of A Child

Traits are aspects of organisms that are hardwired from our DNA, such as blue eyes and blond hair, but characteristics of our personalities are meant to be molded and shaped, ideally by two parents. While there are many single parents doing a fantastic job of raising their young, I still believe that children need more than one point of view. It is a simple way of having a "checks an balances" system, so to speak. In all manner of ideas, two heads, assuming that they are responsible, are often better than one. Moral education of children is extremely important, perhaps more than the tradition education.

It is a fact that all children need basic education, however, they also need to learn social behaviors that will inform their adult characters. From the second that they are born, children are watching us. We teach them to smile, laugh, frown and cry. Later we teach them to ride a bike and tie their shoes. Perhaps unknown to us, we are also teaching them how to interact with other members of society. My father used to say, “Do as I say, not as I do!”. I am sure you can guess how that turned out. It is impossible for a child to disregard the behavior of their parents, as these are the first people that children emulate, even very young ones. While my father meant well, it was not the best parenting strategy. I believe that raising a child is both the most difficult and the most rewarding job that one could have. I have seen, from my parent’s generation to my own, a large increase in paternal involvement in a child’s life. I have also seen in the younger generation a more cavalier attitude toward parenting, although there are no absolutes.

One of my children's favorite shows as a toddler was "Barney And Friends". Each time the show ended, he would call the whole family together to sing the ending song with him. We were required to hold hands in a circle while we sang. Over and over again, we sang that song, mainly because it was important to my son. Barney is still watched by millions of children.

Reality is not so cut and dried, however, making your children feel important and paying attention to what they feel and think will go a long way in raising a confident and empathic adult. 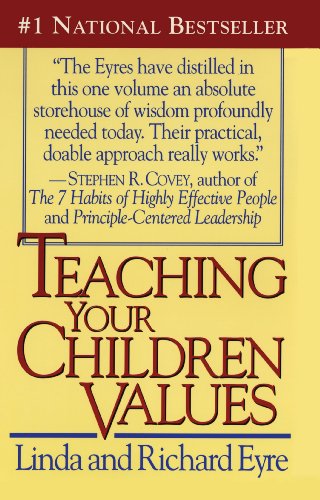 It is important to teach children by example in thought, word, and deed. That is not to say you must be perfect, otherwise, how would they learn it is normal to make mistakes? Children are not born malicious, but neither are they born altruistic and benevolent. They are born selfish creatures with no impulse control and they believe, literally, that the world revolves around them. At the beginning, that belief is necessary for survival, but if it becomes a permanent aspect of their personality, we are left with an adult that is selfish and self centered with poor impulse control. Most of us know one or two of them. I believe the most important characteristic that a child can be taught is empathy for all other creatures. Empathy is the ability to imagine yourself in another person's circumstances and to feel what the other person may feel. Empathy is not sympathy, it is more important. You can build all other characteristics around that one. An empathetic adult usually won’t lie, steal, or cheat because he will feel remorse. He won’t intentionally harm others unless in self defense, and he will take responsibility for his actions. Imagine how the world would be if just that changed, if everyone took responsibility for their actions. Unfortunately, we can only do our best and try to teach our children right and wrong and hope it is not too late.
“Bring up a child in the way that he should go, and when he is old, he will not depart from it”
Paraphrased from the Bible.