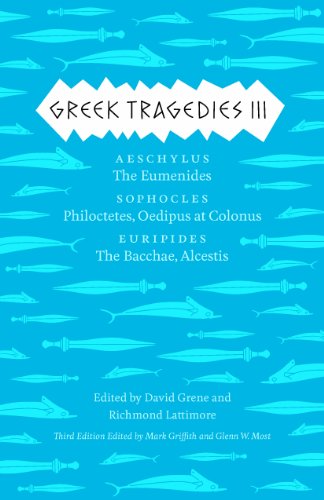 When it comes to Greek tragedy, there really are only three main men, Sophocles, Euripides and Aeschylus. This hub will tell us all we need to know about these three truly talented men.

Aeschylus (525/524 BCE - 456 BCE) tends to be seen as the father of tragedy, being the first of the three writers to come about he set the scene of tragedy.

Some of Aeschylus's famous plays that are still surviving today include;
The Persians - This is one of the earliest plays to survive, performed in 472 BCE and based on the experiences of Aeschylus's life, especially in the Battle of Salamis. This play focuses on the theme of Hubris, by blaming Persia's loss on the pride of its King.
Seven Against Thebes - This play was performed in 467 BCE and seems to have the theme of the Gods interfering within humans affairs. The play surrounds Oedipus's shamed sons, Eteocles and Polynices, who agree to take turns in ruling the throne, but after the first year, Eteocles refuses to step down, so Polynices declares war for the throne. The brothers kill each other in combat.
The Oresteia - This triology of plays consist of Agamemnon, The Libation Bearers and The Eumenides. These plays tell the tragic and bloody story of Agamemnon's family after his return from the Trojan War.

There are over 50 other plays that Aeschylus wrote, unfortunetly, there are lost plays;
Myrmidons, Nereids, Phrygians or Hector's Ransom and Niobe.

Sophocles (497/496 BCE - 406/405 BCE) is another one of the three great tragedy writers, who's plays came a little later then Aeschylus's. Sophocles competed in about 30 competitions, winning around 24, but never becoming lower then second place, sometimes Sophocles was beaten by Aeschylus, whereas Euripides only won 4 competitions.

Throughout Sophocles's life he wrote 123 plays, but only 7 have survived.
Sophocles famous triology of plays was called The Theban Plays, consisting of Antigone, Oedipus the King and Oedipus at Colonus. The triology concerns the fate of Thebes at the time of Oedipus.
Other then The Theban Plays, the other 4 plays consist of;
Ajax - This play focuses on the life of the Trojan hero Telamonian Ajax, who was unfortunetly driven to suicide.
The Women of Trachis - The name of the play is based on the Trachinian women who made up the chorus, although the play is about Deianeira's accidental killing of Heracles after his completion of his famous twelve labours.
Electra - This is the play about Agamemnon's children, Electra and Orestes avenging their fathers murder by Clytemnestra and Aegisthus.
Philoctetes - This retells the story of Philoctetes, an archer who was abandoned on Lemnos by the Greek fleet on the way to the Trojan war, and how he refuses to help the Greek fleet after they realise they cannot win the Trojan war without his archery skills.

Euripides (480 BCE - 406 BCE) was the youngest great Greek tragedy writer out of Aeschylus and Sophocles. It is claimed that Euripides had wrote about 92 plays throughout his career, although out of these 18 or 19 have survived.

Even though Euripides wrote approximately 92 plays, there are 2 famous ones.
The Bacchea - The play is based on the punishment of King Pentheus, King of Thebes, and his mother, Agauë, for refusing to worship the god, Dionysus. Dionysus's mother, Semele, was the sister of Aguaë. Semele was inpregnated by Zeus, but she was killed by her own family for having an affair with a God, so Zeus took Dionysus out of Semele's womb and sew him into his own thigh until Dionysus was ready to be born.
Medea - Produced in 431 BCE, the play is about the downfall of Medea and Jasons relationship. Jason leaves Medea for Glauce, the daughter of the King of Corinth, Creon. After Medea finds out, she makes a poisonous robe for Glauce, who dies after putting it on. Medea also kills hers and Jasons children, so Jason has no chance of a family. Medea then escapes to Athens after showing Jason the childrens bodies and leaving him in despair

I hope you have enjoyed reading my hub on the three great Greek tragedy writers and it has answered any questions you had about them. If you haven't already read any of their plays, I definitely recommend you do. Although, I'd start of with Euripides plays as they're a bit easier to read, and then progress onto Sophocles and Aeschylus's work. If you enjoyed reading, please check out my other hub about Greek Philosophy.