What was the Guinea Pig Club?

It was a very exclusive club indeed. The club was started in the Second World War and membership was extremely limited. It was limited to airmen who had been badly burned and who had been under the care of the astonishing surgeon, Archibald McIndoe.

Does that sound as though I’m going to tell a story that’s rather gloomy? It isn’t. This is a wonderful uplifting story about young men who were taught to live again and to be proud of their damaged faces and limbs. It’s a story of unknown experimental surgery and pioneers of revolutionary procedures that are helping people today.

Although airplanes had been used to a limited extent in the First World War, it was in the following war that horrendous injuries were seen in airmen. The fuels used caused flash fires. This meant that the faces and fingers were the most vulnerable areas of the airmen’s bodies. They literally (sorry about this) had their faces burned away.

McIndoe was determined to help.

Until McIndoe, hardly any thought was given to the psychological problems scarred people would face when they were able to resume their daily lives. There was no rehabilitation or counselling. Archibald McIndoe was to change all that.

We sometimes forget that these were very young men. Many were teenagers when they were injured. And few were hardened soldiers - the young men were plumbers, architects, students, postmen - just ordinary lads who were doing their bit for their country.

Many had received very little training, if any. For airmen, the training concentrated on the actual flying, navigation or bomb preparations. McIndoe referred to them as ‘my boys’.

Archibald McInroe’s hospital was at East Grinstead. What was revolutionary for the time was his attitude towards his patients. In fact, that’s the wrong word because he and his staff didn’t treat the injured airmen as patients, except when they were undergoing reconstructive surgery.

He encouraged them to lead a life that was normal as possible. His men were encouraged to wear normal clothing or their air force uniforms rather than hospital gowns or pajamas. Crates of beer were regularly delivered,there were get-togethers and concerts and it’s even said that McIndoe chose particularly pretty nurses to help keep up the men's morale. Normal rules that were in place at the time banned relationships between nursing staff and patients but again, McIndoe relaxed this rule. There were several marriages as a result.

This included the town of East Grinstead. The airmen were encouraged to leave the hospital to go to the pub or the cinema in the town. Rather than hide their injuries, which were very disfiguring, he strongly suggested that his men be proud of their disfigurement. After all, it was a badge of honour.

The people of the town embraced his theory and invited the airmen into their homes for dinner, local girls dated them and the disfigured men were able to realise that they still had lives.

The town was so successful that it became know as:

Meanwhile McIndoe pioneered reconstructive plastic surgery - something that was virtually unknown in those days. Because of this he was largely in the dark - there were no medical books or experiences to guide him.

Thus his men became known as the Guinea Pig Club.

They took this seriously. By the time the war ended in 1945 there were six hundred and forty five members and they continued to meet and have annual reunions until quite recently. Bear in mind that an airman who was twenty one at the start of the war would be approaching one hundred years old today.

Today, the work pioneered by Archibald McIndoe is helping soldiers who have returned from war zones and anyone who has suffered severe burns. It is no exaggeration to say that many people would have died without the knowledge and expertise that he left as his enduring legacy.

Scroll down to read just three stories about patients.

Amanda is a well known and respected British actress. When she was a baby,she was severely burned in a kitchen accident.

Children are particularly susceptible to burns because of their delicate skin.

She says that she was pronounced dead, her burns were so severe, but it was the McIndoe Foundation that saved her life.

She is patron of the foundation and a few years ago, unveiled a statue of the surgeon to commemorate his work.

Peter was a successful racing driver in the 1950s and 60s.

He had an accident on the racetrack which left him severely burned.

Thanks to the work of McIndoe, he survived.

Despite his scarred and reconstructed face, he appeared in full page magazine adverts to promote the use of fireproof race wear.

Yes, he received a fee for this - which he donated to the McIndoe Foundation.

Charles was World War Two flight lieutenant, a navigator.When he was twenty years old, he was badly burned when he crashed a motorbike during the war. He was treated by Archibald McIndoe and a member of the Guinea Pig Club.

He never forgot that Archibald McIndoe had given him over sixty years of life. Charles died in 2010 and left £50,000 to the foundation.

In the first video here, you’ll see Amanda Redman talking about her injuries and the treatment she received. She explains why she supports the foundation.She is shown at approximately the three minute mark and at about five minutes.

Do watch the entire video though,if you have the time. It shows injuries that are not a pretty sight but as the Guinea Pig who is being interviewed says ‘we're still here’. They were taught not to be ashamed of their faces and we should be able to watch so that we can see what they went through.

The video on the right shows Peter Blond.

The Blond family have supported and helped fund the McIndoe work and Peter continues to do so to thisday.

Peter himself is a motorsport man and in this short video, he talks about Peter Procter, the injured racing driver you saw above.

See Peter Blond once again. This time he is talking about Archibald McIndoe and his sense of humour. How, for example, he appointed an airman in a wheelchair to be the treasurer of the Guinea Pig Club.Why? So that the chap ‘wouldn't be able to run away with the money’.

“It’s one thing to die for your country, but it’s a great deal more important to live for it.”

Simon Weston has been voted as Britain’s most heroic figure. During the Falklands War in 1982, he was badly burned and lucky to survive.

Simon was not treated for his burns at East Grinstead - other hospitals had excellent facilities all those years after McIndoe’s pioneering work, but he attributes his rehabilitation to the support he received from the Guinea Pig Club members.

He has since become a valued patron of the foundation.See him on this video.

The Blond McIndoe Foundation continues to help and research. However, it relies on donations.

You can donate here. 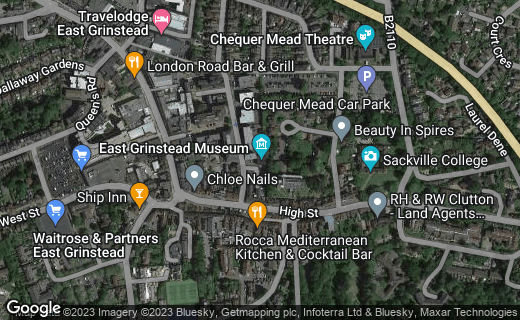 Today, the museum at East Grinstead features many items from the hospital and the club.

You can visit at:

Meet some of the Guinea Club members 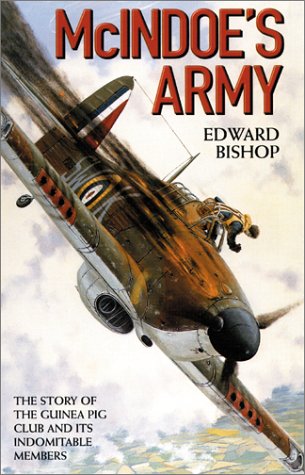 MCINDOES ARMY: The Story of the Guinea Pig Club and its Indomitable Members
Buy Now