The History Of Knighthood

The History Of Knighthood

Knighthood in Europe was characterized by feudalism as well as the service of a mounted combatant. Knights belonging to the medieval era were required to protect the helpless, weak, defenseless, and to fight to protect the welfare of all. Although these were the primary duties involved in knighthood, they were extremely hard to fully accomplish. Even the best knights had a difficult time achieving all of these goals.

Knights were well trained in fighting, hunting and riding as well as being equipped with the knowledge of how to be courteous and honorable which were vitally important traits of a knight to portray. A knight's lifestyle and decisions were lead by chivalry, including areas of military, religion and their social life.

The military aspect of chivalry was of the utmost importance in knighthood along with all of the fighting elements of war as there were a great deal of customs and rules for a knight to follow. Horses and weapons were the most important things for a knight and often he would own several horses for distinct purposes.

Knights Of The Guild

One of the most exquisite signs of chivalry was the flying of the vibrant colored banners that not only displayed power but also distinguished the knight in battle. Warriors were expected to always act with military courtesy, even to their enemies. When knights and nobles were taken as a prisoner during combat, their lives were often spared and they were held for a ransom while staying in fairly comfortable surroundings.

During the medieval era, becoming a knight was not a very attainable position. Sons that were born to current knights were eligible for knighthood and while other young men could become a knight, for anyone of a lower class, the job was very much impossible.

The Steps To Knighthood

At a young age these future warriors were sent to castles as pages which were young servants or attendants to a knight. For seven years the boy would be a page, cleaning, serving and learning basic combat techniques. The lord that he worked for would often start training him in combat as young as seven years old. At age 14, he could graduate and become a squire.

A squire was the next stage of knighthood. As a squire, the teenage boy would carry the flag of his master with him to battle. If he proved loyal in battle, he would be dubbed and become a knight. Other duties of the squire would include rescuing the knight if he became imprisoned and taking care of any prisoners his master took in. He would also ensure an honorable burial if the knight that he served was killed. Squires dressed the knights in their armor, replaced the knight's sword if it was dropped and took care of the horses. During the Middle Ages, the squire became recognized by himself or the work he did and it was no longer always assumed that a squire would automatically become a knight.

When the squire was 20 years old, a ceremony called a dubbing would take place for him to become a knight. Even though through many years of hard work and devotion, they had more than proved their eligibility over and over again, their status in society would be controlled permanently. They had no choice but to obey the rules of chivalry at all times and with no exceptions. The chivalry code continued influencing social behavior even long after knighthood ceased.

Emergence Of The Knights

A knight was a professional soldier. The 8th century of mounted men in stirrups made soldiers more powerful and essentially turned cavalry into the most crucial element of medieval armies. Being a mounted soldier however was very expensive because it required more than enough income to buy and take care of a horse, along with purchasing all of their armor and weapons as well. Therefore, those that could never afford knighthood became peasants.

When a feudal society emerged in the 10th century, most people held land that belonged to someone else for services of some kind. Any men who were not free were required to provide some of their crops as well as labor services. Any men who were free either provided military personally or, if they were rich, provided military. A man who held an estate to a lord, served as a knight and at times the lord would call upon his knights for military services.

Knights were not necessarily considered nobility and nobles were not necessarily knights. The noble and the knight class emerged strongly in the 12th century. Nobles became knights more and more frequently. In the end of the 13th century, the Parliament in Paris made a decision that forbade the court from making any non-free men into knights unless permission was granted from the king. This marked a closure of knighthood. 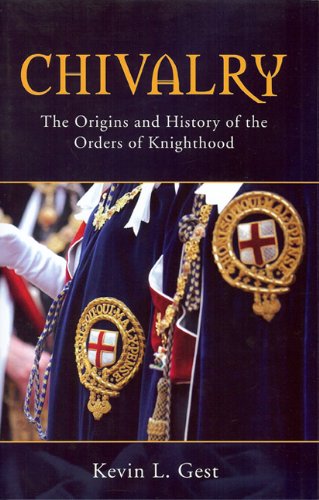 Chivalry: The Origins and History of the Orders of Knighthood
Buy Now