The Language of North East England

The Language of North East England

Most people when asked about what is spoken in the North East of England will usually say Geordie and although that is true in part it is acctually only one of many similar yet different dialects that are used north of the Yorkshire border.

This will be an ongoing work with regular updates. I'd love to here from readers especially if they have any words to add or interesting stories based around the NE dialect. Has it ever got you into trouble?

Inspiration for this article

Spoken by the people of Newcastle

Spoken by the people of Sunderland

Spoken by the Durham Mining Community

So lets take the word Something and look at it across the North East.

Due to these pronunciation differences across the NE it is at times hard even for a Pit Yacker to understand a Geordie. Especially one with a full on broad Geordie accent. This is something most outsiders do not realize and it is that lack of knowledge that is one of the reasons why most of the NE people get classed as Geordie.

Great reading if you are interested in the NE Dialects 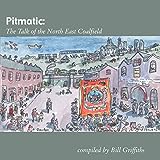 The above book is one of two must have books on North East Dialect the other is not showing up on the Amazon site.

It is A Dictionary of North East Dialect by Bill Griffiths.

True Story of my Dad

My dad was born and bread in a NE Pit Village and so was 100% Pit Yacker. In his late teens/ early 20s he moved about 20 miles south to the Durham-Yorkshire Border. Although he taught me Pitmatic his accent and grasp of the dialect faded over time and there were points where he did not understand some of his own family.

I can remember him comming home one day after getting lost in the Byker area of Newcastle. He told me how he had stopped to ask for directions and could not understand the Geordie who tried to help. It was at this point that I learned that although the dialects are similar they are not the same and I became more interested in learning the differences and how to understand each version of the NE dialect.