The City of Las Vegas within the US state of Nevada is famous for its casinos and luxury hotels. Built in the scorching and arid deserts of Nevada. Las Vegas has become one of the United States most globally recognised cities. Each year over forty million tourists visit Las Vegas, many of them come to try and beat the house. Although some people do win big, others are obviously less fortunate. Lady Luck is not just the preserve of those millions of gamblers who visit the city. Lady Luck was also called upon by the thousands who chased the mother load in the gold rush of 1908. The scars of the mad scramble for gold can still be seen today in modern day Las Vegas and I shall share with you five of this thriving tourist destination's secrets.

Between 1951 and 1963, Las Vegas and its numerous guests were given a great view of the atomic weapons being tested just under seventy miles away at the Nevada Testing Site. Mushroom clouds could be seen from the City of Sin and more importantly, both the visitors and the residents of Las Vegas were exposed to the fallout from these numerous nuclear devices.

It was only after the signing of the Test Ban Treaty, that nuclear tests were to be tested underground, this change helped to keep exposure to radioactive fallout to a minimum. It is hard to believe that the citizens in that time frame were so close to such explosions and endangered in such a careless fashion.

Las Vegas, the City of Sin

Las Vegas owes its growth and popularity to the events of 1931. It was in this year that gambling was legalized. This action combined with the loosening of divorce and marriage laws in the state, helped create an environmental which would not be replicated in other states.

Around the same time, the construction of the Hoover Dam brought a large amount of tradesman and workers to the local area. The public works at the time guaranteed a wage in a time of a great financial depression. These workers with money to spend created an economic stimulus. Numerous other lines of work saw an additional bump in demand, from entertainment jobs through to the construction of additional residences.

3/ It has Been Known to Snow in the Desert.

Despite Las Vegas being surrounded by arid landscape, snowfall has been recorded in the winter months. The surrounding mountain ranges often see snow but Las Vegas sees very little snowfall due to the level of sunlight it receives and unfavourable conditions for it. Most winters see on average of about an inch of snow but in 1908, one foot of snow fell on the embryonic City of Sin.

The winter months are usually the wetter months but it does not rain much upon the bright lights of Las Vegas. And out of a full year, the night time temperature will only drop below zero for less that a dozen times out of the year.

The arrangement between the two industries are beneficial as together they drive other business ventures into Las Vegas and the economy of the state. 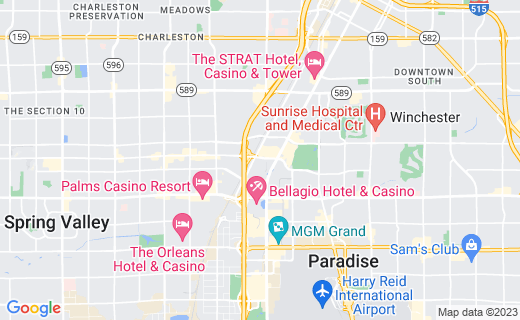 The Vegas Strip gets its name from the home town of retired police officer Guy McAfee. He renamed the Los Angeles/ Arrow Head highway after Sunset Strip in West Holywood, California.

The Las Vegas Strip is just over four miles in length yet is populated with numerous hotels, casinos, golf courses and restaurants. Many of the major tourist attractions are not technically on the strip and have spilled over into Las Vegas boulevard.

Due to the spiralling cost of land, many of the golf courses are seen as a luxury as they could house more valuable entertainment centres such as casinos and hotels. Many of them are under threat and in the future they may be closed and given over to alternative uses.