The Moose of Algonquin Park

The Mighty Moose of Algonquin

Algonquin Provincial Park, located in Ontario is home to over 3000 moose. The moose (scientific name: Alces alces) is the second largest mammal found in Ontario (only polar bears are bigger!) and can be found all over North America. There are an estimated one million moose living throughout North America.

If you're looking to learn the best time of year for moose sightings in Algonquin Park, or simply want to learn a little bit more about these massive animals, you've come to the right place. This is the final piece in a three part series which focuses on the three biggest mammals found in Algonquin Provincial Park.

So let's get started and learn about the mighty moose!

All About Moose Antlers

After they reach past their first year of age, male moose will begin to develop their first set of antlers. The rack of antlers on a fully developed male moose can reach an impressive six feet across in length!

So why do moose have antlers anyway?

Well, for no real good reason.. Other than winning the affections of female moose. Rather, for intimidating other male moose during their mating season (which is called the rut and happens in late autumn)

After the mating season is over, the male moose will lose his antlers (typically between November and December).Their antlers can weigh upwards of 90 pounds, so they loose them before the winter comes, in order to conserve their energy during the coldest months of the year.

This is why the"horns" of a moose are called "antlers" and not "horns" . Horns do not fall off. An animal that has horns will have them for life, they do not shed them they way moose do.

In early spring they will begin to grow a new set of antlers. They grow out from the skull and they're initially covered with a brown tissue called "velvet". During the summer months the velvet will begin to fall off. Moose will often rub their antlers against trees and rocks to help remove the velvet. This is why sometimes when you look at a photograph of a moose, their antlers look "fuzzy" and sometimes they look smooth.

They will begin growing new antlers in late spring and take between three to five months to become fully developed. The antlers of a moose are the fastest growing bones on earth. 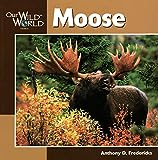 If your child is interested in learning more about moose, or you're a teacher looking to teach your class about wildlife. The book "Moose (Our Wild World") is an excellent source of information for elementary school children.

The above video is from my personal library. It was taken during a trip to Algonquin Park in early summer 2012. It perfectly illustrates an Algonquin Park Moose Jam. As you can see, there were several cars parked along the highway to watch the moose. The moose was a female.

If you've ever visited Algonquin Park in Ontario, chances are, you've spotted at least one moose during your trip. With a population of over 3000 moose living within the boundaries of the park, your chances of finding yourself a part of an Algonquin Park Moose Jam are relatively high. Algonquin Provincial Park is one of the best places to view moose in Ontario. The best time of year to experience a moose sighting in Algonquin Park is earlier in the camping season (May and June).

So what exactly is an Algonquin Park Moose Jam? It is a very common and exciting experience to be part of! In Algonquin Park, it is customary to pull over to the side of the road when you spot a moose grazing in a field or ditch along the highway 60 that runs through Algonquin Park. I have been part of Moose Jams that saw dozens of cars lined up along the road, their owners excitedly hopping out of their cars with cameras in hand to stand and enjoy watching the moose in Algonquin Park.

What Is A Moose Jam?

"Moose Jam" is a term you'll hear very often during a visit to Algonquin Park. Similar to a traffic jam, it refers to a line up of cars parked bumper to bumper along the highway. Except in this case, the cars are parked so drivers can get out of their cars and watch a moose they've spotted! (See video above for footage of an Algonquin Park Moose Jam)

Have you ever participated in a Moose Jam?

During your stay in Algonquin Park, please keep these important safety tips in mind when participating in a Moose Jam: 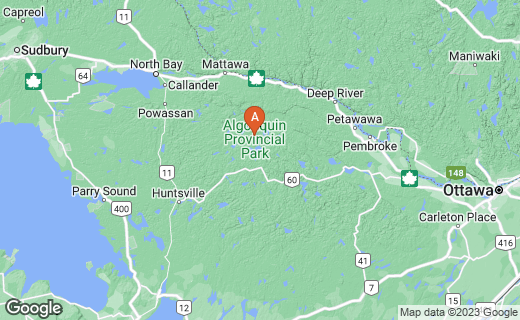 Algonquin Provincial Park is home to over 3000 moose.

If you'd like more information about booking a trip to Algonquin Provincial Park, The Friends of Algonquin Park Web-Site is chalked full of all the details you'll need to plan a trip to the park.

If you'd like to learn more about moose, you can visit The Science Behind Algonquin's Animals for more moose facts, including details about moose research in Algonquin.

If you have any questions about Algonquin Park or it's moose, comments or you'd like to share your own moose jam stories, please leave them in the comments section below!

JessBraz is in the middle of a lifelong love affair with Algonquin Provincial Park. She has been "moose jamming" with her camping partner and husband, Jason since 2007. She is the proud owner of a very silly and slightly obnoxious Moose hat. She has written other articles dedicated to the wildlife of Algonquin Park and plans to publish more in the future.