The Odd and Uncommon Histories of Commercial Ice

Before Air Conditioning And Bags of Ice

In the beginning years of college, I worked in a small grocery store with a farmer and grocer from The Great Depression Era that had been a produce department staff person and then a manager in the first Kroger grocery store in my city.

The small brick building of that first store still serves as a general store type of storefront on the corner of a commercial block north of The Ohio State University Campus in Clintonville.

He spoke of having no air conditioning in the early part of the 20th Century and how they'd spread sawdust on the flooring to soak up moisture in the summer months. This led me to wonder about the creation of air conditioning (I'd never had it at home since large trees cooled the house) and even the production of commercial ice.

It is easy to go into a food or beverage store now, walk up to a freezer case and remove a bag of ice for purchase. Some fast food stores sell bags of ice through the drive-thru window as well.

As a child, I'd seen delivery trucks emblazoned with the words Murray City Coal and Ice and Home City Ice on their side panels and often wondered if coal and ice both came from underground. The company in fact extracted coal from the ground and ice from frozen bodies of water. By the late 1920s, ice making machines and ice plants were becoming popular. 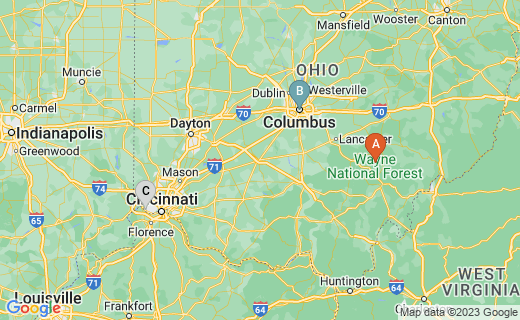 Several stories about the "invention" of ice - the harvesting of ice for commercial use exist. It is hard to tell which of them are the most accurate, since ice has been abundant on Earth for centuries - even if the pack ice north of Alaska and in Antarctica is melting. However, ice storage houses have been found in many countries of the world, some dating back several centuries. How did humans get from ice packs to commercial ice?

Frank O'Brien is mentioned on the web as being an assistant historian for the Allegheny County Historical Society, of which Ron Taylor is current President.

Historian Taylor maintains a webpage on Frank O'Brien's research into the history of commercial ice around 1897, ice harvesting, and more commercial ice production.

Ice houses have been found enough to show that Early American farmers put up or housed ice for the summer from about the later 1600s forward. That used ice saws to saw blocks of ice approximately 2' by 3' in dimensions from winter ponds and creeks on their properties. When the winter became too cold, their saws would not cut the ice.

In 1800 or just before, my father's ancestors immigrated to Pennsylvania, Eastern Ohio and points west. In eastern Ohio, they owned farms with root cellars that stayed at around 50°F even in August. They could be additionally cooled with ice form the ice house in a screen sort of apparatus, but meat had to be either canned or pickled.

Meanwhile, ice production in Boston MA became successful. Mr. O'Brien's articles how us that in 1806, 130 tons of ice were produced and 50 years later, in 1856, 136,000 tons were harvested for commercial purposes. Some of it was sold to concerns as far away as South America and India.

A steam-driven ice making machine was patented in 1851 by Dr. John Gorrie, who used it to make ice in Florida.

Its original intent was for making ice for Yellow Fever patients, but it held forth commercial promise. Dr. Gorrie's papers revealed that he may have invented some sort of ice cube trays, but it is certain that he served his patients iced beverages.

In fact, the Gorriw machine was further ridiculed in the press, perhaps at Tudor's urging.

Regardless of politics or prose, Tudor continued to harvest ice from New England and sell it in warmer countries that had little or no ice. He was rich.

Gorrie also invented a process for air conditioning, but never received the patent. He was soon ridiculed to death, so to speak and died in 1855 at age 51. If his air conditioning system had been patented and financed, cooling history would have been changed and the first Kroger store in my town would not have needed sawdust on the its summer floors.