How the Brain can Change

If the science writers are to be believed, a hot topic in the field of neuroscience at the moment is the brains incredible plasticity--that is, its ability to grow, adapt and re-map itself, depending on the input it receives through experiences. It's been suggested that this discovery has been the most significant development in our understanding of the brain for 400 years.

Neuroplasticity or cortical remapping is a turnaround from the earlier belief that a persons brain does not significantly change after a critical early period. Now the thinking is that all areas of the brain may be plastic..that is, environmental changes can alter connections between neurons, thus changing behaviour and cognition, even well beyond childhood.

Plasticity has big implications for us humans and our brains. Scientists have already established that through learning new skills, such as another language or a new dance step, new pathways can be forged in the brain. More interesting still, some experiments have also suggested that even just imagining learning new skills can produce significant changes in the brain.

An experiment conducted by Pascuale-Leone, Professor of Neurology at Harvard University, involved three groups of adult human volunteers, none of whom could play the piano. It was the task of the first group to merely stare at the piano, while the second group learnt five-finger piano lessons. The third group were only required to imagine they were playing the piano. All groups underwent brain scans before and after the experiment.

The results of the study were extremely interesting -in the first group, as might be expected, there was no change in the brain scans, while in the second group there had been an impressive change in brain areas relating to digits. However, in the third group, where participants had only imagined playing the piano, the changes in the brain were almost as significant as were found in the group that had actually learnt the exercises.

But plasticity can also mean vulnerability...

Just as the human mind has shaped culture, so too does culture shape the mind, causing some scientists to hypothesise that the startling exponential developments in technology may, over time, be 'reshaping' our brains..and not necessarily in a good way.

A New Type of Mind

One of the more vocal neuroscientists sending out warnings is Professor Susan Greenfield, Director of the Oxford Centre for the Science of the Mind. Greenfield is concerned that today's developing brain is being disturbingly reshaped by, among other things, an excess of visual stimulation.

Technology, in its various manifestations (and how we use it) is impacting on our plastic brains and in so doing could be inadvertantly laying the groundwork for a repatterning of the brains of future generations, who will have different abilities and ways of thinking as a result. Greenfield predicts we could be on the verge of a 'brain makeover', with gains in some areas and losses in others.

Greenfield posits, for example, that as an activity, while computer games are good for enhancing skills such as problem solving and fast reactions, they fall short in helping to develop attributes like empathy and communication. As Greenfield puts it the human brain is 'exquisitely sensitive to every event' and spending hours in front of a computer monitor playing games or lingering too long in the cyber social arena could be affecting the frontal cortex..the area of the brain that is more developed than any in other animal and also the part that helps us make sense of the world.

What I am advocating is a hypothesis. That if we were to scan the brains of young people who spend a lot of time playing computer games and in chatrooms, we would find that the prefrontal cortex is damaged, underdeveloped or underactive - just as it is in gamblers, schizophrenics or the obese.

Such experiences, says Greenfield, are all about the sensorial titillating here and now rather than interrelatedness through sequences and consequences:

To understand sequences and consequences is to think, to proceed from the sensory to the cognitive, to be able to consider and understand the development and interrelation of things beyond the here and now. The notion of sequence, the order of things, is what we mean by thinking.

Stressing the importance of narrative to the plastic brain, Greenfield claims, "it is crucial: it is your life. You cannot live your life backwards or start again. The notion of narrative is that you cannot go either way with a click of the mouse and then go backwards again." Over a long period of time, moving backwards and forwards all over the place on a screen and not sequentially, may be altering the structure of the brain.

To illustrate the point she gives an example of a book about a Princess locked in a castle. If you were to read such a story, more than likely you will care about what happens to the Princess. By contrast if you play a computer game in which the object is to rescue the Princess from the castle you probably wont really give a monkey's elbow about her --it's merely a task to do with reward and frustration and unlike real life, you know if you fail you can go back to the beginning and start again, thus there is no real emotional investment in the fate of the character...ie; no empathy.

Technologies such as the internet tend to work around immediate sensual gratification...what Greenfield calls the 'yuk' and 'wow' factor...and in turn the brain reacts by releasing chemicals such as dopamine that can affect the prefrontal cortex. Dopamine, which is also found in high quantities in cocaine and amphetamines, can cause problems with addiction.

Greenfield laments that after 5,000 years of civilization we may wind up emotional stunted creatures with excellent processing skills and fast reactions but short on empathy, attention span and deeper levels of thought. Whether she is right or wrong, I suppose only time will tell...

As this writer's brain is not all that it should be, due to having spent way too long on computers seeking the thrills of a sensory fix, you might like to get a clearer picture of all this straight from the horses mouth, through the videos at the following website: 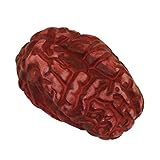