The 6th June 1944 marked the beginning of the end of the war which had started in September 1939 when Nazi Germany invaded Poland.

Early in 1940 Belgium and France were invaded by German Panzer divisions and the British Expeditionary Force was evacuated home via Dunkirk. The Germans did not push home this advantage choosing to invade Russia whilst Japan bombed Pearl Harbour bringing the United States into the conflict. The attention of the Allied forces was focused in Burma and the Pacific and North Africa whilst only Russia was fighting the Germans in Europe.

In July 1943 the Italian Dictator Benito Mussolini was overthrown and hanged by Italian patriots who immediately sued for peace with the Allies. This enabled the Allied forces to move through Italy via Sardinia and fight the Germans on Italian soil. The British 8th army and the United States 5th army battled through Italy in what would be a rehearsal for a full scale invasion and in a move which made the Allied forces feel that the war was turning their way.

The British and American navies were gaining supremacy on the seas and Germany was running short of foods and essential supplies. With Allied bombardments continuing German moral and the average citizen were suffering. The invasion had always been planned for 1944 but it took on more importance when it became known that the Russians were breaking through on the eastern front. Invasion from the west became more urgent to avoid the replacement of rule by Berlin to rule by Moscow.

The training of the army started in earnest. Over 3/4 million US soldiers were stationed in the west of England. Soldiers were trained in the use of rifles, machine guns, mortars and the ever popular Mills grenade which would explode a few seconds after the priming pin had been removed.

The Allies had a greater weight and variety of artillery than the Germans but the Germans had the advantage in anti tank guns which were self propelled and had a longer range than the Allies. Both sides had tanks but the Allied Shermans, Churchills and Cromwells were not he equal of the German Panther or Tiger with their thicker armour and heavier guns capable of firing at a longer range. The Allies built specialist vehicles with the invasion in mind, such as the Crocodile which was a Churchill tank which towed an armoured trailer full of fuel and through its fire gun it spurted jets of flame burning the enemy out. One lifesaver was the Flails known to soldiers as the Crabs. These consisted of a Sherman tank fitted with large chains attached to a revolving drum which swept the ground in front of the tank clearing mines as it went.

Many killed during the Dress Rehearsal

Dress Rehearsals are meant to be like the real thing but in April 1944 the Allies had more than they bargained for. The US army had been practising with a number of landing craft at Slapton Sands and were surprised by German U boats- at least 700 men lost their lives that day. As the bodies were brought ashore stories were told of land slippages which had caused their deaths;all to keep secret the news of the Invasion. Ordinary Seaman Jack Buster Brown of HMS Kellett, recalled"I remember the dozens of corpses floating in the sea" Ordinary Seaman Geoffrey Cassidy saw the situation develop " US ambulances were taking the dead away, six to a van, and it went on until four in the morning" - extracted from "Forgotten Voices" by Max Arthur.

The Allied commanders were all experienced men given much more freedom of command by Churchill. The Supreme Commander was General Dwight D Eisenhower. The Ground Force Commander General Montgomery of Desert Rat fame was responsible for success or failure on the ground. Air Marshall Sir Trafford Leigh Mallory was tasked to smash German communications in France and Belgium, to carry troops and provide cover for invading forces by bombing enemy defences. Admiral Sir Bertram Ramsay was in charge of the Allied Navy Expeditionary force across the channel and providing cover for landings by using naval guns against defences. In contrast the German armies were struggling all over Europe with a thinly spread army. Sensing the change amongst the Allies they tried to strengthen forces in western Europe with Field Marshall Von Rundstedt appointed as commander in chief and Field Marshall Rommel in charge of ground forces.

The amount of men, vehicles and equipment needed to be moved across the channel for the invasion was enormous. As no port was available artificial harbours were built and towed across the channel. The harbours were known as Mulberries but the soldiers referred to them as Noah's Arks. The Allies would need large amounts of oil so one of the first objectives of the assault was to capture the port of Cherbourg. Once in Allied hands an especially designed oil supply pipe codenamed Pluto was put into place.

The Preparations, both equipment and manpower training and build up could not be hidden from the Germans who knew an invasion was coming but did not know where. The Allies tried to misfeed locations to the Germans sending out signals containing false information. Dummy craft were assembled on the eastern side of the UK to confuse the Germans even more. Perhaps the most dramatic and well known trick was "the man who never was". False papers, "Official Secrets" were placed on the body of a dead British Naval Officer. The body was dropped into the sea off the coast of Spain and washed up. The "official Secrets" were sent to and believed by, Berlin.

Despite all the Allies attempts to hide and confuse the German High Command were certain the attack would take place in wither Pas De Calais, Normandy or Brittany. They didn't know which or indeed there were some thoughts it might be all three areas. As a result the Germans took no chances and had their forces thinly stretched out over the whole of North Western France. Attempts to move forces to the areas of attack were thwarted as the Allies destroyed their road and rail links. Adolf Hitler was quoted as saying " If we do not stop the invasion and do not drive the enemy back into the sea, the war will be lost".

The invasion was sited at Normandy which was chosen because it had long stretches of sheltered beaches suitable for unloading troops munitions and stores. The beaches lay within the range of fighter aircraft based in southern England. A large port was needed to supply the soldiers once landed, therefore a proximity to Cherbourg was ideal. If Caen could be captured then the road and rail network for the region would be under Allied control. The geography of the area with thickshrub lands, high banks and flooded lowlands meant that it would be very difficult for the Germans to assemble large amounts of armoured forces quickly. The plan was to establish a deep bridgehead in Normandy, overrun Brittany and drive the enemy eastwards. The criteria for the time of the invasion was that it was made in the half light of dawn and as soon after low tide as possible, so that German obstacles and mines on the beaches would be spotted.

The weather turned vicious and the future of the Invasion was in doubt. However late in the evening of the 4th June General Eisenhower made his final decision that the assault would take place on the morning of the 6th June 1944.

Private Peter Fussell of No 1 commando remembered "At about four o'clock in the afternoon we were told to stand down.......the weather had broken..........we were told that a decision would be made on Sunday" 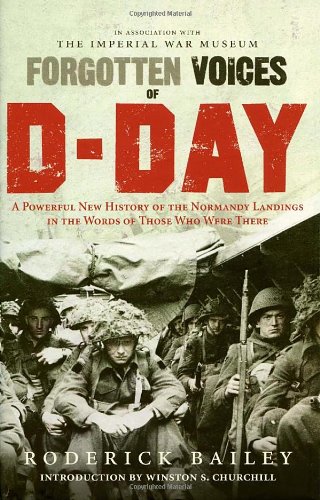