The great red cedar and Sitka spruce trees of the Pacific Northwest are among those important to the way of life of the Haida, the Kwakiutl to the south, and other First Nations. A magical tree on the Queen Charlotte Islands is an icon to the whole of British Columbia. These trees have been and are a source of housing materials, poles for carving histories, and a style of hat that signifies rank status within communities and clans. Particularly old trees are respected for their longevity. They are admired as a sort of national treasure to First Nations peoples and the country.

The spruce has been used particularly by the Kwakiutl as well as the Tlingit (both Canadian and Alaskan) for specialized hat making. Portions of the tree are woven into a wide conic hat with rings above to make a high top. The rings are indicative of elite status and high ranking within a community or clan - for instance, a chief. In addition, atop totem poles among these clans, one to three figures called "watchers" wear these hats carved in cedar. The watchers keep watch over the house behind the pole and are said to alert the owner of problems in the night, particularly attack.

High hats similar to the watcher/chief hat have been worn by men in Korea, but made of black cloth material. In South Korea, an ancient pine is protected with a tall fence around its base; visitors come to pay their respects and admire its beauty and strength - it is Grandfather Tree.The parallels of South Korean and Pacific Northwest cultures become uncanny.

In the Queen Charlotte's, one older spruce was not only aged, but also a different color than all the rest of the spruce forest. This Sitka Spruce was gold, rather than green, and lived into the late 1990s. From afar, it stood out from the forest in the sunlight, looking as if forged from real gold. None like it had been seen before, according to any histories, oral or written. 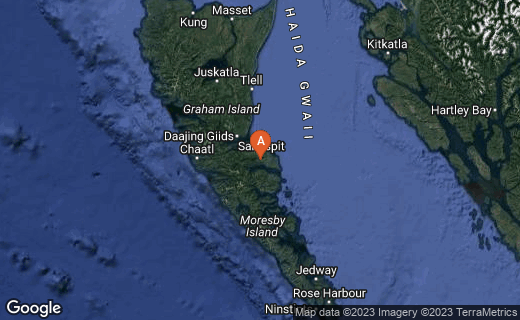 Like the golden eagle admired in Korea and the Pacific Northwest, the Golden Spruce was admired as outstanding in its difference. A rare albino crow came to live near the singular spruce and thoughts in this region began to include these of a special sort of magical blessing for the forest ans the land of tall trees. All the while. the logging industry had been active, in some places shaving stands of huge trees from the landscape as if by giant razor.

The Golden Spruce, named Kiidk'yaas, was admired from across the Yakoun River in Haida Gwaii running nearby, and it was difficult to approach the tree on foot. No outstanding measures were taken to cordon it off or protect it. Today, it lies where it fell, sapling growing around the sides, ground, and on top. Tree enthusiasts and researchers have been working with the saplings for decades without ever achieving another tree of the same clear shade of gold.

The logging industry did not kill the Golden Spruce, whom the Haida stated in their stories was a human boy transformed into this giant living landmark. A small boy long ago before 1700, running from harm with his grandfather, heard his elder tell him to look back. He did look back and his feet became instantly rooted to the ground. He eventually became the giant golden tree, rooted to the spot on the Yakoun River.

A single unstoppable madman killed him. 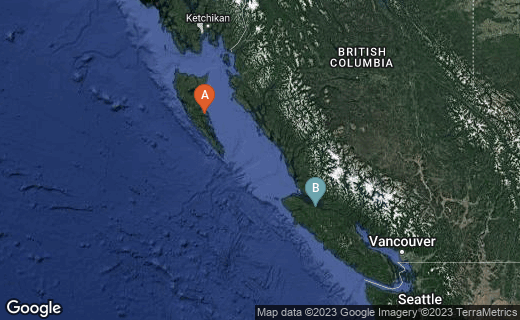 B
Alert Bay - A center of Kwakiutl life:
Alert Bay, BC, Canada

The Golden Spruce: A True Story of Myth, Madness, and Greed
Buy Now

The Golden Spruce: A True Story of Myth, Madness, and Greed

The author John Valiant is a thorough researcher that has traced the culture of the Haida of the Queen Charlotte's to before Captain Cook's greetings.

Valiant tells us of Spanish the explorer Juan Perez Hernandez in 1774, who sailed up to the islands and, seeing the eager expressions of the locals as they paddled their kayaks out to the ship, left quickly in fear of his life. In fact. Valiant found that several explorers landed in the Queen Charlotte's before Cook and were never seen or heard from again.

Even more interesting is the relationship between native inhabitants and Europeans, once settled in the Islands. A complex system of stealing back and forth between the two ethnic groups developed and was a part of the local custom. However, it ultimately led to deep-seated suspicions on both sides. Enter the logging industry.

Grant Hadwin was a logging scout in the Queen Charlotte Islands area, searching for stands of trees that would best benefit the industry. He had experienced a history of mental health conditions, which took over his reasoning to destroy work and relationships. Well trained physically, he carried massive gear across the Yakoun during a winter night and cut into the Golden Spruce in a way to cause it to fall under a strong wind. This was a protest against the logging industry, although not logical. He was arrested evenutally, but escaped before trial and may or may not have died. The Haida were deeply hurt by the murderous loss of their tree.

Wood from the fallen tree, the Golden Spruce, belongs to Haida Nation. Some of the wood went into the making of a Canadian national guitar that honors important people and cultural elements.

The national guitar is called the Six String Nation. The Haida leaders felt that contributing part of their special tree was way to continue its story. Videography below is by Geoff Siskind.