The Scottish Wars of Independence: John Balliol vs. Edward I

Seal of a King

King John was crowned on the 30th November 1292, St. Andrews Day. The ceremony was observed by all of the important people of the realm. As was the ancient Celtic custom, John took his seat upon the ancient Stone of Destiny. However, in terms of hindsight the ceremony was overshadowed by the fact that John had to swear an Oath of Fealty at Edward’s parliament in Newcastle, England. John, had hoped that the submission showed to Edward at Norham the year before had been temporary, but the iron fisted King had other ideas.

John’s predecessor Alexander had also had to swear an Oath of Fealty for his lands in England, and there had been no issue. Edward himself had to do the same for his lands in France to their King, so the issue was not thought to be important. Edward on the other hand was deadly serious, now that the King of Scotland had sworn an Oath of Fealty to him, he now considered Scotland to be part of his realm, in the same way that one of the English counties was.

Right from the start it was apparent that the rule of Scotland was not solely the responsibility of John. On Edward’s insistence, John appointed an Englishman to be his new Chancellor, Master Thomas of Hunsingore. He advised John to set out a series of changes to certain aspects of Scottish Law and Customs bringing it into line with the English system. John also introduced an Officer of the Treasurer, another example of the gradual deterioration of Scottish tradition and culture. Edward even ordered that the Royal Seal of Scotland be changed, to acknowledge John’s Oath of Fealty, it was more than quite clear that John was not really a King, more of a Governor of Scotland.

The humiliation of King John continued when Edward insisted that he would hear any complaints from John’s court personally, thus further undermining his authority. Basically if somebody went to John with a complaint and he then subsequently delivered an unfavourable verdict, the plaintiff could simply go to Edward and have the verdict overturned. Each case brought more misery for the Scottish King; on one occasion early on his reign, he heard a case concerning a Burgess from Berwick. Edward, of course was on hand to step in and exert his authority. John complained, stating that Edward was crossing the line, citing the Treaty of Birgham as proof. But the ploy failed, Edward forced John to back down in public and issued letters across his Kingdom stating that the Treaty was no longer valid, including Scotland’s status as an independent country.

The most embarrassing case that John had to endure was when he had to appear in person to answer a complaint from one of his subjects. The normal custom was that a representative would speak on John’s behalf, but Edward would not allow it and insisted that John speak to him directly, another humiliation for the puppet King of Scotland. English chroniclers at the time raved about John travelling back to Scotland, head hung in shame as he prepared to faces the nobles.

In the summer of 1294, Edward was finalising plans to wage war against the French King, Phillip IV. The English King was angry at having to give up the province of Aquitaine and there was also considerable disagreement over who held possession over Gascony. This proposed war, led to increased tension between England and Scotland.

In June Edward ordered John south to Portsmouth, he told him to bring 10 Earls, 16 Barons plus their Knights, they were to assemble at Portsmouth Docks in September. This was an indication of just how much the political landscape had changed in Scotland. John’s Kingdom had been reduced to a mere client of Edward’s England. It was true, that one of John’s predecessors Malcolm IV had served with the English King Henry II in France in 1159. But on that occasion, it was less obvious; even so, upon Malcolm’s return to Scotland, he received scorn from his nobles for doing so. For the Scottish nobles, tempers were wearing thin, not just with Edward but with their own King, for his weakness and failure to stand up to the tyrannical English Monarch.

Between the summers of 1294-1295, King John was effectively sidelined by his own nobles, who all agreed that the situation with King Edward had gone too far. In an attempt to resolve the crisis, they set up a Council of 12 (four Bishops, four Earls and four Barons), notably the nobles loyal to Robert Bruce were absent and took no part at all.

The Council sent envoys to the French King in July 1295, asking to forge an alliance against King Edward. Phillip agreed, and ‘The Auld Alliance’ as it was known was sealed on the 23rd February 1296 and ratified at Dunfermline by John and a number of Nobles and Bishops, again representatives of Robert Bruce were absent. Edward was as you could imagine was quite livid, but he had troubles of his own to contend with. He was dealing with the third and final Welsh rebellion led by Madog. His opportunity to punish the Scots for their treachery wouldn’t come until he had dealt with another Celtic nation.

The Battle of Dunbar

Edward did not hear of the Scottish-French Alliance until July 1296, but it mattered not, invasion was already on his mind. In March of that year, he crossed the River Tweed, approaching his first obstacle, the border town of Berwick, surrounded by high city walls. The Scottish defenders had fortified the town as best they could. Edward offered the defenders the chance to surrender in exchange for their lives; the offer was scorned and refused, the defenders all too aware what a promise of Edward’s amounted to.

The English attacked; the Scottish valiantly held on for three days, before being overwhelmed by Edward’s forces. The English took the town, slaughtered the inhabitants, replacing them with colonists from the neighbouring English County of Northumbria. The bulk of the Scottish army was waiting for the English further north along the coast at Dunbar Castle.

The wife of the Earl of Dunbar, a fierce patriot handed over control of the keep to the Scottish army, while her husband fled to Berwick to pledge his loyalty to Edward. Only a third of the entire English force had advanced onto Dunbar, they were commanded by Warenne, Earl of Surrey, they advanced, preparing to meet the Scottish in a head on encounter. Surrey’s army was packed full of well equipped veterans, whilst the Scottish lacked both experience and quality.

Surrey made the decision to reposition his troops, although not intended, it served to fool the Scottish Commanders into thinking that the English were retreating. The Warriors charged, leaving the safety of the hill they defended behind them. Owing to their lack of discipline, the Scots broke formation, charging wildly. The English on the other hand maintained order and slaughtered the Scots easily. The Battle of Dunbar was a complete disaster for the Scottish, thousands died and at least 130 nobles were captured. In just one battle, King John’s army had been virtually annihilated; Edward had won an easy victory.

Edward’s victory had effectively ended the resistance of King John’s Scotland. As word of the disaster spread, Scottish morale plummeted, and the surrenders soon mounted up. At Roxborough, the fighting continued sporadically for a few days, before the Scots gave up. The Castles at Jedburgh and Edinburgh held the English off for a few days, before Edward deployed new, powerful siege engines. The defenders had no wish to endure the subsequent bombardment, so they surrendered. Stirling Castle didn’t put any kind of fight, the defenders simply fled, leaving the keys to the Castle with the caretakers who fled themselves when the English army appeared.

King John was a broken man, he and his Lords fled to the North East of Scotland to mull over the possibility of total surrender. On the West Coast, one proud Scot was taking the fight to the English. Alexander, head of the powerful MacDougall clan continued to fight, but unfortunately his efforts were in vain.

In late August, nearly 1600 nobles collected at Berwick to pledge a personal oath to Edward. The pledge would come to be known as ‘The Ragman’s Roll’. William Wallace, said by some to have been born to a noble family did not sign the roll. It may well be because of his fierce patriotism and loyalty to King John. Although it is not certain whether Wallace was born to a noble family, and even if he was, he may not have been considered important enough to sign the roll. I like to think that he refused out of defiance and patriotism.

King John of Scotland officially surrendered on the 2nd July. He sent a letter to Edward begging forgiveness for his crimes. He effectively passed the buck by blaming bad advice from his nobles for his actions. Edward decided to accept the surrender, but to make John pay; he subjected him to a humiliating ceremony where he had to renounce the Treaty he'd struck up with France and apologise to Edward’s face. The English King accepted the apology by stripping him of his throne, and literally stripping him out of his royal robes. Finally, stark naked John was thrown to the ground, the humiliation was complete.

It seemed that Edward had completed his goal in subduing his Celtic neighbours; the Welsh had been crushed by War and Castles. Now, the Scottish who had managed to halt the advancing Romans, centuries before had succumbed to the English after just one battle. But if Edward thought that his problems were over, then he was dead wrong. Scotland would not take its defeat lying down and soon, its most famous hero would emerge...

More on the Scottish Wars of Independence

My Next Article in the Series

A History of Scotland
Buy Now 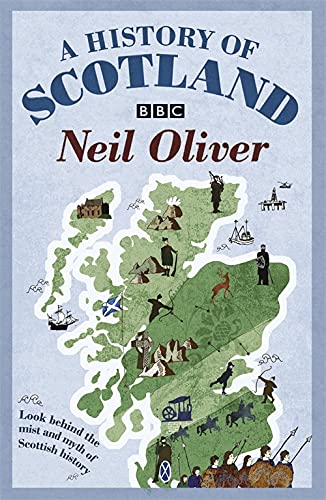 A History of Scotland: Look Behind the Mist and Myth of Scottish History
Buy Now