The second decade of the 21st century began with the motivational force to discuss on many matters of human beings like democracy, capital, inequality, wealth distribution and social status of people etc. It was the publication of a bestselling book “Capital in the Twenty First Century” authored by a young French economist Thomas Piketty. It has generated a lot of discussions and debates among all including politicians, social scientists and even common people. Piketty’s book is primarily dealing with the distribution of wealth and income among social agents. His historical based data are presented from the world’s largest income-wealth database supplied by the Paris School of Economics.

The original version of the book was published in French language titled “Le Capital au XXIe Siecle” in 2013 and its translated English version in 2014. The book has given special emphasis on the analysis of inequality and wealth in United States and Europe. Anyway, the work has reached into many people and has also translated into different languages. Here this article provided a brief note on Piketty’s view on wealth, income and inequality.

According to Piketty, inequality is one of the core features of capitalist system. Further it is very essential for the growth of an economy since it encourages innovation and technological improvement. But, Piketty opposes the existence of extreme sense of inequality in the society. He thinks that, extreme inequality may threaten the democratic system of nations. This is because, top 10 percentages of the people of many countries are holding considerably heavy amount of total wealth. The remaining few share of wealth shares by the 90 percentage of the people. Here the middle class, the majority of the society are extremely unhappy with this polarization of wealthy and poor people. But they are the real force behind the electing process of democratic representatives. So extreme inequality may threaten to the democratic system of the nation.

According to Piketty, there are many things which are essential for consideration while studying on inequality. It includes aspects like social, political, economical and even psychological. Fundamentally, in modern times wealth accumulation is doing by investing in equities, real estate and properties. On the other side, the earlier form of wealth creation had done by acquiring land and other physical assets. So the appreciation of its original value has a greater role in the process of wealth accumulation. To explain this, Piketty uses the analysis of two variables like economic growth rate (g) and return from capital (r). According to him, inequality tends to increase when return from capital exceeds over the growth rate of the economy (r>g). Higher is the gap between these two variables would increase the existence of inequality in the society. So, to solve this, government needs its urgent intervention by doing public finance or taxation methods. Otherwise the above mentioned issue may arise.

History has shown the long run nature of inequality because of higher return from capital (r) than the economic growth rate (g). Piketty presents his data of several years and which clearly shows that, inequality was much higher in Europe in the early 20th century. But the beginning of present century shows an increasing trend in inequality especially in United States. Compared to Europe the level of inequality is more danger in United States. Taking the data of wealth distribution of the last 100 years, initially, top 10 percentage of the population owned almost 90 percentage of the total wealth of the society. But later, by the end of 20th century, the inequality data gave us a hope. The reason is, top 10 percentage of the people owned 60% of the total wealth. But, unfortunately, the things have got worsened in the previous decade particularly in United States. Piketty list outs many reasons for the decreasing of wealth ownership by the top class people in the second half of the 20th century. Some of them are, the two World Wars, reconstruction stage of nations and investments after the war period etc. Further, the second half of the 20th century witnessed liberalization and globalization. Since then, the growth rate of many economies grew above 5 percentages.

Are you aware of economic inequality and consider it for your poll in elections?

Inequality is arising out of social structure. It can be considered as good for the economy unless the extreme inequality exists. Historically, there are many evidences for the existence of wealth inequality. One of the major reasons for this was the top class of the society earned much higher return from their wealth and properties than the growth rate of the economy. Before the so called industrial revolution, the total output and the growth rate of the economy were almost close to zero percent. But the return from wealth (from land and other properties) was much higher. Later, even thought industrial revolution increased the growth of the economy, the rate of return from capital also goes up. In fact, inequality occurs due to the systematic drawbacks of the society.

Moreover, Piketty also says that, it will be very difficult when we try to balance the growth rate of the economy with the return on capital. The reason is that, technology and innovations are occurring. So, it is very difficult to balance the uncertain future conditions. Further, the portfolio management has also improved a lot to ensure higher return from capital or investments. He also listed out many reasons of increasing inequality especially in developed countries like United States. Sometimes, the educational system is unequally accessible and causes for the polarization of skilled and unskilled people. The technological change is initially fruitful for the wealthy in many cases. 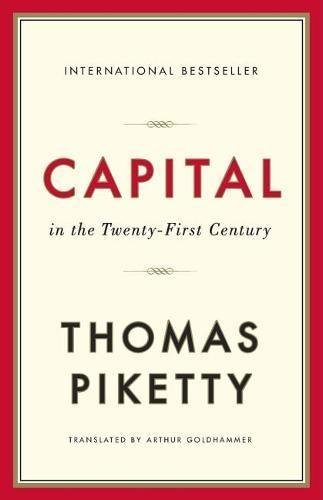 Thomas Piketty’s work has done lot efforts and the ideological debates and discussions are encouraged. Some of the critics are says that, the inequality is still worsening in each day. So we need more government intervention in the form of taxation. Then only the extreme inequality can be reduced and the democratic practice can be survived. In fact, the book has become a revolutionary one in almost all fields of social science.