Thelma is a Filipina expat living in Germany. She is a very creative person, shares tips and DIY about anything she has done in life.

Why does a person want to leave his country? Why did I leave my home country Philippines? Why did I immigrate to another country for the second time? Those three questions came to my mind today as I was having a break from my work. There are lots of reasons as I came to realize now, how restless it seems to be for other people who don´t know me much.

I have emigrated twice in my life that I think I have tips and experiences I can share with you. The first emigration was in going to Germany and the second one was in going to Ireland with my husband for we were fed up with our lives in Germany and wanted to have some changes like living in a countryside surrounded by beautiful landscapes, nature, peace and quiet surroundings but most of all friendly people.

When you are planning to leave your country, be sure that it is what you want to do and nobody pushes you to do so. Going to another country is not as easy as you might think it is and that you must be aware of what might come into your life. The changes of climate, food and the people around you. There would be no relatives you can turn to. You are on your own!

Every person has own reasons to leave his country. If you are just having a holiday abroad, it´s okey. You can go home whenever you like. If you have applied for a job abroad and leave your family for a few years, you have to sacrifice yourself but it´s a good sacrifice for the benefits of your family. For the education of your children and their future. If you´re a woman married to a foreigner, you have to go with him to his country because you are his wife.

All these are reasons to leave his/her beloved country. You can prepare yourselves for this "new" life by doing research about the place you are going to.

Living Language German, Complete Edition: Beginner through advanced course, including 3 coursebooks, 9 audio CDs, and free online learning
This book is a must in learning a German language. This is a complete edition and you can choose your own time in learning, whenever you can.
Buy Now

Learn the language of the country you are planning to emigrate to or work in .When I came to Germany, I only knew a few words in German. Good morning, good afternoon, good night, eat, drink and of course I love you. That was a weird time for I talked to my parents-in-law (except my hubby who can speak fluent British English) with hands and feet. Dictionary was always in action. If you know what I mean.

Germans in the 80´s were not used to English language compared now where you can hear almost all songs in English. Even German language now is mixed up with English words. I felt sometimes like an idiot because I just smiled without understanding what the people around me were talking about. I was misunderstood and was not able to contribute to the conversation. Then, I could understand but could not express myself. When I got angry I talked in Bisaya( southern dialect in the Philippines), but nobody got me. I was even more angry.That was my motivation on how hard I learned the German language.

Research about the country you are about to live and work in. Find everything about that country, the people, their customs and traditions. By doing so, you are prepared and can expect what might come in your way.

The first month in Germany was difficult. I did not know that the Germans only eat one warm meal in a day and it´s on lunch time. The German traditional breakfast and supper are all bread, mostly dark bread with all varieties of hams, cheeses, marmalade's and honey. As a Filipina, I used to eat 3 warm meals a day with always rice on the plate. Bread which is white was only a snack. You can imagine how thin I was with 36 kilos in 1981 especially that rice was only once a week. That was in the 80´s when pizza, spaghetti, hamburger and all sorts of foreign food was not as popular as it is nowadays.

The cold weather was the hardest thing I have experienced. I did not want to go out for it was so cold and the snow was below my knees. Then the window was frozen and I was not able to see outside that I scratched the ice. It was -10°C.

A Filipina told me that her mother opened the freezer in their house and asked her daughter to climb inside so she will know how cold it will be in Germany. Her mother did not like her daughter to go to Germany.

Apply for a passport if you don´t have that yet. You can apply at the Ministry of Foreign Affairs in your country. Then you need a visa for the country you are planning to go and ask about the requirements you need.

Note: If you are a woman who has been promised to have work in another country, be careful with your Passport. Don´t give it to your boss or whoever. You can show it to them but you have to keep it with you. It´s yours and it should be with you.

Of course you will not forget to bring money with you as it is very important for your travel in an unknown country. It depends on you how much you have and might need. Always keep it under your clothes when travelling.

Communicate with the local people:

When you are living in your new country, try to communicate with the local people. You are stranger to them as they are to you. Being friendly is the best thing to do. As a Filipino it is hard to be alone for Filipinos don´t like to be alone. They/We prefer to be in a group when going out.

A friend of mine went to the church three times in a day just to check out if she could meet one Filipina during the holy mass. She was new to the country she was working in. It was so funny for me but then I understood why.

A View At The Rhine River In Cologne, Germany

Have you emigrated before?

There are many Filipinos nowadays who live in another countries like USA and Europe due to marrying non- Filipinos, as well as those who are working outside the Philippines. The world is getting smaller everyday. Homesicknesses are often cured by using technical devices such as skype, mobile phones and even through Facebook. Through FB, you´ll even know what your friends are eating at the other side of the world. It was unthinkable 30 years ago. But using these modern communication apparatus, we should be wise and careful. There are some scam everywhere. 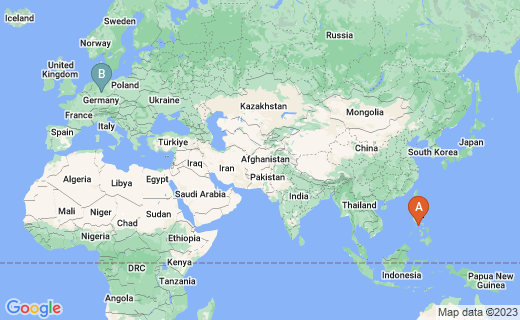