Ieyasu Tokugawa was a very significant figure during the Sengoku period or Warring States period of Japan. Following Oda Nobunaga and then Toyotomi Hideyoshi, he became know as the Third Unifier of Japan. His actions shaped and determined the course of a nation.

Similar to Toyotmi Hideyoshi before him, Tokugawa Ieyasu had several names throughout the course of his life. This was fairly normal for people of status in this era of Japan. Tokugawa Ieyasu was born with the name Matsudaira Takechiyo in 1526. He was the son of a young daimyo in the Matsudaira family named Hirotada Matsudaira. During this time the Matsudaira were caught in the crossfire of a war between the Oda Clan and Imagawa Clan. The family was divided on which side too choose. Ieyasu's grandfather was executed as a result of the conflict, which is likely what caused Ieyasu's father Hirotoda to favor the Imagawa. 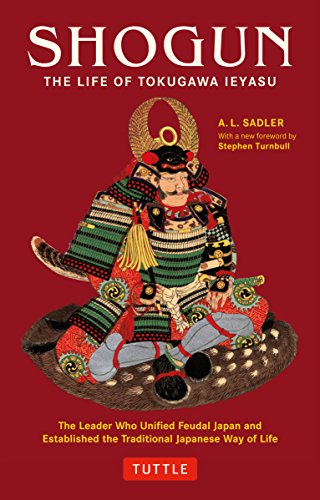 When the Oda Clan began pushing in to the Matsudaira homeland of Mikawa, Hirotada sought the help of the leader of the Imagawa clan Imagawa Yoshimoto. Imaga Yoshimoto agreed to help under the condition that Hirotada sent the six year old Takechiyo (Ieyasu) to him as a hostage. The leader of the Oda Clan, Oda Nobuhide (The father of Oda Nobunaga) had the six year old kidnapped and held him hostage. Oda Nobuhide threatened to kill Takechiyo if his father didn't switch sides. Hirotada refused however hoping the sacrifice would show his loyalty and secure his place with the Imagawa. Oda Nobuhide did not execute the child and instead kept him as a hostage for the following three years. During this time both Oda Nobuhide and Hirotada died leaving the young man's fate in question.

Due to Oda Nobuhide dying, the Imagawa pressed the attack against the Oda Clan. Oda Nobuhide's eldest son led the Oda Clan, but when the Oda were on the brink of defeat his second son Oda Nobunaga agreed to a deal to release the young Ieyasu (Still Takechiyo at this point) over to the Imagawa in exchange for them to drop the siege.

The Imagawa clan didn't take Ieyasu out of the kindness of their hearts, and though the scene changed for him he was still a hostage of the Imagawa until he turned 15. At this time he came in to manhood, took a wife, changed his name, moved back to Mikawa, and while technically free was a vassal of the Imagawa. He was ordered to fight the Oda Clan and made something of a name for himself by being successful.

For More Information About Oda Nobunaga

Shortly thereafter the Oda Nobunaga became the leader of the Oda Clan and Imagawa Yoshimoto gathered all of his forces (Believed to be around 35,00) to severely outnumber and destroy the Oda. Oda Nobunaga was crafty however and led 1,500 hundred men in a surprise attack that completely decimated the Imagawa army. Imagawa Yoshimoto was killed in the battle which would be come to known as the Battle of Okehazama. Fortunately for Ieyasu he had been ordered to defend a fort elsewhere and was not present for the battle.

With Yoshimoto dead and the Imagawa clan in disarray, Ieyasu decided that he should ally himself with the Oda Clan. His family was still with the Imagawa however, so his switch had to be made in secret to protect them. Ieyasu waited until the right moment and announced to the world that he was switching sides by taking over an Imagawa fortress. He was then able to trade hostages for the release of his family.

After the switch Oda Nobunaga allowed Ieyasu (At this time named Motoyasu) to rule his homeland of Mikawa and he spent several years fighting to gain stability in the region, including a well known battle against the Monto monks that refused to acknowledge his rule called The Battle of Azukizaka. It was during this time that he finally changed his name to Tokugawa Ieyasu.

Tokugawa Ieyasu remained a close ally of Oda Nobunaga but struck out with his own ambitions working with both of the famous clan leaders Takeda Shingen and Uesugi Kenshin at different times. However when Oda Nobunaga's brother in law chose to side his clan (Azai) with an enemy of the Oda Clan (Asakura), Tokugawa Ieyasu went to aid Oda Nobunaga in The Battle of Anegawa. At the start of the battle the Oda Clan faced off with the Azai, and the Tokugawa faced off with the Asakura. Ieyasu's forces were able to gain an advantage over the Asakura, which allowed him to pushed his force in to the Azai flank. This allowed the Oda and Tokugawa clans to finish the battle in victory.

After this battle Ieyasu's former ally in Takeda Shingen laid seige into Tokugawa land. This time Oda Nobunaga had to send aid to Ieyasu. However even with the reinforcements of Nobunga, Ieyasu couldn't match the tactical genius of Takeda Shingen and was defeated narrowly escaping with his life. Ieyasu quickly built another force but avoided open battle with the Takeda. Shortly thereafter Takeda Shingen died of illness. As Ieyasu prepared to continue his war with the Takeda, Oda Nobunaga was able to bring the main weight of his force and personally assist in the defeat of the Takeda in The Battle of Nagashino. This battle didn't completely end the Takeda threat, but allowed it to become more controllable for Ieyasu.

By this point Ieyasu was a trusted ally of Oda Nobunaga along with Toyotomi Hideyoshi, and the Oda Clan was easily the most powerful clan in Japan. Oda Nobunaga's intentions of ruling Japan we beginning to come to fruition. However Oda Nobunaga was betrayed by another member of his inner circle Akechi Mitsuhide at The Incident at Hinno-ji. After he executed Oda Nobunaga, Mitsuhide plotted against both Toyotomi Hideyoshi and Tokugawa Ieyasu fearing they would want revenge. Ieyasu carefully maneuvered his force back carefully avoiding the Akechi forces seeking him out, and intended to seek the right opportunity to exact revenge upon Mitsuhide. Toyotomi Hideyoshi got to Mitsuhide first and defeated him.

For More Information About Toyotomi Hideyoshi

After the death of Oda Nobunaga several battles were fought by the various clans trying to seek control. As Toyotomi Hideyoshi battled Shibata Katsuie for contol of Nobunga's position, Ieyasu sat back and didn't choose sides. Later however he would choose to side with Oda Nobunaga's son against Toyotomi Hideyoshi which resulted in a bloody stalemate that if continued probably would have been the end of Tokugawa. However, Hideyoshi made peace and negotiated with Ieyasu which resulted in them becoming uneasy allies again.

A few years later after assisting Hideyoshi defeat the last independent clan of Japan he was given a large sum of land by Hideyoshi, and became the second most powerful man in Japan. While he was in no way openly defiant of Hideyoshi, he was allowed to rule his own lands in his own way, and Hideyoshi didn't interfere. He as chosen to be one of Hideyoshi's Council of Five Elders and served as a war councilor while Hideyoshi attempted his assault on China.

After Hideyoshi died, the land was somewhat divided again similar to after Oda Nobunaga died. Ieyasu gathered supporters around him and despite the fact that he was the most powerful of The Council of Five Elders, some supporters of Hideyoshi rallied against him. He was even accused of plotting against the Toyotomi administration which he was perhaps the highest authority in. This led to one of the most significant battles in Japanese history, The Battle of Sekigahara.

After success in this battle Ieyasu was unquestionable the most powerful man in Japan and took his place as the Third Unifier of Japan. Eventually he would be given the title of Shogun and worked to stabilize his position. He outlived all of the other great samurai men of his time and gave birth to the Edo Period of Japan. His line would continue ruling Japan as Tokugawa Shoguns for the next 250 years.

Check out my other articles about legendary samurai.