Just about 40 minutes by car and 35 miles from the border of Boston, Nashua on the Merrimack River is the second largest city in New Hampshire. It is also Number 94 on Money.com's list of the Top 100 Best Places to Live in Amerca.

With a population near 90,000 people, Nashua has been included New Hampshire's southern economic projects as an important part of the larger Boston area. It's been named a Best Place to Live in America several times, as well as one of the safest American cities. Textiles as a foundation of economy have largely been replaced with technology in Nashua with such organizations as the Nashua Corporation (PCs and disks), BAE Systems, and Hewlett-Packard.

Helping all this along is the ongoing economic development and rebuilding in the older downtown area of the city, a set of projects undertaken my many cities in order to continue to grow. New downtown residences, commercial companies, entertainment venues, and various dining places are increasing yearly. The Nashua River is also in tight focus for development into a prestigious waterfront.

Across the city and state borders of Boston MA, Nashua on the Merrimack River is the second largest city in New Hampshire.

Nashua on the Merrimack River 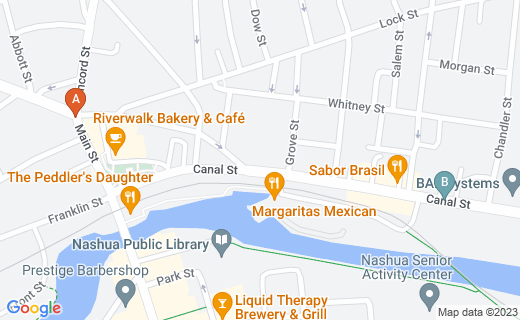 Author and poet of the Beat Generation, Jack Kerouac was born in Massachusetts in the town of Lowell, a few miles southeast of Nashua, New Hampshire (see map below). He was a colorful character with a long and complex backstory that began writing about his own life at age 12. His 1957 On The Road became one of the Time Magazine 100 Best All Time Novels.

Lowell MA celebrates Kerouac's birthday and work and connects visitors with tours to the nearby Nashua locations relevant to the celebrations, 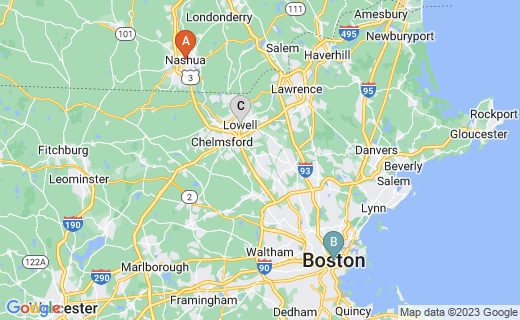 Nashua Transit began as the Nashua Horse Drawn Railroad back in 1886.

Mass transit is made available in Nashua NH by the Nashua Transit System, also called NTS and CityBus, with 10 fixed routes and a dedicated After 7 evening system. City Lift serves senior citizens and ADA eligible individuals..

This system was named one of the 10 Most-Improved Transit Systems in America in the mid 2000s by Metro Magazine. In addition, NTS offers specially dedicated ADA paratransit for the disabled population and anyone over 60 years old, called City Lift. The company has been in business since 1886, when they ran horse-drawn trolleys, and now has Markie the Meerkat as its mascot. When you visit the website, you can use its Google Route Planning service as well.

In Nashua, military veterans, those ages 60 and over, and those with Medicare cards are considered Honored Citizens and charged a bus fare of only 50 cents.

Boston's Massachusetts Bay Transportation company operates buses and trains as well as subways and light rail lines in and out of Boston and surrounds. One rail line runs from Boston to nearby Lowell MA, and the company plans to extend it all the way to Nashua. This will add to Nashua's ability to transport a growing population down the line all the way to Boston for work, entertainment, and shopping.

Nashua offers over 17,000 job listings on a consistent basis, updated constantly at Indeed.com.

The highest demand jobs in the area that are high-wage and require trained skills are in the following list, according to the Boston Labor information departments.

Job titles below listed in bold text have been in high demand since 2010, according to the local Chamber of Commerce and the US Bureau of Labor Statistics: