Eugene, Oregon - Home Of UO's A Capella Group "On The Rocks"

Hull Center for the Performing Arts

Eugene, Oregon experienced an influx of interestest when their University of Oregon men's a cappella choral group On The Rocks did well in national competition for 2010. They went on to perform an outstanding rendition of Lady Ga Ga's Bad Romanceon NBC's Sing Off. It is one of their hit numbers from the groups 5th CD Album, calledA Fifth. On the day of their Sing Off performance, the hard copy CD was already sold out and only iTunes were available.

The five-minute music video of the group and Bad Romance by Leo daSilva went viral on YouTube well before Sing Off. Many viewers state that On The Rocks performs the number better than the original artist. The three soloists on this number - Jonah Seitz, Nathan Firth, and Joshua Heying are phenomenal and the choreography a lot of fun. Others take a solo part from time to time, for example, in a rap number. They need to release a DVD along with their iTunes portfolio.

On The Rocks began in 1999 when one University of Oregon student with a passion for song met another. Eleven years later, they're famous.

On the Rocks Performs at UO

Professional Version, They Need to Release a DVD 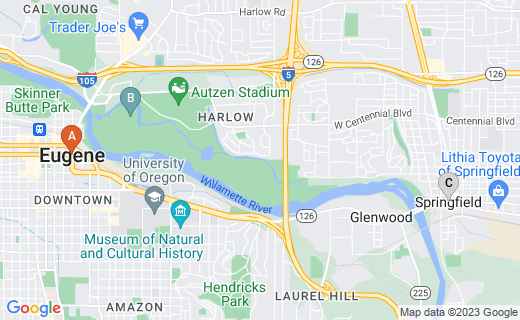 Home of the University of Oregon and On the Rocks.

Site on the Willamette River.

The Eugene - Springfield area of Oregon is home to approximately 345,000 people. The area offered some 3,600 job openings, found across all Internet listings fior this area by Indeed.com and SimplyHired.com in December 2010.

The open positions are largely in Healthcare, especially in Occupational and Physical Therapy and various levels of nursing. Healthcare positions are projected by Oregon Worksource to increase by a higher rate (26.9%) than any other sectors through 2018; and beyond to 2020. However, Sales jobs of all types have increased at a higher rate during the 18 months ending October 31, 2010 than other jobs. A portion of this may be attributable to Holiday Season hiring and the opening of Fall Quarter at UO.

Tourism is also a contributing sector to the local economy, spurred by a wide ranging arts and cultural focus in Eugene, especially in music.

Lumber and wood products have been historically consistent contributors to the Eugene-Springfield economy. Sustainability has been a major focus since the latter part of the 20th century as well, beginning farther back in the 1960s with conservation movements, and farther back in Native American/First Nations stewardship of the Pacific Northwest. .

Top Companies in Eugene and Springfield

The Volunteers in Medicine Clinic in Eugene, Oregon provides free medical and mental care to low-income adult residents of Lane Count, Oregon who have no health insurance. PH (541) 685-1800

The University of Oregon has not only 300 academic programs, but also 33 research centers and research institutes. The University celebrates champions in every facet of education as well, from academics, research, and football to On the Rocks.

The research done at UO is tremendous. Helen Neville at UO produced a DVD about how children's brains develop during elementary school years. She's connected up the processes of learning with the senses, along with the effects of emotions and music - very appropriate since On the Rocks is achieving International recognition. This is just one of the many research projects ongoing at UO that enhance the quality of life and health.

The Museum of Natural History is a popular attraction that illustrates the states many natural science wonderss and cultures through the ages. Permanent and temporary exhibits, education programs, child-friendly happenings, and tours are well attended. Archaeology has been the main highlight of related research here in the 2000s, revealing new information on human and animal cultures and migration.

Museum of Anthropology
Also at 1680 East 15th Avenue in Eugene.

This department is important to the ongoing archaeology projects at UO.

Additional Nearby Colleges and Universities