Toulouse to Carcassonne & Narbonne - The History of the Laurgais

Most people flying into Toulouse or Carcassonne will, whether they realise it or not, fly over 'The Lauragais Region'. Or if driving down the A61 from Toulouse to Carcassonne and Narbonne you will pass right through the centre of the Lauragais and you will see the signs for Castelnaudary, the capital of the Lauragais. What you may not see, unless you have the skills and gifts of a spiritualist is that this particular landscape is thick with the ghosts of days gone by.

If you could look into the past you would be able to witness the presence of the Neanderthals at Naurouze or perhaps the Romans in Renneville. You would also see the Cathars at the afore mentioned Castelnaudary, some assassins at Avignonet, barbarians at Bram, the fanatics of Fanjeaux, virgins at Villefranche and not forgetting of course the bigamists at Baziège

All of these ghosts and spectres have contributed to the

history of the Lauragais and it doesn't stop there. There were also Arians and Huguenots, but the biggest news of the region is probably the story of the Cathars and the Albigensian Crusade: never mind the castles, the Lauragais, could boast that more than fifty percent of its population was Cathar, making it the real 'Pays de Cathare'. But why should these suicidal fish-eating vegetarians have taken such a fancy to the Lauragais region? The answer to that question is one of the many topics discussed in 'The Lauragais Story', written by Hugh Nicklin as he explores the rich, deep and sometimes bloody past of this significant portion of France and the part it played in French history.

The Lauragais Axis - South of Toulouse?

The axis of the Lauragais is the long valley running between Toulouse and Narbonne on the Mediterranean coastline. An axis such as this could not fail to attract men of standing, money and power. The region was amongst some of the richest lands in the world. Grain was the mainstay of its economy for an unbelievable five thousand years. Its invaders obviously included the Romans and the Franks, but what about the English (three times!), the Magyars, the Visigoths, and the Germans all doing here?

Henry II of England murdered Thomas Becket, a well known historical fact, so how come then, did he and Becket manage to be comrades in arms outside Toulouse? Why on earth did Pope Inncoent III raise an army of crusaders to attack the Christian Lauragais? Where had the tin traders in the region come from, and where were they off to on their passage through? Goths traded in salt through the region for seven hundred years?

For two whole centuries the Lauragais was both the real and mythical 'Land of Cockaigne'. Huge fortunes were made out of the production and sale of a blue dye called 'woad'.

At about the time indigo was usurping woad and bringing production to an end in the Lauragais, up stepped France's answer to Isambard Kingdom Brunel to rescue it. He was Pierre Paul Riquet, the man who devoted his life and fortune to the construction of one of the main components of the 'Grain Machine': it was the Canal du Midi, a man-made waterway which linked the Atlantic and the Mediterranean and kept the Lauragais prosperous until the railways came. But even today the Canal Du Midi is a prized possession of the Lauragais, albeit it's main function in the 21st century is to service the tourism industry. 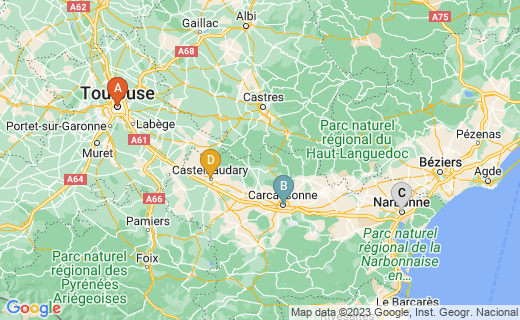 Toulouse is the most northern point of the Lauragais.

Carcassonne was the second city and fortress to fall in the Albigensian Crusade after Beziers in 1209.

Narbonne represents the most southerly tip of the Laurgais region.

Castelnaudary is the capital of the Lauragais and plays host to the Grande Bassin of the Canal du Midi.

The Lauragais Region of the South of France

Had you heard of the Lauragais in France before?

An Insight into the Author and His Views on History

For Mr Nicklin it is all about the people and what history did to them. There have been some mighty and eminent men and women that have passed through the Lauragais, including emperors, kings, Popes and saints and he shares that history with you. But he also takes care to ensure you know about the deranged fanatics, misfits and criminals that graced the region, exposing their exploits for all to see.

The Lauragais has seen disasters of epic proportions and has witnessed some wonderfully humerous events, but these do not include the events of the Nazi occupation.

This is a great book for anyone who wants to brush up on their historical knowledge by getting an idea of the History of France in general and of the Lauragais region in particular.

Hugh Nicklin studied history in Oxford, England and has travelled the world. He settled in the Languedoc Roussillon region of France as a result of being drawn by his curiosity of how the Roman empire met its demise. The rest as they say 'is history'.

If you have read it, why not rate it?

5 out of 5 stars from 1 rating of Jewels of French History Books, The Lauragais Story