A storm is a short-lived climate state with high winds, thunderstorms and heavy rainfall - usually, rain and sometimes hail or snow. Storms are associated with cyclones, which are rotating winds and strong air with a devastating ability.

Storms occur when a large condensation takes place (resulting in the production of water in liquid state and ice crystals) in an unstable section of the atmosphere.

Tropical storms are strong winds and torrential rains. Tropical storm can also generate an elevation of the sea.

Tropical cyclones are formed on large bodies of warm water and lose their intensity as soon as they move upon the earth. This is why coastal regions are generally the most affected areas by the passage of a tropical cyclone.

The Structure of a Tropical Storm

The essence of tropical storms (tropical depressions, tropical storms, hurricanes, typhoons and cyclones) are similar and the difference lies only in the place of origin.

The term cyclone refers to tropical cyclones which occur in the Indian Ocean and near Australia. These non-frontal depressions are characterized by a low center pressure without closed isobars around the center and with winds that circulate around it.

To a depression achieve the classification of tropical storm, requires the persistence of rotation around their center area of lower atmospheric pressure and that the surface wind reaches speed between 63 and 118 km / h.

Its central area, in which is centered the minimum pressure where the air is hotter than the surrounding regions, represents the structure designated by the eye of the tropical storm (that can be visible or not).

For the development of tropical cyclogenesis, also known as tropical disturbance in its early stages, we need some atmospheric and oceanic conditions. The first statement is the fact that a tropical storm does not develop spontaneously, it requires a perturbation of the surface pressure field which can be generated near the confluence of the tradewinds in the inter-tropical zone (that moves from east to west and takes the name of East Wave).

In relation to the next conditions, which must occur simultaneously, the main power source is in the oceanic waters, with temperatures equal or higher than 26.5º C.

The air over the ocean also needs to be very hot and humid, to start an upward movement, in other words, implies convergence to the surface.

As the air rises through the storm, the water vapor condenses into liquid water and every drop of water that condenses releases a certain amount of energy, known as latent heat, which is the main fuel of the storm.

On the other hand in the upper troposphere and near the tropopause, there must be anticyclonic circulation, creating divergence and facilitating upward movement and intensifying convergence to the surface. The wind speed increases.

The water vapor because it is less dense, rises rapidly when heated and goes cooling until it turns into droplets of rain. The status change releases heat which heats the surrounding air. The heated air rise and when it reaches the tropopause, there is a temperature inversion and the air is forced to go down, been reabsorbed into the mainstream.

One factor that contributes to the development of a tropical storm is the Wind Shear, ie, a factor that can give the origin and the early death. Between the surface and the upper troposphere and generally within the first 15 km, Wind Shear must present low values. The winds in altitude must be in the same direction.

In brief, simultaneous and necessary conditions for tropical cyclogenesis (tropical storm) are:

After an initial evolution, a stage of development and maturation that can last two to three weeks, the tropical storm will enter the final stage of his journey of life: born, developed and reaches the weakness. 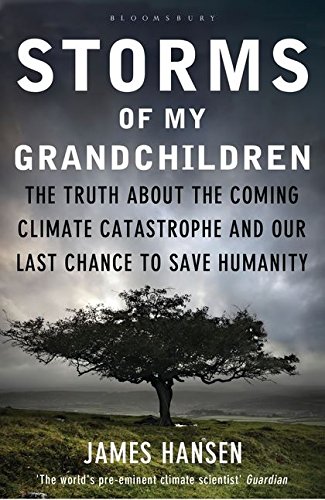 Storms Of My Grandchildren
Dr. James Hansen: the planet is hurtling to a climatic point of no return
Buy Now

What are the consequences of a tropical storm?

When the storm is announced:

The season of tropical storms and hurricanes officially begins on June 1 and ends on November 30. The majority of these events occurs in August, September and October.