US History - Hillary Clinton In Politics

From First Lady to Presidential Candidate

Hillary Clinton was one of the most politically active First Ladies in US History from 1983 - 2000 since Eleanor Roosevelt 50 years previously. Mrs. Clinton served as both Arkansas state First Lady and USA First Lady, active in law practice that benefited women and children and in social advocacy for widening health and medical care programs for an increased quality of life in America. Such interests arose during her internship with children's advocate Marian Wright Edelman:

The Children's Defense Fund's Leave No Child Behind® mission: To ensure every child a Healthy Start, a Head Start, a Fair Start, a Safe Start, and a Moral Start in life and successful passage to adulthood with the help of caring families and communities.

After leaving the White House in in 2000, Ms. Clinton entered politics as a candidate in her own right, successfully securing a US Senate seat for the State of New York. Hillary Clinton next ran for the Democratic National Convention's nominee for party candidate in the 2008 US Presidential Election. 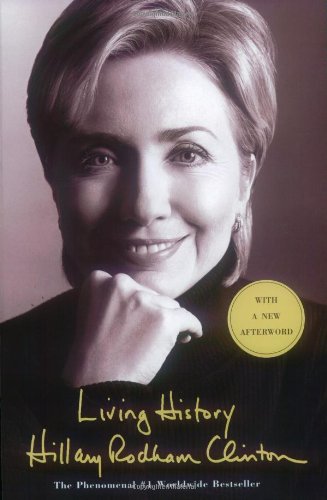 Hillary traveled the globe extensively, just as did Eleanor Roosevelt previously. Mrs. Roosevelt also continued her work following her husband's death. Mrs. Clinton wrote a weekly newspaper column called Talking It Over, which focused on her life as First Lady and her global observations of women, children, and families encountered at home and around the world.

Her 1996 book, It Takes a Village and Other Lessons Children Teach Us was an early best seller, describing global cultures in which the local community centers on families and becomes each family's larger extended family.

This style of community works together for both the individual and the common good (which some observers feel should satisfy both Republicans and Democrats), unlike some parts of American Society that are fragmented. These parts are fragmented and divided into the homeless, the severely mentally ill that do not qualify for medical assistance, the struggling single-parent household (although some are doing fine), and the family-less individuals living alone in obscurity and/or illness. For example, there were few or no visible homeless South Koreans or Nigerians outside of war or banishment for Abominable Offenses, until late 1980s America. Extended families and age-cohorts (everyone ina community within a 1-year age range) were responsible for everyone in the family or cohort, financially and in other ways. In America, the church cared for such people, but not largely after the early 20th century.

Hillary won a Grammy Award for her spoken-word recording of It Takes a Village.

This is a memoir of the life of the former US First Lady from a Midwestern upbringing to success in college and a law career, to her role in state and federal governments and world social issues uin the 21st century.

The book does not discuss deatails of the controversies of the Arkansas governorship of Bill Clinton or of the Clinton White House from 1993-2000, but it provides some behind-the-scenes details that reflect upon Hillary's reactions to and participation in certain important events, including emotional reactions. She does offer some reasons for the negative events in scandals such as Whitewater, the national healthcare issue, and some commodities trades.

Detractors state that her writing is "too readable" and/or "too simple." That might be better than if it were too complex for the majority of Americans to uinderstand. She does point to a right-wing conspiracy against the Clintons, which is not really attractive, especially to Republicans, and which may or may not have a certain degree of truth. Each must make his or her own judgment about that.

Hillary carries a sense of optimism against the tragedies of life and politics, thus making a best seller. The story leaves many readers with a sense that Hillary can handle the turmoil of not only the Oval Office, but of the world at large. It reveals an inner strength that allows a woman to forgive a wayward spouse, which the Bible states one does not need to do. To her, this choice was a higher "high road" that many of us would not take. She puts it like this - She states that she and Bill began a conversation (relationship) 30+ years ago that is anl ongoing one. This leads one to believe that Hillary could sutain ongoing dialogues with other countries, despite their misdeeds agasint America. That could be a valuable quality in an American President, if it does not result in continued and escalating abuses to the USA. One also needs to know when to get out of a relationship.

Human Rights and the Fear of Equality

Some observers thought that by supporting women and children in their right not to be starved, uneducated, abused, sexually mutilated, and murdered, that Hillary was denouncing men as people themselves with rights. This did nto appear to be the case, whoever. Other felt that she was advocating big government as the number one problem-solver. This may have been true.

The publiciity given a group of people that is maltreated can put fear into the hearts of some other groups -- fear that they will loose their own rights and power or even be placed under the power of the formerly maltreated groups. While this may reflect ancient turf battles and humans' competition for survival among themselves, it may be more about who is most important today. Some minorities have become actual, successful political groups themselves, such as the Mohawk Nation in Canada.

Supporters of global human rights concur that no group or individual should be mistreated in order to provide any other group or person with the enjoyment of an elevated quality of life or undeserved "power over." Making this belief work in practice is difficult.

Hillary ignored her decalimers and continued to support remedies to women's and children's issues globally throughout her term as US First Lady and on into the US Senate. She was elected United States Senator from New York in 2000. She became the only First Lady from 1776 - 2000 (224 years) that was elected to the US Senate and the first woman elected to a state office in New York.

The Needed Village is not the Federal Government

Sociological and anthropological studies spanning 70+ years show that the Israeli Kibbutz is one of the most overall mentally healthy environments globally in which to raise a child. The kibbutz is an extended family in which all members help in child rearing and early education so that no one adult is overburdened and so that family and national histories are spoken and remembered without the revisionist histories of outsiders (conquering cultures) forcibly overlaid. Similar groups and age-cohorts operate in the same manner in Nigeria and other parts of Africa and elsewhere. This structure includes the interrelated Circumpolar peoples, the Indigenous Peoples that live around the the top of the earth.

The incidence of serious psychological conditions - Severe Mental Disorders (SMDs) - is lower in nations having healthy extended families on average. One reason for this is the secure mother-infant bonding offered by these systems in the first 3 months of infancy, followed by communal support for a lifetime.

The theme of the book It Takes a Village speaks to these truths. However, it indivates that government programs are a likely answer to helping families in the US, but that has not proved true in the 20th oir in th 21st centuries. The village may more effectively include extended family and the religious institution of choice.

Some people in United States did not like the title It Takes a Village, because they believed it subtracted from Individualism in favor of the philosophy of The good of the many outweighs the good of the few. It was a political kind of dislike.

America's society fragmented from WWII and 1950s-onward with wartime deaths, divorce, short-term cohabitations, singles having no family, undocumented immigrants, and single-parenthood, among others. By the late 1980s, the American Psychiatric Association had estimated that up to 98% of America were negatively and significantly affected by 1) alcoholism or drugs; or 2) someone abusing substances in the family, among friends, or at work. By the first decade of the 21st century, this circumstance unfortunately grew to include physical, emotional, and other forms of abuse. The 1950s - 1960s government and corporations' admonishions to employees and citizens to trust no one and turn in one's neighbors, friend's and coworkers for Un-American activites did not help.

In the 1996 at the Republican National Convention, the nominee Bob Dole stated "...with all due respect... I am here to tell you, it does not take a village to raise a child. It takes a family to raise a child." This was partisan sentiment effective in stirring Republican crowds, but ineffective in solving the problems of American families - problems about which many are "in denial." And, families should be free to rasie their own children unless they are abusing and neglecting them, which is the law.

SMDs and dysfunctional families comprise a large proportion of the population than citizens may think. However, government programs do not help -- Families that receive public assistance have, on average, one or both childrens' guardians ( as well as some of the children) suffering from an average of 4 Severe Mental Health Disorders. Treatment provided by government programs is actually inadequate and treatment itself is often reduced or revoked as a consequence for recipients' failures to comply with program requirements, such as looking for work or doing volunteer work, etc.

All this does not mean, however, that the federal government can not help, but that it should likely not take over all family responsibilities. During Welfare Reform in the 1990s-2000s, a complete checklist on how families and their members should live daily life was produced for welfare-related programming. This was certainly overkill that did not always work.

Some analysts believe that It Takes a Village is a vehicle for promoting big government, Democrat control, and numerous government programs and subsidies aimed at social issues. If so, it is ineffective. The problems of mental illness, homelessness, drug and alcohol abuse, domestic violence, single-parent hardships, underemployment, illegal immigration, gender and age discrimination, ethnic feuds in big cities, crime, and several others have never been solved by either Democrat or Republican agendas. It Takes a Village could hopefully open a dialogue between the parties to work together if they can do so.