The Legend: This is a common story which has been incorporated into many television shows and horror movies throughout the years. As the story goes, a group of youths go through a haunted house attraction in a travelling carnival show. Hundreds of people young and old passed through the attraction everyday, but this group became a little more inquisitive. One of the members of the group took special attention to a mummy prop, claiming that the haunted house seemed 'lame' and the prop hardly looked real; until the 'mummy's' decomposing arm came off, revealing it to be a real corpse.

The Truth: This story is based on a terrifying incident which happened in 1976, while a crew was filming scenes for The Six Million Dollar Man. As they were preparing to film a scene in an amusement park in Long Beach, California, one of the crew members accidentally bumped into a 'hanging man' prop in the fun house. Just as in the legend, the 'prop's' arm fell off, and upon trying to 'repair' it, the crew discovered human bones inside.

The Life and Death Of The Man Behind The Mummy

The body was actually that of the infamous gangster Elmer McCurdy, who was killed in a shoot-out in 1911. It appears that McCurdy's scandalous reputation would cause his corpse to be forced to wait a very long time for its final rest. Very little is known about the life of McCurdy before his venture into a life a crime. Several accounts state that he had been a member of the US Army, where he learned to work with explosive materials; particularly, nitro-glycerin. He later decided to put this knowledge to a more 'profitable' use, and decided to attempt to rob banks with a gang of other criminals. It was McCurdy's job in the gang to blow up the safes in the bank, allowing the rest of the gang to grab the cash and run.

Despite his initial success, the fact remains that all crime sprees eventually must come to an end. McCurdy and some of his crew decided to rob a train in 1911, which they believed was carrying several thousand dollars in bank notes. As it turned out, the train actually was a passenger transport, and the gang only made out with about $46 and two jugs of whiskey. The authorities eventually found McCurdy hiding in a hay shed nearby with his share of the profits. After an hour-long stand-off, shots were fired, and McCurdy was killed.

The Body of Proof

After McCurdy was killed, he was taken to a local undertaker and embalmed, as was common practice. The undertaker believed he did a fantastic job of preserving the image of the renowned criminal, and propped up the body in his funeral home for people to come and view. People came from all around to see the corpse of a legendary gangster, and as part of a very strange tradition, each person who viewed the corpse left a nickel in his mouth - supposedly for good luck, and to ward away death from themselves. 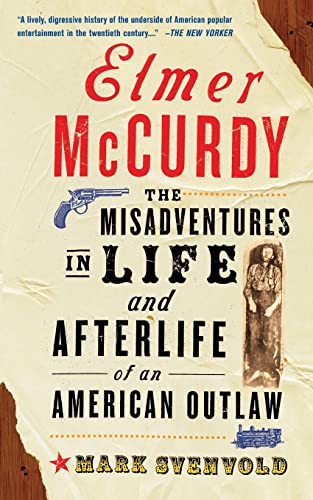 Elmer Mccurdy: The Life And Afterlife Of An American Outlaw
Buy Now

The undertaker enjoyed making his nickel profits, and kept the body for some time. That is until McCurdy's brothers came to collect the corpse of their dear departed. As records and apparently screening processes weren't widely available at that time, the undertaker turned the corpse over. These men, however, were no brothers to the deceased - in fact, they were carnival promoters. They, too, were impressed with the skill with the body had been preserved, and added the corpse as an attraction in their travelling sideshow.

Soon, the fact that the corpse was real was forgotten, whether because the promoters never revealed this information, or perhaps they just didn't care. Either way, the corpse of McCurdy traveled through carnivals and sideshows as a simple 'prop' for over 50 years before it was discovered.

Try not to remember this next time you see a convincing prop in a haunted house...