The VLA is an interferometer which means it collects data, in this case 27 antennas/dishes collect the data from the sky, and the scientists extrapolate the data into information.

Okay, the VLA is on the vast empty plains of San Agustin west of Socorro, NM. It is made up of 27 huge antennas (look like dishes) that are on tracks that go for 13 miles in a 'Y' formation.

Each of the dishes/antennas, are roughly the size of a baseball diamond (81'), weigh in at 200 tons, and dwarf an 18-wheeler semi when the semi is parked next to it. (We saw this once when we were taking company to see the VLA.) The dishes move (very slowly) on the tracks and rotate to face various areas depending on the project the scientists are working on. The scientists work with other Radio Astronomy Observatories through-out the world. There are ten of these USA antenna/dish locations in the USA from New Mexico, the Virgin Islands to Hawaii. ALL of the antennas can work in tandem to effectively create the ability of one HUGE dish/antenna the size of, well nearly the whole USA!

The newest National Radio Astronomy Observatory, ALMA, Atacama Large Millmeter/submillimeter Array is at an elevation of 16,400 feet in the Llano de Chanjantor in northern Chile. It is a cooperative endeavor.

The scientists at the VLA study cosmology, the formation of galaxies, the birth of new stars, planets, the Sun, comets, and asteroids. The higher in elevation these installations are, the less interference there is from man made radio waves (and anything else man made) that could interfere with the ability of the antennas/dishes to collect clean data.

The information is carried on fiber optics. Fiber optics can transmit all of War in Peace, many times a second. The VLA is endeavoring to upgrade the facility to be 100 times faster with more frequency and 50 times better at details.

Our community is upgrading a traffic intersection to include stop lights that use fiber optics. Fiber optics are a nice neighborhood upgrade. They provide quality media service to homes and businesses. I would like faster Internet as provided by fiber optics.

Remember this is radio astronomy. Radio astronomy began in 1932 at Bell Labs. Karl Jansky, physicist, detected cosmic noise from the center of the Milky Way Galaxy while looking into sound disturbances on the transoceanic telephone service.

The National Radio Astronomy Observatory (NRAO) started in 1956. No one university or college could afford to maintain such a facility of equipment individually. The NRAO has grown to be a premier astronomical observatory through-out the world.

Here is the web site for more information directly from the scientists. On Saturdays there are tours usually conducted by interns. These ladies and gentlemen are very excited and pleased to be there and give excellent tours. They are even tolerant of the most basic and uninformed questions, I know, because that is what I can ask.

Now, if all of this looks vaguely familiar, and you wonder why, it is because the VLA has been filmed by various media.

The Visitor's Center has a great introductory film, a nice but small museum with a great deal of information, and a walking path within the facility. The center is open until sunset most days. Do check the web site for any updates on the hours.

Oh, in keeping with the theme, there is a great smashed-home-made-hamburger diner in the town of Magadalena just to the east of the VLA. Do be aware that such places in small little towns like this are only open limited hours. This one closes in the afternoon and re-opens for an evening meal.

You will get a New Mexico Green Chilé Hamburger, won't you?

VLA is worth the drive 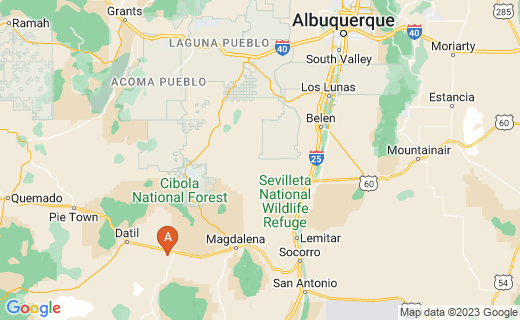