Vampire myths go back thousands of years and occur in almost every culture around the world. Their variety is almost endless; from red eyed monsters with green or pink hair in China to the Greek Lamia which has the upper body of a woman and the lower body of a winged serpent.

Many of the myths traveled with nomadic tribes and tradesmen. The lore has changed throughout time from body snatching and sould stealing to blood sucking creatures. For the most part, these vampires are to be immortal with a few handicaps- holy water, garlic, and crucifixes.

The richest of the vampire myths are those of Romania.

The Slavic people ranged from eat Europe to Russia, Bulgaria, Serbia to Poland. The Slavs came from north of the Black Sea and were closely associated with the Iranians. Prior to the 8th century, they migrated north and west to where they are currently located. But, through the 9th and 10th centuries, the Eastern Orthodox Church and the western Roman Church were struggling over supremacy. They formally broke in 1054 A.D. with the Bulgarians, Russians, and Serbians, remaining Orthodox, while the Poles, Czechs, and Croations went Roman. The split caused a big difference with the development of vampire lore. The Roman Church believed that in-corrupt bodies were saints, while the Orthodox Church believed they were the vampires. 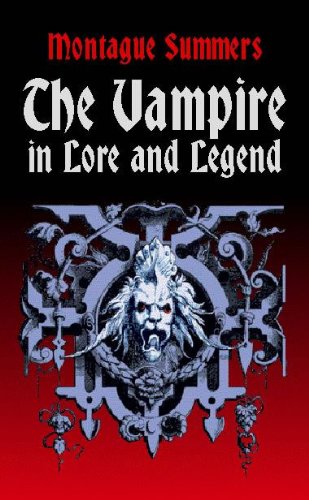 The Vampire in Lore and Legend (Dover Occult)
Buy Now

Romania is surrounded by Slavic countries, so it isn't surprising that their vampires are nothing more than variants of the Slavic vampires. The Romanian vampires are called Strigoi based on the Roman term "strix" for screech owl, which also came to mean demon or witch. There are different types of strigoi to include the strigoi vii (live witches who become vampires after death).

In addition to the Slavic myths, Romanian vampires exhibit the following:

Early vampires, are those who appeared about 4,000 years ago in ancient Assyria and Babylonia. The most feared of these vampires included Lamastu. She was a vicious demon goddess who preyed on humans. In Assyrian legend, Lamastu would creep into a house at night and steal or kill babies, either in their cribs or in the womb. Lamastu would, also, prey on adults, bringing disease, sterility, and nightmares. She would, also, suck the blood from you men. Lamastu is often depicted with wings and bird like talons, sometimes with the head of a lion. Pregnant women could wear amulets depicting Pazuz, another evil god who once defeated the goddess, to protect themselves and their unborn babies.

The Greeks feared Lamia, a demoness with the head and torso of a woman and the lower body of a snake. Lamia was one of Zeus' mortal lovers, who Hera made so insane that she would eat all her children. She became so insane that she became immortal, sucking the blood from young children our of jealousy for their mothers.

Later vampires, those with records dating back hundreds of years. These vampires all have traits and characteristics, but are either demon or spirit. Demons are those that reanimate corpses so they could walk among the living, whereas spirits of the dead would not leave their own body.

The most notable demon vampires were the Russian Upir and the Greek Vrykolakas. In these traditions, sinners, unbabtized babies, and other people outside the Christian faith wer more likely to be reanimated after death. In many cases, the undead corpses had to return to their grave regularly to rest.

The vampires in Moldavia, Wallachia, and Transylvania were commonly called strigoi (plural). Strigoi were almost exclusively human spirits who had returned from the dead. Unlike the Upir or Vrykolakas, the strigoi would pass through different stages after rising from the grave. They would return to their family, steal cattle, beg for food, and bring disease.

Modern vampires are not the average blood sucking creatures of the past. Instead, they are those who are infamous in their world for their deaths and murders. The two most known of the modern vampires are Vlad Tepes and Countess Elizabeth Bathory.

Vlad III earned the name "Tepes" because the word means impaler, and he was known far and wide for impaling his victims on stakes, then displayiing them publicly to frighten his enemies and to warn would-be transgressors of his strict moral code. He is credited for killing between 40,000 - 100,000 people.

The name "Dracula" originates with a secret fraternal order of knights, "The Order of the Dragon," which upheld Christianity and defended the Empire against the Ottoman Turks. Vlad's father was admitted to the order around 1431 because of his bravery in fighting the Turks. The word for dragon in Romanian is 'drac' and 'ul' is the article, and where his father was Vlad Dracul, Vlad III became known as Vlad Dracula, as '-ulea' means 'the son of.'

Throughout his life, Vlad was known and thought of as evil. He has harsh punishment techniques. He is now known for his inhumane cruelty, as impalement was his preferred method of torture and execution. He usually forced the bodies on an oiled stake, which was not too sharp or the victim would die too rapidly. He impaled his victims through body orifices, the abdomen, or the chest.

The various stakes were placed in geometric patterns, which became known as the "Forest of the Impaled."

One day, a servant girl was brushing the Countess' hair; she pulled or or remoarked that something was wrong, which infuriated the Countess, who slapped the girl so hard that her nose bled. Some of the blood fell on the Countess' skin, to which she observed that the skin had lost is age. To which she decided that the blood of young girls would help her retain a youthful appearance.

With the help of her former nurse, Ilona Joo, Tharka, the witches (Dorottya, Szentes, Darvulia), and the dwarf majordoma Johannes Ujvary, Elizabeth was able to capture her buxom servant girls, taking them to an underground room, and subjecting them to the worst cruelties she could devise. If the girls refused, Elizabeth used branding irons, molten wax, or knives to shed their blood.

Elizabeth murdered far fewer than Vlad, but her murders totaled around the 600 area. She would torture the girls, sometimes for weeks before they were killed. She preferred to hang the bodies from the ceiling, and experience a "blood shower," using iron maidons, cyndrical cages, and and variation thereof.

Virgin peasants from neighboring villages were brought to the Countess on the pretext of being hired. But, once Elizabeth decided that royal blood was much better, suspicions rose higher.

Upon finding the bodies of the girls in her basement, she was given two trials, which the Countess was never convicted.

Vampires have been given different appearances, traits, and characteristics. Books have been written about their lore, as well as fictional stories written based on the myths. Movies have been produced, as well. The most famous story is that from Bram Stoker. The novel, Dracula, has sold millions of copies throughout its career. The book's plot has been introduced into several movies, to include "Dracula." Anne Rice has written the "Vampire Chronicles" which includes Queen of the Damned and Interview with the Vampire, which have both been made into movies. Elizabeth Kostova, has written a magnificent novel, The Historian, to which a young girl travels through Europe in search for her father, who still believes the Vlad Tepes is still living. Nancy A. Collins, has written a Sonja Blue Collection, consisting of several books about a vampire's life.

Vampires can be found on television series as well. "Buffy the Vampire Slayer," is a well known exmple.

Vampires are apart of our history, and will continue to shed some mystery over the books we read and the movies we watch.