New Zealand is a small country with a high earthquake risk - well not so much a risk as a certainty. Perhaps fortunately early Wellington settlement was highly disrupted by major earthquakes - particularly the 1848 Marlborough quake, which with a magnitude of around 7.1 destroyed nearly every building in the new settlement of Wellington.  A few years later in 1855 the city was shaken by a far more powerful quake on the East Wararapa fault line - which may have been as strong as 8.3. This time there were only minimal fatalities and most of the buildings survived - as they had been rebuilt in wood. This quake raised the seabed in places up to 2 metres and was partly responsible for the settlement moving from its original Petone foreshore location to Lambton Harbour - Wellington's current CBD.

The result of that earthquake had huge implications for the town planning and architecture of Wellington. First it resulted in significant flat land which became today's CBD, international airport. In addition the evidence of how poorly brick buildings survived in a quake saw Wellington rebuilt in wood. In the 1855 earthquake the only buildings entirely destroyed were those built in brick - Wellington learned its lesson and it was only in the 1980's that brick houses were again commonly seen as a preferred building material. Even today most of Wellington's new homes are built in wood.

The last major earthquake in Wellington was 1942 - the city is well overdue a big shake (which will probably be over 7.0 magnitude and centred on the West Wairarapa fault again). The problem is - what to do if you live in Wellington. Well as a geologist I do know a few tricks.

Houses That Will Not Survive The Next Earthquake

Statistically we spend more time in our home (usually asleep) than anywhere else. If your house doesn't collapse you have a great chance at earthquake survival. The following are the types of Wellington homes I wouldn't want to be caught in an earthquake.

As seen in the 2010 Christchurch earthquake New Zealand has some of the best earthquake standards in the world. Compared to the Haiti earthquake (which was comparable in strength and depth) the lack of serious building damaged is incredible. But more significant - the main buildings that were destroyed were older, not reinforced brick buildings.

Wellington doesn't have too many of those (thanks to the 19th century earthquakes) - but there are still some older buildings - mainly in the CBD. Some of those buildings used to be commercial - but are now residential. Why? Well partly because the developers could make better money with apartments - but also because the engineering standards for a residential building were lower (therefore cheaper) than for a commercial building. If you don't believe me - check the body corporate details and see how high the building's insurance is…

Wellington loves it houses hanging off the cliff - it makes for a great view. I am sure there are lots of engineering standards associated with pole houses - but personally I prefer my houses attached to foundations which are attached to bedrock

Any House in Petone

Petone has two problems - its right in the path of the potential Tsunami and its built on river gravels. The chance of liquefaction and subsidence is high - which will make fleeing the Tsunami more difficult and dangerous.

Zealandia is now a tourism attraction - a land island of native plants and animals around the old Karori reservoir. That reservoir stopped being used because the old concrete wall of the dam is not built to the current earthquake code. It should have been taken down - instead it was "conserved" (never strengthened). Avoid living downstream from the flood waters, which will probably make Karori tunnel impassible too.

Tsunamis are actually pretty easy to survive. First you should know whether you live in a Tsunami area: if you are in the CBD or a hill suburb you have no risk. If you live on the southern coast - you have a risk. What to do in that case - get to high ground. Don't drive, or stop for the family photo albums, most definitely not wait to be told what to do. Just climb the nearest hill - you may have under 10 minutes, but you only need to get about 50 metres up.

Where you live and work matters. Much of Wellington is on reclaimed land - this will be a problem in an Earthquake - every building on the seaside of Lambton Quay has a pump in the basement - so if there is a power cut there is problem, never mind if there is an earthquake. There was a lot of debate when Te Papa - the National Museum was built on waterfront reclaimed land - if you are caught inside it in a quake you are pretty safe - is highly over-engineered. But if you live in the apartment block across the road - also on reclaimed land …

The best place to be in an earthquake is bedrock - tops of hills are good places to be because they will have the least movement. Watch out for areas built below water reservoirs and tanks though. 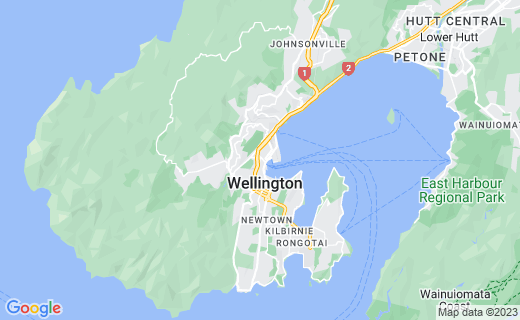 The standard information from Civil Defence is that you should be prepared to look after yourself for three days. Frankly most of us would have that much food lying around anyway. Even if the power is off most food is unlikely to spoil in less than a week unless Wellington is having a warm summer (significantly less likely than a major earthquake). The reality is that Wellington could be isolated for weeks. Even getting the army in would be very, very difficult.

Wellington only has two roads out of town - both run along fault lines - both included elevated road ways and both will be impassible. New Zealand doesn't have much of a navy anymore so we may quite possibly have to wait for the Australians to send a frigate to park in the harbour to provide personnel, heavy equipment and medical facilities.

The shiny new hospital in Newtown - its on gravel, on a fault line and has really poor access even during rush hour.

The airport is vulnerable to earth movement - its all on reclaimed land and Tsunami.

When it happens you are going to have to wait a while - or be prepared (and fit enough) to walk a 100km or so north to get out of town.

Personally I will be packing up my laptop (assuming it didn't fall of the desk and break) putting on my tramping gear and good pair of boots and heading up to Palmerston North - but its going to take me a while to walk and hitch it.

One of the local MPs appears to have done something useful and has released a list of buildings which are listed as being of not up to EQ standard. The jargon used means EQP - presumably means a building that may not be to standard and 124 served - which means the owner has been formally notified that they need to bring the building up to standard (if you are buying this should show up on a LIM report too)

More Earthquake Articles by this Author