Andrew is well read in history, having studied history at University in England. He has been on writing online for many years.

What is the Role of the Royal Mint?

The Royal Mint of the United Kingdom is the sole body permitted to manufacture, or mint coins as legal tender in the United Kingdom. The Royal Mint originated in the middle of the ninth century and it originally operated within the grounds of the Tower of London. In the last century, the Royal Mint has seen many upheavals and changes. It is now situated outside of the capital and it now runs like an everyday business out in an industrial park.

The Royal Mint is owned and operated solely by the treasury of the UK Government. There had been talk of privatizing this state run company, but there seems to be little appetite to do so by the public. The thought of a private company having control of the nation's money does not sit well with most people.

The Royal Mint of the United Kingdom's primary role is supplying legal tender in the form of coinage and promissory notes. The Royal Mint also forges medals for the armed services and royal awards which honour those who make a sterling commitment to the country. The Royal Mint also manufactures bullion such as silver, platinum and gold. These are often traded on markets and they come in various weights.

The Royal Mint Offers Services to the World

The Royal Mint exists principally to mint coins for circulation in the United Kingdom and its oversea territories. However, it also manufactures and circulates coins for over one hundred other countries.

Many former colonies of the British Empire had their coins minted in the United Kingdom. Eventually many of the larger nations developed their own minting operations and many newly independent countries wished to severe many colonial ties with the British Royal Mint.

Canada's treasury minting service was originally set up by their British colleagues in the early twentieth century. After the Dominion of Canada ended, the newly independent Canadian government brought the minting of currency fully under the control of their own treasury.

The Previous Home of The Royal Mint 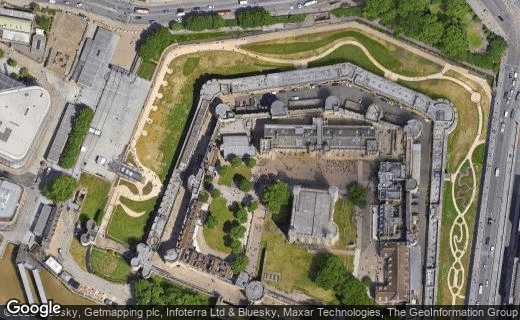 Relocation of the Royal Mint to Wales

The Royal Mint moved to its current location in Wales from its original site at Tower Hill in London. The new site has taken a lot of the history with it. It currently holds an extensive collection of coins dating from the 16th century on-wards. The Royal Mint's Llantrisant site occupies nearly forty acres of land and it employs over seventy workers.

The pressing of coins has changed a lot since the Royal Mint stroke its first coin in the dark ages. Today the British Royal Mint is a much more industrialized institution, and the numbers of coins it produces would stagger those who were entrusted with the minting of coins of the realm under the Anglo-Saxons.

The new site is a fully industrialized unit and is able to comfortably handle large orders from both home and abroad. With the move away from its original site. The Royal Mint is able to expand without disturbing the precious history of its former environment. The new site is also fully compliant with building and fire codes, this is due to its more recent construction. It would have been impossible to continue producing coins in the original site as it was already becoming a logistical nightmare after the Second World War.

The Royal Mint is responsible for our legal currency and makes sure that enough legal tender is in circulation by liaising with many external institutions. Alongside its obligations to create legal tender, the Royal Mint also produces.....

The creation of commemorative coins is of great interest to coin collectors as some of these collections hold a great value physically by the high pedigree of the precious metals used and some collections are very valuable due to the limited number of sets produced.

Any errors on the legal tender or the commemorative coins can make the coins very valuable to collectors. Because of the Royal Mint's high reputation for excellence any mistakes on one of their coins can send its minted value through the roof. The last two occasions were in 2009 when a batch of 20 pence coins had no date stamped on them. Prior to that error, the last major minting error would have back in the reign of King Charles II.