Where We're Going, Where We've Been: A Theory of Evolutionary Psychology

Jennifer has worked in the human services field since 2009 and will be completing her Masters degree in Forensic Psychology in September.

Since the subject of Evolutionary Psychology is one that cannot be avoided, it has been decided that an addition to the previous investigation, titled "Where We Came From, And Why It's Not As Far Away As We Think", was in order. But instead of generalizations, I seek to provide further insight into the human being's little nuances- the quirks that define the homo sapien and set him apart from the rest of the animal kingdom.

Yes, we as people can still be considered animals in many more ways that most people perceive. Our evolutionary journey has ingrained behaviors and thoughts deeply in our collective subconscious, and one some very specialized occasions they resurface to wreak havoc on our social lives. But with a little vision, a lot of research and a touch of understanding, it is possible to explain our present selves by embracing the ways and patterns of our ancestors.

The Scent of a Woman (and Man)

A pheromone is defined as a secreted or excreted chemical designed to invoke a reaction in members of the same species as the organism emitting the pheromone. These chemicals are a means of invisible communication- their release signifies fear, sexual attraction, and even the location of a viable food source. Pheromones are emitted unconsciously, and are essential in delivering "messages" to the other species members. For example, aggregation pheromones are released in the presence of a predator to alert all members to the possibility of danger. In some species, these particular types of hormones serve a dual purpose- to warn species members, and to deter predators from attacking. Each member of a species is able to recognize the presence of the pheromone, even in lieu of a thought process. It is quite simply an invisible communicator, and one that our brains have been primed to understand without requiring deep or active comprehension.

In human beings, the most presumably powerful pheromone is the one responsible for fanning the flames of sexual attraction. During a woman's menstrual cycle, certain pheromones are released that call to to a man's desire for a fertile woman. These hormonal signals are released without either party's knowledge; this may also serve as an explanation for why some men find pregnant women to be especially attractive. Kind in mind that while our ancestors were not as technologically advanced as we are now, a woman's fertility was considered a primary factor in determining whether or not she was mated with.

Pheromones also play a role in attraction itself. Theoretically, our hormones are attracted to another's who complements us; our brains are capable of determining who possesses the greatest desirability for us as individuals. An example of this might occur when one woman finds a man attractive based on his smell whereas her female friend might not. Each brain is wired differently based on our human instincts; to the attracted woman, the man might have the added bonus of being physically attractive as well as smelling good. But to that woman's friend, the man's scent may be offensive, subconsciously reminding her of poor hygiene or of being unkempt.

There have been several occasions where I have been physically attracted to a man only after smelling him. In layman's terms, his scent compensated for me not finding him physicality attractive and pleased my reptilian brain. Both men and women should be careful of the odors they are emitting- harsh scents such as cigarette smoke or heavy, musky perfume are oftentimes deal-breakers.

I want to know what the difference between the essence of a man and woman is.

When Men Are Sick...

...the world is ending. Believe me, I know. And back in the prehistoric times of man's early days, it was true.

As we have previously discussed, men were the primary assets within any group or tribal structures that existed. They protected their fellow male members, the women, and the children against danger and/or the presence of predators. Prehistoric men were physically stronger, faster, and generally better fighters than their female counterparts, who tended to be better suited to nurturing wounds and raising children. The women were typically left behind during hunts for food, and sheltered during attacks along with their children.

If a man perished during these times, the fate of the group he had previously belonged to was in perilous balance. His fellow members would have lost a protector and a hunter, and each member of the group was responsible for some aspect of living that contributed to the overall wellness of the tribe. Heaven forbid that the man who died was the leader of the hunt, or charged with the responsibility of finding stable food sources.

So in essence, the world does die a little bit when a man gets sick. It appears as though the correlation between illness and helplessness is ingrained into their subconscious (think "If I am sick, then I cannot provide"). And women- symbols of the strong and comforting- are usually right there beside them when this happens, spoon-feeding them soup, helping them return to being fighting-fit.

The Coming of Religion

Contrary to its name, evolutionary psychology does provide a somewhat controversial explanation of the origins of religion- how it was created, and for what purpose.

As time progressed, man became smarter. Not in an informational sense, but rather a logical one. Objects and other things began to possess meaning. The behaviors and movements of animals became observable. Man becomes curious about who he is and what he's doing on earth. Man begins to wonder about the possibilities.

Obviously, the evolutionary approach does not support the theories of creation exclusive to several world religions. However, it does explain the gradual process that a new system of beliefs must undergo in order to take hold in more than one individual. Religious meanings must be applied to certain occurrences and objects and, eventually, people.

To many developmental psychologists, the gradual development of religious systems signifies the homo sapien's ascent into greater intellectual understanding. Religious thought and practice requires the ability for higher thinking to occur; followers must be able to comprehend certain religious concepts that are difficult and complicated, oftentimes consisting of multiple figures and happenings. Followers must also maintain belief even the face of intangible information- one must believe in another who he or she cannot physically see or touch.

So even if you aren't a fan of evolution, the fact that religion requires the capacity for higher thinking is really good news.

Groups of people are oftentimes inefficient at completing tasks without the presence of a leader, even in this modern age. This need appears to stem from the presence of a tribal leader as man progressed through time. The concept of "leader" referred to an individual who provided the members of the group with tasks to accomplish, advice, and opportunities to learn additional skills that would increase their value within the tribal structure.

Keeping Up With the Smith's

As a once entirely primitive organism, man has brought on the advent of what one day might be his very undoing: technology.

Let's think about the types of stimulation that were available to primitive man (and still are to those primitive tribes still in existence): hunting, courtship, sex, and family. Up until very recently, these concepts were considered to be the most important realities in every individual's life; that is, until technology made it through the development stage and cannon-balled itself into our otherwise tranquil ways of living.

This isn't to say that technology has ruined everything, or that is has no benefit. Technology has enabled to live longer, fuller lives. It has provided us with the basis of modern medicine, society, and politics. The coming of technology was the next logical step in man's developmental process and, no matter which way evolution continued to drift, man ended up exactly where he was always meant to be.

But even with this acknowledgement, technology has assumed the responsibility of providing modern man with stimulation. We are constantly on our cell phones, computers, and any other device with a screen that holds our attention. This new type of visual, audio, and sometimes social stimulation has replaced our need of face-to-face interactions, relationships, and many other things that were once considered sacred.

This gradual yet systematic process illustrates man's evolution from primitive stimulation to technological marvel. From the first traces of the internet in 1958 to the invention of the iPad in 2012, man has evolved from a simple primitive beast to a debonair primitive beast with a phone is his hand and a Bluetooth in his ear.

Why? Human beings require stimulation in order to develop. This concept is highly observable in children and can be further viewed in children who have originated from orphanages. Not receiving stimulation in early childhood can lead to social, mental, emotional, physical, and behavioral concerns in later life. And so great emphasis is placed on the presence of stimulation and how one might interact with it. At one point, man was content with his family members remaining strong and healthy, the prospect of having sexual relations with his wife, and maintaining his ways of life. Now, some of these things aren't as important as keeping up with the Smith's. In fact, in most ways technology has staved our need to seek active stimulation by replacing our thirst with easily accessible devices and machines.

Some researchers have argued that the primitive man that resides in each of us rebels against technology. Our addictions, our urges, our interests stem from this basic need to be stimulated. Drugs, gambling, alcohol, sexual fetishes, and many others have been considered still existent because of our ancient desires for cerebral entertainment.

What's Next for the Future?

It will be interesting to see how man and woman continue to progress in today's society, bombarded by technology, the over-stimulation of the senses, and strained social interactions. Perhaps the process of evolution will leave human beings behind in its wake as it seeks other more engaging organisms to visit. But for now, our primitive selves are still very much intact, waiting for the most awkward times to reemerge. 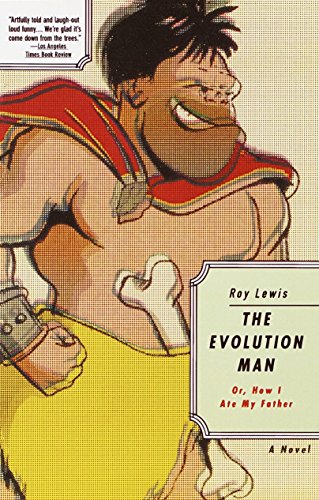 Evolution Man: Or, How I Ate My Father
Buy Now