It's a question that is frequently asked. Why do women shave? Or even, why do some women choose not to shave? I've done some research on this question and the answers may intrigue you. First, I'd like to introduce a woman, Christine Hope, who has researched the topic in great detail. She has written the main article regarding this topic and has provided a concise history of why women shave their bodies.

Before the early 1900s U.S. women shaved what people could see (primarily unwanted facial hair). World War I marked a time when marketing for products became more popular and so did fashion. New dress styles were being introduced, such as sleeveless dresses. Christine Hope points out in her article Caucasian Female Body Hair and American Culture , that a new add in the magazine Harper's Bazaar , stated that in order to wear this new "modern" dress they must shave their "underarms." This word, underarms, was then coined and made use of in hundreds of different adds for razors, and women around the world were told to shave, not only for hygiene reasons, but to also remain trendy.Hope referred to these advertisements as the Great Underarm Campaign . By 1917, most marketing firms didn't feel the need to explain why women should shave anymore, instead they used their advertisement spaces to display new styles of dresses- and by the early 1920s razors were being sold in major stores all across the United States.

At this time in history, there wasn't a real need for women to shave their legs (after all, we have all heard the stories of how our mothers and grandmothers didn't wear pants until the 1960s). However, another set of advertisements appeared in the 1940s; again for fashion. The dresses were shorter and so were the bathing suits, and again the cycle continued. For the most part advertisements did not need to spell it out for their readers like before. Companies were developing better razors (from what I understand it was somewhat painful to shave in the early 1900s) and the idea of smooth skin enticed most readers. Advertisements also started appearing for cream and waxing kits as well.

We all know that in today's society there are millions of different products that will assist you in getting rid of unwanted body hair. There are websites that will help you teach your children how to shave for the first time. There are also plenty of women that take a stance against the removal of hair and feel like its unnecessary and degrading that women feel the need to change what nature has given them. Whatever your stance may be, you have all asked yourselves this question before-- and now you know the answer. 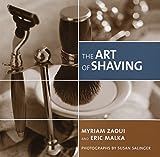 The Art of Shaving
Buy Now