The Winnebago War was limited to a few attacks on American civilians by only part of the Winnebago (Ho-Chunk) tribe. It was brief and took place in 1827 in the Upper Mississippi River region primarily in what is now the state of Wisconsin in the United States. The cause was the wave of lead miners trespassing on their lands and false rumors that the United States had sent two Winnebago prisoners to a rival tribe for execution. Indians had been mining lead there for thousands of years and exporting lead was an important part of the Winnebago economy.

The majority of the Indians in the region did not join the uprising; a show of military force by the United States ended it. Tribal chiefs surrendered eight men who were participants. One of these was Red Bird who American officials considered to be the leader of the uprising.

The Winnebago tribe had to surrender   the lead mining region to the United States. The American military presence increased on the frontier, Fort Winnebago was built and two abandoned forts were reoccupied.

Some officials concluded that Indians and whites could not live peaceably together and supported the policy that became known as Indian removal.

The Black Hawk War came in 1832 and many similar issues and many of the same people were involved.

Murder of the Methode family

The Methode family consisted of a French-Canadian man, his Indian wife and children They were gathering maple syrup about twelve miles north of Prairie du Chien in present day Wisconsin. They were killed, it appears, by a Winnebago raiding party. The killers had no apparent grievance with the family. Two suspects were arrested by Prairie du Chien militia and taken to Fort Crawford. They escaped and U.S. army Lieutenant Colonel Wiloughby Morgan took two Winnebago hostages and demanded the tribe turn over the killers.

The Winnebago brought six men to Morgan at Fort Crawford on July 4, 1826. These men were not guilty or involved in the murders but were surrendered to appease American anger and prevent punishment of the tribe. This was in accordance with tribal custom. When Colonel Morgan couldn’t determine who was guilty, he detained all the men and demanded the chiefs identify the killers. Commander of the 5th Infantry regiment, Colonel Josiah Snelling reinforced the fort. The Winnebag  are native to Wisconsin and Illinois. The tribes themselves prefer to be called Ho-Chunk. The federal government recognizes two Ho-Chunk tribes: The Ho-Chunk Nation of Wisconsin and the Winnebago Tribe of Nebraska.

Believing that the Winnebago prisoners had been executed, in June of 1827 Red Bird, a Winnebago leader, and Wekau (The Sun) and Chickhonsic (Little Buffalo) sought revenge at Prairie du Chien. Not able to find their intended victim they targeted the cabin of Registre Gagnier, the son of an esteemed African –American nurse and mid-wife by the name of Aunt Mary Ann. The three Indians were welcomed into the home for a meal.

Reports varied as to what happened next.

Red Bird and his companions returned to their village with three scalps and a celebration was held.

About 150 Winnebagos along with a few Dakota allies attacked two American keelboats on June 30, 1827. It was on the Mississippi River near the mouth of the Bad-Ax River. Two Americans were killed and four wounded in the skirmish. The Winnebagos suffered about seven casualties directly in the attack or from wounds suffered in the attack.

Wikipedia quotes historian Patrick Jung as saying the incident was important because it was the first act of war against the United States by Indians in the region since the War of 1812.

The Prairie La Cross Winnebago hoped to find allies among the Dakotas, Potawatomi as well as other Winnebago groups. However, while most leaders of the other tribes were sympathetic to the grievances, they preferred neutrality. There was some killing of American livestock but some Potawatomis leaders such as Billy Caldwell, Alexander Robinson, and Shaubena visited the Potawatomi settlements and entreated them to remain out of the war, a stand they would later take in regard to the Black Hawk War. Many Winnebago stayed distant from Red Bird and the Prairie La Cross Winnebago actions. Red Bird had a hopeless task without allies

The American population feared that a wider Indian war would come. Many fled to towns, Galena and Chicago for some. Others went to the abandoned Fort Crawford. The governors of the Michigan Territory, Lewis Cass, along with the Superintendent of Indian Affairs were near Green Bay (now Wisconsin) hosting a treaty conference when news of the attacks reached them. Cass, in order to discourage any spreading of the uprising invited Native Americans in the region for food and gifts at the treaty grounds. Over 2000 eventually came. McKenny warned that the only way to avoid a military invasion by Americans was to surrender those responsible for the attack.

American officials met with native leaders and urged them to stay out of the war. Meanwhile officials mobilized American troops.

On August 29, Atkinson’s force started moving up the Wisconsin River toward Portage, Wisconsin where the hostel Winnebago’s were concentrated. Whistler’s men came to the same place from the north.

Waukon Decorah and Carymaunce, two Winnebago leaders, surrendered Red Bird and Wakau to the Americans. At the request of Carymaunce the Americans refrained from putting irons on Red Bird and Wakau. He also made an offer of twenty horses for the return of the prisoners but was refused. Four more men who were involved in the uprising were turned in during the next weeks.

At the close of the war, general Atkinson promised that the U.S. Government would investigate the grievances in the lead mining region. Thomas McKenney requested military aid to evict the American miners who were trespassing on the Winnebago land. However, after the war even more settlers came into the area and the American officials were either unable or unwilling to stop them. By the beginning of 1828 as many as 10,000 illegal settlers occupying Winnebago land. One of these was general Henry Dodge who started a mining camp after the war and bragged that the army could not make him leave.

The Indians didn’t have much choice but to sign a provisional treaty agreeing to sell theland to the United States.

Eight Winnebago were held at Fort Crawford for trial. The Americans most wanted to convict red bird as they thought he was the leader of the uprising. Wikipedia cites historian Martin Zanger as believing that Americans failed to understand that   Winnebago society was rather decentralized.

Treaties were signed 1n 1829 at Prairie du Chien The Winnebago and the Three Fires Confederacy formally ceded the land to the United States for   payments of $16,000 and $18,000 annually.

Fort Winnebago was a 19th Century United States Army Fort between the Fox and Wisconsin Rivers in what is now Portage county, Wisconsin as part of a chain of forts that included Fort Howard in Green Bay, Wisconsin and Fort Crawford in Prairie du Chien, Wisconsin. The fort was built in 1828 as an element in maintaining peace between white settlers and the Native Tribes after the Winnebago War in 1827.

The location of the fort was chosen for its nearness to where Red Bird surrendered in the Winnebago War and because Portage, Wisconsin has strategic importance. It was the site of an important portage on the fox-Wisconsin waterway between the Great Lakes and the Mississippi River. The location allowed the fort to regulate traffic between the two locations.

The fort was abandoned in 1845 and sold into private hands later. In 1856 it was destroyed by fire.

The Fort Winnebago Surgeons Quarters remain as a museum operated by the Daughters of the American Revolution. 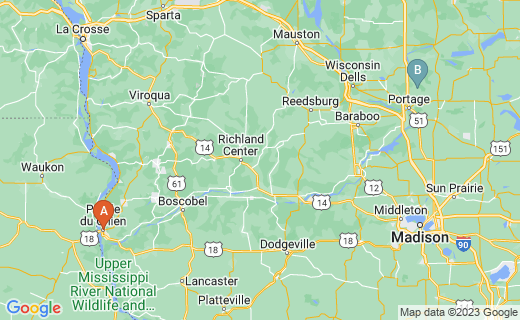