Drought in winter in the Canary Islands

Here in Tenerife in the Canary Islands the late autumn and winter is the rainy season. It is when Mt Teide gets snow on its peak, often for several months, but not this time!

Tenerife can expect heavy rainfall and thunderstorms that fall as snow on very high ground from late October through into March of the following year but this has not happened. Already the scrub-land vegetation high on Mt Teide is dying or dead. At lower levels on the island, the prickly pear cacti are shrivelling up and wilting in the ongoing heat and lack of rain. When cacti are experiencing problems from lack of water something is seriously going wrong!

According to a report dated October 27, 2011, by the National Oceanic and Atmospheric Administration (NOAA), Climate Change is probably responsible for winter droughts which are currently affecting areas around the Mediterranean. The reports states: "Wintertime droughts are increasingly common in the Mediterranean region, and human-caused climate change is partly responsible, according to a new analysis by NOAA scientists and colleagues at the Cooperative Institute for Research in Environmental Sciences (CIRES)."

The countries bordering the Mediterranean Sea also normally receive their heaviest rainfall in the autumn and winter, just like Tenerife and the Canary Islands normally do. A severe shortage of water at this time can only spell disaster for farmers faced with drought restrictions and no way of watering their crops.

In Tenerife there have been occasions when there has been a shortage of rainfall in October, November and/or December, and other times when January has had little rain but it is very rare indeed for there to be a shortage of precipitation in both parts of the autumn and winter seasons.

Are you affected by drought?

Are you affected by drought were you live?

Tenerife's Mt Teide is the highest mountain in all of Spain because the Canary Islands are Spanish. It is usually attractively covered in gleaming white snow on its peak and slopes from November onward and sometimes the snow is still on the highest parts as late as May. Often it is possible to spend a White Christmas on the island, at least up on the mountain, but not this time around.

The rainfall that fell last autumn was not enough to help the plants that grow there to recover from the usual summer dry spell and many are now dying or dead. Shrubs are tinder dry and crumble to dust. This really is a serious problem!

Several very rare species of endemic wild flower grow up on the higher levels of Mt Teide and these plants that are already endangered are sure to be in even worse trouble from the winter drought. The Teide Violet (Viola cheiranthifolia) grows in the volcanic rubble right up on the summit of Teide and this is the only place in the world where it is found. Another very rare and very attractive plant is the Red Viper's Bugloss (Echium wildpretii), or Tajinaste rojo as it is known in Spanish. In the flowering season, with its tall flowering spikes of red blooms it is one of the attractions of Mt Teide, and again it is only found at this location.

Below the higher levels of Mt Teide are pine forests and cloud forests made up of laurels and other evergreens but even the usual "sea of clouds" that keeps these areas damp has been missing.

Lower down again in the farming areas and on the coasts it is so dry that prickly pear cacti and succulents such as the houseleeks (Aeonium species) are having a hard time and are shrivelled and wilted. The winter is the growing and flowering season but this cannot happen without water.

In the usually drier and warmer south of the island in usual winters the volcanic hills there go green with vegetation and the north of the island becomes really luxuriant with plants and trees all at their best. This year many plants are brown and dead or dying. The ground is parched.

Grape farmers, and those growing other crops including bananas, have had serious trouble in recent years due to summer droughts but a winter drought is a new an unexpected problem. Obviously without water nothing will grow and even the toughest plants that are drought-resistant can only stand so much.

It is impossible to predict how bad this could get unless rains arrive soon. Water is still being used unwisely to water lawns and golf courses. What will happen when it starts to run out later on in the year as it is sure to do if it isn't replenished in sufficient amounts and soon?

Drought in the UK

The UK which is used to getting droughts in summer when there is a serious lack of rainfall is experiencing a shortage of rain and snow in autumn and winter too. Coupled with unusually mild temperatures this has resulted in flowers like daffodils blooming way ahead of their usual time for doing so. This flower has been seen in December in some parts whereas usually its yellow blooms appear in February and March. In Wales it is often used as an emblem to mark St David's Day on 1 March.

The BBC has reported on this drought problem and has explained that unless there is sufficient rainfall the problem which began last year will continue into 2012. The Environment Agency for England and Wales has stated that even if an average rainfall over the winter and spring period occurs that areas of central, eastern and south-eastern England are not likely to recover in full this year.

The British public hate hose-pipe bans that are enforced as drought restrictions in the summer but ways of combating the problem are having to be found before then.

Lack of rainfall is a disaster for many farmers but also has a terrible effect on many forms of wildlife. Ponds, lakes, reservoirs, streams and rivers that are low and not filling up will not be able to sustain the flora and fauna that depend on having a freshwater habitat.

People in the UK always moan about the terrible wet weather the country often gets but this year the rainfall is really needed!

Since this was originally written the year has become worse. The drought has continued, crops are dying, and on top of that Tenerife has been ravaged by fierce forest fires that made international news headlines.

A great deal of much-needed water was used in the fire-fighting efforts that went on for over a week and now there are reservoirs that are almost dry.

The residents of the island are praying for the usual autumn rains, and hopefully as soon as possible! 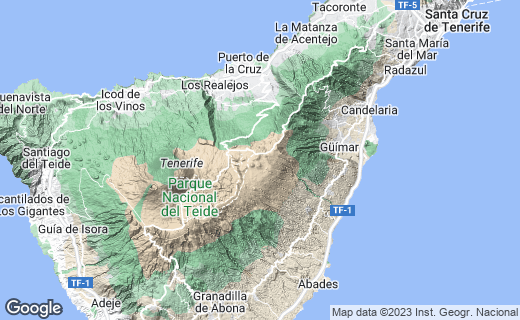