Through the years, gender roles have changed according to ever changing needs and cultural trend. However, two of the most fiercely ideals are of women as passive caregivers and homemakers, while men remain the aggressive protectors and bread winners.

Through the centuries many women have risen up to challenge this norm in many different ways. One such method was to take up arms and defend what’s dear to them in some of the fiercest ways possible. Although the motives were rarely to change how their gender was viewed, their actions still cast doubt on traditional roles.

There were many women warriors, but sadly, many of them had been written out of history or relegated glamorized characters of legend. These three women were lucky enough to have their stories backed up by official records.

Born to an O’Malley chieftain by the name of Owen in 1530, Grace was a strong willed child with a deep love of the sea. It was in her blood after all, as the O’Malley clan had been well known traders since 1123.

Although she had wanted to accompany her father on his trade routes, because she was a girl, he denied her. One story says that she got what she wanted by stowing away before he left. Another says that she’d chopped her hair off after he’d told her that she couldn’t go because it would get caught in the ropes. Either way, she eventually demonstrated her sea legs and took up the family business with him.

She did have a half brother, but when he was put to the test, he had neither talent nor interest for that path. Although girls of the day usually didn’t pursue such lives, especially noble girls, she managed to realize her dream.

With time, the ships under her command began to demand protection money from passing vessels. If they refused, they were plundered for everything they had. This practice is what earned her the nicknames of “Pirate Queen” and “Sea Queen of Connaught”.

At the age of sixteen, she was married to Donal an Chogaidh of Flaithbearlaigh (O’Flattery). This was not a marriage of love, but an arranged marriage for political reasons. However, she did bear him three children: two boys and a girl. Their names were Owen, Margaret and Murrough. 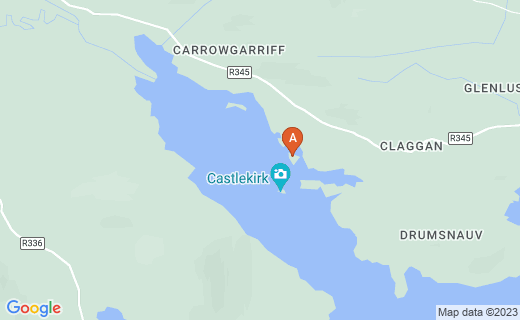 The location of Hen's Castle

After Donal had died in battle, the Joyce clan decided to take back a castle he had taken from them. Grace was able to drive them off and claim the castle for the O’Flattery clan. They were so impressed with her that they renamed it “Hen’s Castle” in her honor from the “Cock’s Castle” it had previously been known as after Donal’s personality.

After Donal had died, Grace moved back to her childhood home with the O’Malleys. Although she had been denied the O’Flattery property, she did take with her a loyal following of clansmen.

By 1566, she remarried Risdeard an Irainn Bourke, or Iron Richard. Again, this marriage wasn’t strictly out of love, but more of a strategic move on Grace’s part. She remained with him for the year required by Irish custom, then locked herself and her followers in his castle. While there, she ended their marriage by yelling out the window, “Richard Burke, I dismiss you.”

Having learned from her first marriage, she kept the lands she’d gained through her second marriage. Interestingly enough, her first husband, Donal, had Richard’s cousin killed so the man who came to be Grace’s second husband could become the chieftain of his clan.

However, the two had remained close enough to have a son together. She gave birth to the boy while out at sea, which earned the baby the nickname “Tibbot of the Ships”. Little Tibbot grew into a man who was later knighted as Sir Theobald Bourke.

Grace was not a woman who took threat to her baby lightly. The day after she had given birth, Turkish pirates had boarded her ship and attempted to take control. Her crew had been floundering until she came on deck and took part in the fight. The Turkish crew was eliminated and their ship brought into the Irish fleet.

Her struggles were far from over.

Hen’s Castle was targeted by the English for take over. Instead of allowing it, Grace held them off long enough for reinforcements to arrive and drive them off. Her methods were just as brutal as theirs and very creative. At one point in the battle, she had lead gathered from the roof, melted down and dumped on the heads of would-be invaders. They never attacked again.

Upon her show of force in protecting her castle and victory over the raiders, England knew it couldn’t ignore her any longer. Sir Richard Bingham had been sent to bring the opposition down.

During the course of doing so, he captured her and her son, Owen. Perhaps due to the fact that she was a woman, he set her free. Her eldest son was not. Bingham had him murdered.

Grace did not take her son’s death well. In fact, she unleashed her forces to make war on Bingham’s. After a few years of conflict, she sent a letter to the Queen of England for an audience. The Queen had responded a list of questions for her to answer, but before Grace could reply, Bingham had taken Tibbot and her brother captive.

Instead of simply writing another letter, Grace set sail for England to meet the Queen in person. Bingham had sent a letter at the same time, demonizing her, but regardless, Grace and the Queen got along famously. The Queen granted her requests and commanded Bingham to set her family free, and restore Grace what was taken.

Eventually, the Pirate Queen retired to Rockfleet and died there in 1603 – the same year as the Queen of England.

Centuries later and across the Atlantic, the Plains of the New World were in a state of turmoil.

The pristine lands were being colonized by pale newcomers who had brought with the rifles and disease. However, there was also conflict between the various native peoples as well.

One day, a Lakota warrior killed a Crow man. This man’s sister, The Other Magpie, was a wild and lovely woman. The death of her brother had impacted her deeply, and prompted her to ride into battle with the men and another woman warrior by the name of Finds And Kills Them. This battle was later known as the Battle of the Rosebud, in which General George Cooke lead infantry, cavalry, civilians, Crow and Shoshone Scouts against the Lakota and Cheyenne.

The Other Magpie carried no rifle, like the others in her party. Instead, she brought only a belt knife and her Coup Stick, on which her people kept track of heroic actions in battle.

Over the course of the battle, a Crow warrior, Bull Snake, fell. While Finds And Kills Them held enemies off with her rifle, a Lakota warrior attempted to claim the fallen fighter’s scalp.

Finds And Kills Them would be considered a Transgender Woman by today's terminology. Although she was born in the body of a man, she identified as female, dressed as such and lived as a woman. The Crow people were generally accepting of this gender identity.

The Other Magpie saw him coming, and charged him atop her horse. The sight of her waving Coup Stick and the fierceness of her war song sent the other Lakota running. Her target, however, fell victim to a blow from her stick. Shortly thereafter, Finds And Kills Them’s bullet took his life. The Other Magpie took his scalp – one of eleven from that battle.

She commemorated this accomplishment by tying a feather to the end of her coup stick. Later, she cut the scalp into smaller pieces and gave it to the others in her party so they would have more scalps for their post-battle dance.

Many cultures across the African continent recognized the power that women held. One such culture is the Ashanti. Yaa Asantewaa was the queen mother as Ejisu in the Ashanti empire.

It was during her time that the British came to take over her land. They had demanded the Golden Stool, which was the symbol of her peoples’ power. No one would tell them where it was, so they went from village to village trying to get the information.

In 1900, a party lead by Captain Armitage came across the village of Bare. Strangely, only children were present. Armitage ordered them beaten, and when their parents came out of hiding to defend them, he had the adults bound and beaten as well.

This act of cowardice set Queen Asantewaa on her path. During one meeting of the nobles, she stood up to them and stated that if they did not take action, she would rally the women under her reign and to take the place of the men.

This speech inspired action, and she lead a brutal three month siege against the British fort in Kumasi. The siege kept going until 1400 British reinforcements came to stop the rebellion. The foreign forces didn’t stop there. They went on to raid villages, murder countless civilians and confiscate land. Survivors had no choice but to rely on their new British rulers.

She was not forgotten, however. Since her death, the Yaa Asantewaa Girl’s Secondary School was opened, and a museum was dedicated to her in Ejisu-Juaben District during a festival in her honor. In 2006 a second festival was held in her honor.

These fighters, and countless others, challenged what women are ‘supposed’ to be. Today, women are still striving to change history and protect what they believe in.

Warrior Women Super Pack
Warrior Women is an outstanding series hosted by Lucy Lawless. She tells the stories of Grace O'Malley, Joan of Arch, Boudica, Mulan and many others. She also demonstrates some of the tactics they had used in some episodes.
Buy Now