A Bridge Too Far- the Battle for Arnhem

To me, this is one of the best historical war movies of all time. Not for the special effects or even for the acting (though both are superb) but for the story it tells, the desperate Battle for the bridge over the Rhine at Arnhem in Holland.

I was stationed in Germany not long after the movie came out and remember one day talking with a mate in my unit who told me that he'd actually been involved with the filming of the movie. Alfie was an ex tank driver and one day he was asked if he knew how to drive a Centurion tank. When he said yes he found that the next day he was being sent to Holland as the film crew there had six Sherman tanks they were using for the movie and the Sherman had the same cockpit layout as the Centurion. He drove one of the six tanks they used (all the rest were Landrovers with cardboard cutouts making them look like Shermans)

I first saw the movie not long after it came out in 1978 and what a treat it was. instead of the typical war movie that made out how great the allies were or how stupid the Germans were this was a movie that told the truth about one of the most important Battles of the second world war.

A few months later I got the chance to visit the place. I walked into a bar (wearing an American Army combat jacket) and before I could order a drink a beer appeared in front of me. Being a soldier I downed it and tried to find out who was buying. I was told 'It's our way of saying thank you!' (I was only 18 at the time) I pointed out that I'm not American but British and was told 'we're still saying thank you'

It's by far one of the best movies about ww2 and the one that tells where the reputations of the Airborne units were forged. Well worth watching over and over again.

This year it will be seventy years since the Battle for Arnhem took place. Many of the soldiers who fought there are no longer alive. But their legacy lives on.

The D. Day invasion was a spectacular success and the Allies had by now rolled all the way across France. They were virtually at the western banks of the Rhine. Germany's natural defense in the west.

But the allies had a major problem because since DDay they had not taken one French prot intact and the only way for supplies to reach the front was through the portable and (what was originally planned as temporary) port that they had built in Normandy some three hundred miles from the front lines. Their supply lines were stretched and vulnerable.

Just ahead lay the port of Antwerp (in Belgium) and a possible gateway into the heart of Germany itself. The door was open to finish the war by Christmas 1944 but what was needed was an audacious plan.

Field Marshal Montgomery (a notably cautious soldier) came up with a brave plan to parachute three Airborne Divisions along a line that would sieze all the bridges over the main forks in the Rhine delta.

What they didn't know was right at that time two SS Panzer divisions were re-supplying in Arnhem and the Germans were ready for them.

The plan was for the armour to take two days to reach Arnhem. But it took nine for them. the famous 2nd Battallion of the Parachute regiment did take the Bridge, but they were cut off from the rest of the Division and held out for four days before finally being overrun by the 10th Panzer division.

Nine days after the start the armoured column did make it to Arnhem but only able to evacuate the airborne units as pull back as far as Njimegan.

Some interesting facts about the battle and the movie

(1) The Bridge was so badly damaged in the Battle that it had to be rebuilt. the Bridge that was used in the movie was actually the next Bridge (A Bridge further on) The Bridge in town now is called the "John Frost Bridge" after the commander of the company who captured it.

(3) Sherman Tanks Only six Sherman tanks were used. All the rest were Landrovers made to look like Shermans (long before the days of CGI)

(4) Dakotas The DC3 was the workhorse of the Allied airforce and there are still many of this graceful old bird still flying. They only used a few for the movie with British decals on one side and and American ones on the other. 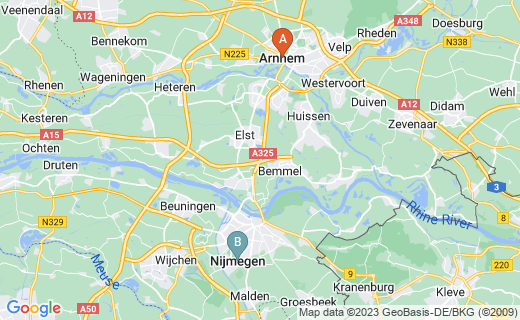 British 1st Airborne division were given this task

B
Njemegen:
Nijmegen, The Netherlands

The plan was simple and yet daring. Montgomery (the mastermind behind the plan) wasn't known for risky moves. He was a deliberate and careful planner, yet this was a bold plan that if successful could end the war in a matter of weeks.

The march through France had gone much faster than the Allies had planned, but not all had gone according to plan/ The Germans had managed to destroy every port along the North French coast meaning that all supplies were still coming through the temporary facilities that had been shipped from England just after D.Day

With Patton's 3rd Army poised on the Rhine in the south and Montgomery closing on Antwerp and the Rhine crossings Monty planned to take the Germans by surprise and instead of heading for Antwerp to head straight for the industrial heart of Germany. All he needed to do was capture the bridges over the Rhine.

Because they were seizing the lead up to Arnhem the 101st and 82nd got the bulk of the planes for the massive air assault. The British 1st Airborne would get the rest as well as gliders for the heavy infantry, not all of the 1st Airborne could be dropped the first day so the plan was to drop them a day after to re-enforce those on the ground and drop the Polish Brigade on the third day but Bad weather on the second and third day along with a disaster with the radios led to confusion and the re-enforcements weren't sent in for nearly a week, by then the British had lost nearly 8,000 men wounded, dead or captured.

The true story of the Battle

Historians have asked this question repeatedly. Hopefully to help the generals to not repeat the same mistake. Here is a summary of what we know went wrong