In the face of danger and adversity they display impressive courage for the greater good of all. They are Heroes. We have always had heroes and Beowulf, great Scandinavian warrior of the sixth century, is the ultimate hero.

He is not just any hero, but one of epic proportions. He displays courage, strength, loyalty, courtesy, pride and compassion . He travels great distances to prove his strength at impossible odds against supernatural demons and beasts.

But Beowulf is not a comic book invention. You won't see him on television. The story of Beowulf was spoken out, ringing in rhythmic beats, as people sat together telling tales a thousand years ago.

An Epic from England

One of the most renowned stories of earlier times, the tale of Beowulf has been passed through many generations of telling. It's a brilliant illustration of the Anglo Saxon period and has remained a true typical epic of its time.

The tales of the Ancient Greeks are well known to us, but the English heroes - apart from the legend of Arthur - are overlooked. Beowulf has come to us from an Anglo Saxon poem about events in Denmark, and it's just as thrilling as the story of Achilles.

The story of Beowulf is an adventure that's been told for a thousand years and it's still a ripping good yarn.

The Story of Beowulf - A Saga of Slaughter and Revenge

The Plot of Beowulf

The warrior Beowulf sets sail for the land of the Danes, where the King's Hall is plagued by a man-eating monster named Grendel.

One night, after a beer party,

the Danes settled in the hall

for sleep; they knew no sorrows.

The evil creature, grim and hungry,

At dawn, when the Danes learned

there was great weeping.

crying for his men. Bloody

That was bad enough,

but the following night

he felt no remorse.

(You can bet the survivors

The Meet the Monster

Grendel and his Mother

After some stirring action recounted in verse of strong alliteration and stressed syllables, we hear that Beowulf eventually kills Grendel. He than hangs the severed arm of the monster as a trophy in Heorot Hall.

But kill one monster and another steps forward to take its place. In true Anglo-Saxon fashion, the mother of Grendel, comes looking for revenge and to save her family honour. This society was strongly defined in terms of kinship; if someone happened to be killed, it was the duty of surviving kin to exact revenge.

She savages more and more warriors in the drinking hall until Beowulf tracks her down to the cold watery place where she lives and, swimming to the bottom, he battles and slays her too.

Wow! What an impressive tale! Julian Glover tells this thrilling story in a dynamic presentation which includes stanzas in the original English. Sir John Gielgud introduces the video.

To be heard, not read

Beowulf was above all a story told .. not a story that someone would read in the evening while tucked up by the fireside.

Listen to the sound the words make as you read them.

The paved road guided the men.

as they came toward the hall.

against the building's wall,

then sat down on benches,

They stood their spears together,

A Hero's Burial in the Barrow of Skalunda

Later in his life, when Beowulf is himself king of the Geats, he finds his realm terrorised by a dragon whose treasure had been stolen from his hoard in a burial mound.

With his group of companion thegns, Beowulf attacks the dragon. Failing to strike a mortal blow, Beowulf follows the dragon into its lair. His young cousin, Wiglaf, is the only warrior who dares to join him.

After a fearsome contest, Beowulf finally slays the dragon, but is himself mortally wounded.

Beowulf is then buried in a barrow by the sea -- identified by some archeologists as being at Skalunda.

This now puts Beowulf into the role of Dragon Slayer. The monster slayers of legend, especially in England, tend to be found at the origin of dynasties and land-claims.

The most famous monster-slayers, Perseus and Hercules, are the ancestors of the greatest royal lines; but closer to England, closer to Beowulf, the idea of monster-slaying was an integral part of the English peasant's view of a legitimate landlord family. But that's another story.

rode round the grave

(A warrior should do so

when his lord dies.)

among this world's kings,

the mildest, the gentlest,

the kindest to his people,

and the most eager

Beowulf: A New Verse Translation (Bilingual Edition)
Heaney keeps the clear simplicity of phrasing that is the English we use in everyday speech, jogging along in the rhythm of the Anglo-Saxon bard, the scop. There was Shiels Sheafson, scourge of many tribes, a wrecker of mead benches, rampaging among foes. This terror of the hall troops had come far
Buy Now 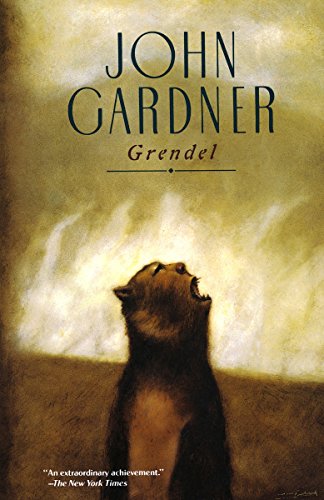 Grendel
When I was a child I knew all about Grendel. He was the bogeyman under the bed, and you knew him too, perhaps not by name, but certainly in spirit. Haunting, beautiful, captivating and at all times mysterious, the tale from Grendel's viewpoint.
Buy Now

Poets and Tale-tellers of the Anglo Saxons

Poets and story tellers were highly esteemed in the the Anglo-Saxon period of England. They were the historians of the tribe, the chroniclers of society who ensured that everyone remembered the important heroes, the war chiefs, the important battles and the folklore of the tribe.

Anglo-Saxon poetry, like the whole language itself, was an oral art - rarely written down, but recited as a song or as a riddle. Riddling was a popular pastime, and along with tongue-twisters, puns and all sorts of verbal wit, figured prominently in Old English.

* Caesura : Caesura is an audible pause that breaks up a line of verse.

We still love alliteration, it's a commonly used literary tool in English, tracing its origins back to Old English and other Germanic languages such as Old High German, Old Norse, and Old Saxon.

Remember this one from childhood?

How old is the Story of Beowulf?

Beowulf is an epic poem told in historical perspective; a story of epic events and of great people of a heroic past. But when? You'd be surprised at the number of scholars battling each other about the date of the event.

Various dates have been given for the origin of the tale, somewhere between the 8th and the early 11th centuries.

The poem is known only from a single manuscript, from the reign of Knut, the Viking king of England, Denmark and Norway, and one of the greatest figures of medieval Europe.

This places the actual manuscript in about the year 1010

Elaine Treharne, professor at Stanford University, has retold the story of Beowulf on Twitter.

Too good to be true? It's not. This is a wonderful retelling of the tale and you'll enjoy, and appreciate, it.

Monsters embody borderline concepts, things we worry about. Monsters are the things that trouble us at night

Monsters: Evil Beings, Mythical Beasts, and All Manner of Imaginary Terrors
Anthropologist Gilmore explains that far from being something alien and nonhuman, our monsters are our deepest selves.
Buy Now

The Destiny of the Hero

Who can say what produces a hero? Perhaps a hero is born. When you think about it, Hercules strangled serpents while still in his cradle, and as a boy Arthur unthinkingly drew forth Excalibur from the stone. These heroes acted on instinct, not from training in ethics or swordplay, it was their destiny to be heroes.

So Beowulf the Dragon Slayer, Warrior and Hero, found his true destiny which every Hero instantly recognises. In the end his fate was great and memorable. Quite unlike that of you or me.

History can be found through our stories. In every era they reveal the prevailing cultural attitude.

In that time when the folk would sit around over a meal listening to the scop reciting the epic stories, it was men of outstanding courage and loyalty who were admired. Much was made of physical bravery, selflessness, and the gravity of an oath. And honour was more important than any temporal comfort.

But that was long ago. All we have left are the stories.

The story of Beowulf has meaning for us today.

Hans Westra has created carvings and masks from Beowulf. Each piece of art is based on a few lines from the epic story.

Beowulf and Grendel takes you into a world of fable and myth, a world where men, larger than life, stride along the border of light and dark, beset by evil.