The American and British peoples are in theory bonded by a common language - English. While translators are unlikely to be required in across the pond communications (regional accents notwithstanding,) this does not mean to say that there are not considerable differences in the ways in which English is both spoken and written on different sides of the Atlantic Ocean. Spelling and pronounciational differences are commonly known to all who have ever had any form of contact with their trans-Atlantic counterparts but there are a huge number of other differences which may be of considerable surprise to many people. Words used in every day life on one side of the Atlantic either have no meaning on the other - or have a very different meaning altogether. While it is not possible to be exhaustive, this page will examine some of the more common differences between American English and British English and hopefully prove informative and educational in at least some small way.

The spelling differences between American English and British English are likely to be among the most common noticed in every day life. The good news about these differences is that more often than not they follow a recognisable pattern, if not in fact a strict rule. A lot of these patterns are centred around four particular letters in the alphabet: l, s, u and z. The differences in these instances of course are also likely to be but a minor irritation at worst and almost never actually lead to a misunderstanding of the meaning of any particular word.

The differences employed with regard to the letter l are simply that in a lot of American spellings, the letter will appear only once, whereas in British English a double l will be employed. Common examples of this can be seen below.

The differences with respect to the letter u are again fairly straightforward. They relate most commonly to where this letter is made to follow the letter o in the spelling of many words in British English but is eliminated altogether in American English. Once again, some common examples of these discrepancies can be seen in the table below.

The Letters S and Z

The letter z is used far more commonly in American English than it is in British English. There are many words which are pronounced on both sides of the Atlantic as though they contain this letter but in British English the words will instead be spelled using the letter s. There are more exceptions to this rule than there are in the previous two examples and considerable confusion can often arise as to which letter should in fact be used, particularly for native British English speakers attempting to use American spellings.

The final example in the table above, optimization/optimisation, hints at a whole new relevance to the differences between American English and British English which has come to the fore in recent years. Usage of the Internet is to a very large extent governed by search engines, whether that be for people searching for information or those looking to provide it. The difference between the spelling of certain words and particularly where the words differ altogether can have a major impact for British Internet content producers writing for the much larger American market. This is generally realised by regular British online writers and many use American spellings and words, either some or all of the time, for this simple reason.

It is not always apparent that the opposite may well apply and that American writers may be required to use British English. One example of this would be where an American travel writer is trying to encourage British people to visit the United States. It would be very desirable for them to use British spelling to be found on the UK search engines but it would be of vital importance for them to know that British people take holidays and not vacations...

There are many differences between the names for both raw ingredients and for completed recipes between American English and British English. Some common examples are featured to the right but it is worth looking in greater detail at one in particular and that is the herb/spice, Coriandrum sativum. In British English, the leaves of this plant are known as coriander, while the seeds are called simply coriander seeds. In American English, the leaves of the plant are referred to as cilantro (which is actually the Spanish translation of the word, coriander) while the seeds are referred to as coriander. As the tastes of the leaves and seeds are very different, this is important for all trans-Atlantic recipe followers to remember.

The American and British imperial measurement systems have several differences but probably the most notable is intrinsically linked with food and cooking. Although one American fluid ounce is very similar in quantity to a British one, an American pint has sixteen of them while a British one has twenty. The implications here when following a recipe could potentially be disastrous.

It is not only many of the parts of a car which have different names in American English and British English. While trunk/boot, hood/bonnet and gas pedal/accelerator can cause confusion, there are many more differences which will be encountered by anyone venturing across the pond and actually heading out driving.

It is fairly common knowledge that while Americans drive on the right, British people drive on the left but confusion can arise in many other ways. A gas station in American English is a petrol station in British English, a parking lot is a car park. a freeway is a motorway and all British roads are toll free.. Differences of this type could lead to particular problems in many instances and the discrepancies are worth investigating in full by anyone driving in these unfamiliar surrounds.

There are a number of ways in which the inside of buildings and their fittings and furnishings can cause confusion between American English and British English. One is the way in which floor levels are numbered. In American English, the first floor will be that which is at ground level, whereas in British English this will be the ground floor and the first floor is the first above ground level. This difference is progressive, with an American third floor being a British second floor and so on. 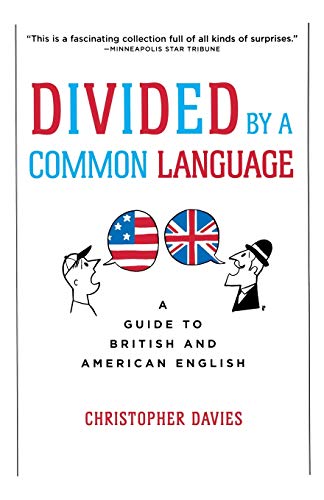 Divided By A Common Language: A Guide to British and American English
The author of this work looks deep in to the language and cultural differences on opposite sides of the Atlantic. In a guide that may prove invaluable to those looking to venture across the pond, he notably considers those words and expressions which, although innocent on one side of the Atlantic, are anything but on the other. This book even takes the language discrepancies further by throwing Canadian, Australian and New Zealander English in to the fascinating melting pot.
Buy Now

Thank you for visiting this page and taking the time to look through it. I hope that it has helped to clear up more confusing issues than it has been responsible for causing and that you feel your time spent here has been worthwhile. This is of course a mere sample of the differences between American English and British English and even those who consider themselves fairly familiar with the discrepancies may be interested in finding more detailed information from the book featured to the right. There are probably but a tiny minority who can discount a surprise or two lurking somewhere just around the corner...

Any comments or feedback which you may have can be left in the space below.