Let's set the record straight here from the beginning. Annie Oakley was a sharpshooter. She was a show woman. She was a world traveler.

What she wasn't was a cowgirl or even part of the Wild West. Born and raised in Ohio, she never lived west of the Mississippi - no matter how many TV shows or movies you see that portray her that way. This doesn't make her any less impressive. It just goes to show that Bill was a better spinmaster than most.

"My mother and sisters thought my prowess with the gun was just a little tomboyish."

Yep - that's really her!!! It's so cool to me that she lived long enough to be immortalized on film. It's hard sometimes to see historical figures as living, breathing creatures. They become pictures on a page or a modern actress playing dress-up rather than a real person.

One of Annie's best known tricks was the over-the-shoulder rifle shot.

Annie was nicknamed "Little Sure Shot" and spent a great deal of her time in retirement passing on her knowledge to others. She trained women and soldiers up and down the east coast on marksmanship.

Carrying on her tradition is the Annie Oakley Sure Shots. 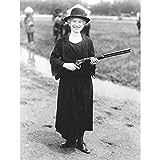 Annie Oakley: What Do You Think?

I'm going to plead youth here, but I had no idea there was an Annie Oakley TV show!! It starred Gail Davis, was totally inaccurate historically and ran for 81 episodes. Can't wait to see it myself. Oh, and there was also a comics series based on the TV show. Here's the opening segment for you, and the show's now out on DVD - five seasons worth.

Annie Oakley: Did You Know?

Back before the days of computers, theaters would punch holes in tickets that were given out free to media or friends of the actors. The holes helped them separate paid tickets from free when it came time to count the box office. These punched tickets were called "Annie Oakleys" due to their resemblance to playing cards Annie purportedly shot holes in during her act.

"God intended women to be outside as well as men, and they do not know what they are missing when they stay cooped up in the house."

Who Was Annie Oakley?
About 100 pages with plenty of hand-drawn pictures in there as illustrations. One thing I do like about this one is the timeline of world history to help a kid put Annie's life into context with other things they are learning about history. Perfect for about a third-grade level depending on your child's reading ability.
Buy Now

Shooting For The Moon: The Amazing Life and Times of Annie Oakley
Picture book bio of Annie with absolutely gorgeous artwork by Bernie Fuchs. More paintings than the typical kid's book illustrations you're used to seeing. It's listed as being for K-Gr3, but the amount of text on the page makes it a read-together book for younger kids.
Buy Now

Annie Oakley (Robbie Readers) (What's So Great About?)
A real overview of her life. This one makes a great starting point for a history project, though, as the back of the book includes a bibliography of sources, as well as places on the internet to find more information. (Like this page, maybe?) Of course, the internet part could get out-of-date quickly, so don't rely on it for giving you all your sources.
Buy Now 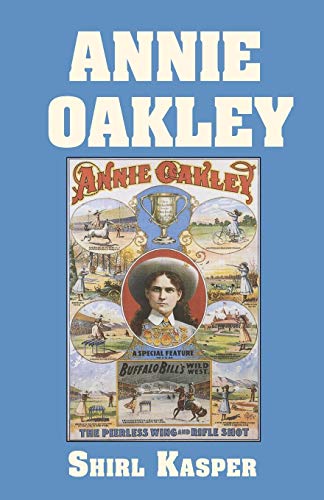 Annie Oakley
Non-fictionalized version that tries to get at the true story of the woman. Definitely for older kids as there are illustrations and photos included, but not many for a book that's more than 200 pages.
Buy Now 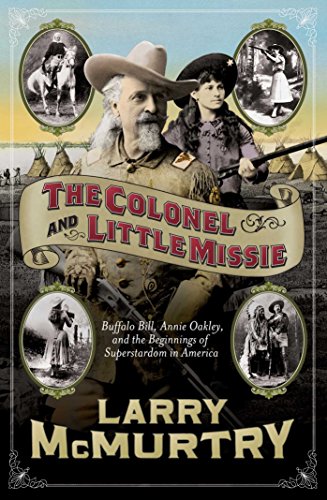 The Colonel and Little Missie: Buffalo Bill, Annie Oakley, and the Beginnings of Superstardom in America (includes 16 pages of B&W photographs)
By the great western writer himself - Larry McMurtry. Reads like a bio, but with a lot of personal opinion and reflections mixed in. Again, better for older kids and adults looking to get a look at her entire life. Sweeping is typical for McMurtry, who covers just about every tiny aspect.
Buy Now

Annie Oakley: On Stage and Screen

Annie Oakley was America's first female "superstar" so it's only fitting that she was played by some of the biggest stars out there in various portrayals of her life. Often exaggerated, rarely accurate portrayals, but all fun nonetheless.

Annie Oakley: Movie of Her Story

Annie Oakley: Annie Get Your Gun

Annie Get Your Gun
Buy Now 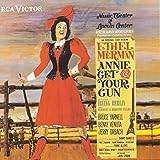 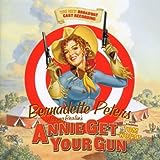 Annie Oakley: Clips from Annie Get Your Gun

"I am, indeed, very grateful for your many kind words in my obituary. How such a report started I do not know. I am thankful to say I am in the best of health."

Annie Oakley: Where to Learn More

A history of Annie and Frank Butler that covers much of what happened to them after they retired to Cambridge.

Seeks to provide accurate information on the life and legend of Annie Oakley, to disseminate educational materials, and to create and maintain the Annie Oakley Education, Cultural and Sports Activity Center.

Annie Oakley: Got Something to Say?